Inspired by Adrian Vermeule’s essay, “Beyond Originalism,” and to assuage the rankled feelings of right-liberals, who only muster up the tired reductio ad hitlerum as a counterargument, I propose a theory of common-good constitutionalism that fits comfortably within the dynamics of originalist thinking. To do this, we first look at the philosophic principles that animate the Constitution. 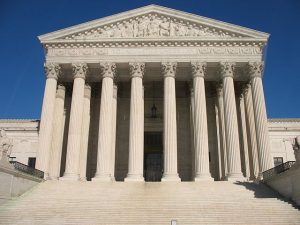 It’s axiomatic by now that originalism and positivistic textualism (a variant of originalism) are based on Enlightenment anthropology and political philosophy. What does this mean in a nutshell? Cue Locke and Hobbes. In these philosophers’ hypothetical state of nature, every man and woman is at enmity, each striving to individually attain his or her own desires over and against the others. To illustrate, imagine that persons A, B, and C wage endless war to kill and steal each other’s bananas. Their lives are solitary, poor, nasty, brutish, and short. They continue their fighting and banana-stealing shenanigans until D, a particularly muscly fellow, shows up. A, B, and C fear D more than they fear each other—for D might steal their bananas and end their lives. To prevent this, A, B, and C form the mystical social contract by which they consent to protect one another from the perceived threat of D. In defending their self-interests, A, B, and C form an association that allows them to keep their bananas.

By operation of a kind of natural law of autonomy-maximization, the human race progresses from the state of nature to primitive arrangements to ever larger and more complex associations of individuals each pursuing their own preferences, limited only by what the given association proscribes. And this is an important point. Solidarity and moral law do not bind together or advance these non-communitarian associations; only the perpetual and restless desire for power after power, that ceases only in death. This is the dignified anthropology and political philosophy that underlie the Founders’ legal machinations. (Even the Founders’ theory of natural law is autonomy-oriented and, to the extent they talk about virtue, it’s in service to a deified conception of life, liberty, and property and not, say, the Trinity.)

Case in point, Madison, in describing why the federal government ought to have a tripartite division of operations, claimed that attaining the public good was contingent on opposite and rival interests being set against each other and ambition counteracting ambition. So, it was understood at the outset of the American experiment that the executive, legislature, and judiciary would (like A, B, and C) seek their own interests—the idea being that, when one branch of government pursued its preferences beyond what the other branches deemed acceptable, they would reign it in by asserting their own desire for power and thereby preserve the mystical social contract. Whether Madison’s words were descriptive or prescriptive is neither here nor there. The three branches of government were nonetheless expected to secure the public good, not through the attainment of virtue, social harmony and friendships, or obedience to a higher law, but by pursuing self-aggrandizement. In other words, the natural law of autonomy-maximization kicks in.

And herein lies the grand error at the heart of right-liberal originalist thinking. Judges do the nation no favor by arbitrarily restraining themselves. In fact, they do the nation a disservice on originalist terms. The Founders designed the three branches of government to advance the interests of the people by pursuing their own power. As Madison eloquently put it, ambition counteracts ambition. Blind faith in the iron law of autonomy-maximization, to the gods of life, liberty, and property, to the political theology of the Founders, demands that judges constantly strive to aggregate power in their own branch of government. The originalist argument for high-minded self-restraint is, at bottom, a non-originalist attempt at injecting petty moralism into a system engineered to thrive on amoral contention. The so-called progressives on the court are, really, the true originalists for constantly seizing more and more power unto themselves—the power to define marriage, the parameters of reasonable religious belief, and even life and death. And predictably, they’ve defined them in liberal terms.

The solution: conservative judges must reject the role relegated to them by the liberal legal culture and instead embrace the authority given to them by the Founders. Rather than straightjacket themselves in liberal proceduralism and methodology, forward-thinking jurists must exploit the flaws in liberal anthropology and political theory to introduce a new conception of man and politics. In other words, they have to change the rules of the game. The risks are minimal, but the rewards are potentially great. At worst, one of the other branches will try to regulate the judiciary—and this has its limits. But at best, these judges will establish a new, intellectually robust legal culture grounded in realistic assessments of human nature and natural morality. And there’s no “originalist” reason not to.

Fear, libertinism, and the will-to-power don’t have to be the underlying principles of American jurisprudence. Friendship, noble aspiration, and a courageous love for truth can be. These things are worth the risk of smears and insults. If conservative jurists continue to cling to a non-originalist originalism, they only delay the law’s decline into a suffocating morass of liberal platitudes. Not only would these jurists fail to meaningfully participate in the conflict-driven structure of the American political system, they would also fail to protect every substantive precept of morality and justice they claim to hold dear. Now is the time for a better jurisprudence.

Dan Whitehead is an attorney in the DC-metro area interested in political theology.