On Goats, and What to Do 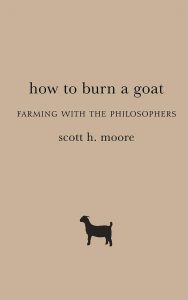 In a brief volume of shorter meditations and several more extended essays, Scott H. Moore, a philosophy professor at Baylor University, uses pithy stories to illustrate the differences between techné and phronesis, the classical virtues that can be described, respectively, as “the skill to do a thing” and “practical wisdom.” As is true of most tales worth telling, the events that underlie the stories are generally full of stress when they happen. It is because of the craziness of chasing a spooked heifer through a parking lot, or trying to pick up a snake with a paint roller pole (only to end up throwing it toward his wife) that the author can in retrospect focus on the essential differences between knowing how to do something (techné) and what should be done (phronesis).

Moore’s writing is entertaining and clear. He has a narrative gift combined with the technical training of a philosopher that allows him to clearly identify and analyze premises in thinking. The book begins with a series of short meditations that essentially illustrate what the philosopher-turned-farmer doesn’t know about farming (the failures in techné). But as the book proceeds, the meditations themselves are transformed into essays that use philosophical methodology to explore the phronesis not just of farming, but of living in a society that is increasingly so enamored of techné that it is forgetting that purpose, meaning, and perhaps even survival will be determined by what to do, and not just what can be done and how to do it.

Moore is a professed Christian, currently a rarity in a philosophy department. He writes, therefore, in ways that are critical of much modern academic philosophy, a discipline that has come, in many cases, to define “truth” with reference to methodology. While the author does not explicitly reference truth as an objective reality, his Aristotelian framework of analysis and discussion assumes this. He makes only passing references (and few) to Christian sources of authority, but his discussions are essentially grounded in the traditions of Scholasticism, of how the Church in effect baptized classical learning into a theistic frame of reference.

The reader who is uncomfortable with, or dismissive of, matters of faith, need not be concerned, except to the extent that having to ask ourselves tough questions always poses a challenge. Moore is meditative, not one to preach. He invites the reader into a process of thinking about how to live. He even appears to avoid many obvious Christian sources and teachings. For example, in his essay on “Doing It and Getting It Done,” Moore discusses how we are to engage each task for what it is, and not simply for the desired outcome. The point he makes is essentially to enjoin a Benedictine approach of labore est orare (“to work is to pray”), and the fact that his farm is named for St. Benedict should at least give us a hint. But the author does not quote the Rule of St. Benedict, and his few quotations from Scripture throughout his essays are no more than illustrative. His task is to think about how we shall live, and to invite the reader to do so. The problem he poses is that we have become so enamored of techné that we are no longer asking the right questions about what to do. We are allowing the latest app to become alternately an idol or a false hope. Moore’s hopeful book serves as a good inoculation against such thinking, and itself provides hope—while furnishing both humor and repeated challenges to pay attention—to focus outside the self, and enjoy life from a perspective far fuller from that of consumption. Read this book because you want to think about how we live.

The Rev. Dr. Karl C. Schaffenburg is a retired Episcopal priest serving in parish ministry in Mississippi, having previously served in legal, policy and intelligence roles in the pharmaceutical industry in the United States and Europe. Fr. Schaffenburg has previously authored reviews and policy analyses in Russian and Irish political culture, philosophy, history and cultural criticism. His education is in law and theology.