Russell Kirk authored thirty-two books on political theory, the history of ideas, education, cultural criticism, and supernatural tales. Both Time and Newsweek have described him as one of America’s leading thinkers, and The New York Times acknowledged the scale of his influence when it wrote that Kirk’s 1953 landmark book The Conservative Mind “gave American conservatives an identity and a genealogy and catalyzed the postwar movement.” 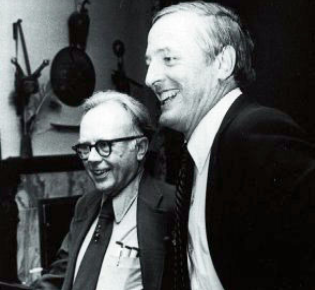 Kirk and William F. Buckley, Jr., during his visit to Kirk’s home to ask him to write a column for National Review. Called “From the Academy,” Kirk’s column on education attracted a national readership for 25 years.

Kirk was born near the railroad yards at Plymouth, Michigan, in 1918 and lived much of his life at his ancestral place, Piety Hill, in the village of Mecosta, Michigan. There he converted a toy factory into his library and built an Italianate house adorned with sculpture and architectural antiques repurposed from demolished buildings in Western Michigan.

After receiving his bachelor’s degree from Michigan State College (now University), Kirk studied the politics of John Randolph of Roanoke for his master’s degree at Duke University. Kirk’s research on Randolph’s politics led him to discover the far more powerful thinker, Edmund Burke, whose principles would strongly influence his subsequent thought. 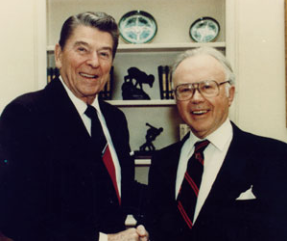 Following service in the army during World War II, Kirk became an instructor in the history of civilization at Michigan State. He took a leave of absence from teaching to research the history of the principal thinkers of England and America at the University of St. Andrews in Scotland.  The resulting manuscript earned Kirk the highest arts degree, the doctor of letters, from the University of St. Andrews.

Henry Regnery published this lengthy work as The Conservative Mind in 1953. The book became one of the most widely reviewed and discussed studies of political ideas in America and catapulted Kirk to national prominence. In The New York Times Book Review, Gordon Keith Chalmers wrote that “the author of The Conservative Mind is as relentless as his enemies, Karl Marx and Harold Laski, considerably more temperate and scholarly, and in passages of this very readable book, brilliant and even eloquent.”

Kirk considered the book an intellectual genealogy of great British and American thinkers–such as Edmund Burke,  John Adams, James Fenimore Cooper, Nathaniel Hawthorne, and T. S. Eliot–and demonstrated that a vital and respected conservative tradition was central to the American experience.  The book has gone through seven editions and continues to be translated into foreign languages to the present day.

Following the success of The Conservative Mind, Kirk resigned his teaching post and moved to Mecosta, Michigan, to pursue a career as an independent writer and lecturer. He continued to publish books at a remarkable rate during his long career,  among them Prospects for Conservatives, The American Cause, Academic Freedom, The Roots of American Order, Edmund Burke: A Genius Reconsidered, Enemies of the Permanent Things, Decadence and Renewal in the Higher Learning,  America’s British Culture, and The Politics of Prudence. He became widely recognized as a formidable literary and social critic for his book Eliot and His Age:  T. S. Eliot’s Moral Imagination in the Twentieth Century (1971). In addition, he wrote three novels and three volumes of collected short stories and contributed essays and reviews to more than a hundred serious periodicals both in the United States and abroad.

Kirk wrote a bi-monthly page on education, “From the Academy,” for National Review for twenty-five years; and a newspaper column, “To the Point,” through the Los Angeles Times Syndicate for thirteen years. He was the founding editor of the educational quarterly  The University Bookman, and of the quarterly Modern Age, both of which continue today as lively journals of opinion and scholarship. 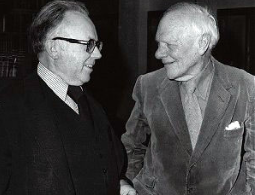 Kirk and Malcolm Muggeridge converse during Muggeridge’s seminar at the Kirk home called “Pilgrims in the Dark Wood of our Time.”

When not in his library in Mecosta, Dr. Kirk lectured at colleges and conferences around the country on political thought and practice, modern culture, educational theory, literary criticism and social themes.  He especially enjoyed addressing college audiences, believing strongly that the key to the lasting triumph of conservative ideas lay in shaping the cultural and moral beliefs of the rising generation. He addressed audiences on hundreds of American campuses as well as debated with such well-known speakers as Norman Thomas, Arthur M. Schlesinger, Jr., Eugene McCarthy, Malcolm X, Dick Gregory, and Tom Hayden. Dr. Kirk was visiting professor at several universities in the disciples of history, political thought, humane letters, and journalism.

At various times, Kirk was a senior fellow of the American Council of Learned Societies; a Constitutional Fellow of the National Endowment for the Humanities; a Fulbright Lecturer in Scotland; a Guggenheim Fellow; and a distinguished scholar of The Heritage Foundation.   The Christopher Award was conferred upon him for Eliot and His Age, and he received The Ann Radcliffe Award of the Count Dracula Society for his gothic fiction.  The Third World Fantasy Convention gave him its award for best short fiction for “There’s a Long, Long Trail a-Winding.” He received the Weaver Award of the Ingersoll Prizes for his scholarly writing. In 1989, President Reagan conferred on him the Presidential Citizens Medal. 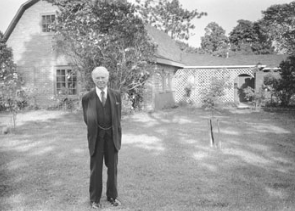 Kirk outside his library at Piety Hill (1993) where he wrote, held seminars, and guided the many Fellows and visiting students for forty years.

For nearly thirty years, Kirk was married to Annette (nee Courtemanche); they had four daughters: Monica, Cecilia, Felicia, and Andrea. Together they hosted refugees from Communist countries, university students, and scholars at their home. The Kirks held frequent seminars at their residence and received several literary interns every year.

Dr. Kirk passed away on April 29, 1994. His own account of his life, The Sword of Imagination: Memoirs of a Half Century of Literary Conflict, was published in 1995. His work is continued by The Russell Kirk Center for Cultural Renewal.

“The elaborate fabric which we call our civil social order–the complex of moral habits, political establishments, customary laws, and economic ways–has been erected over many centuries by a painful and laborious process of trial and error. It is the product of filtered wisdom….” 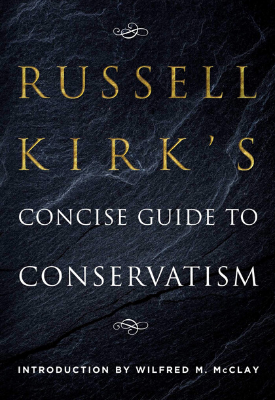 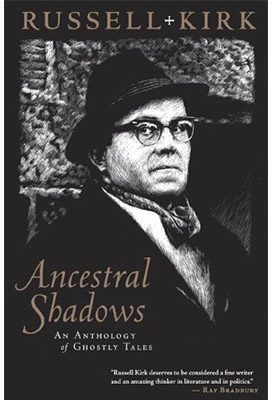 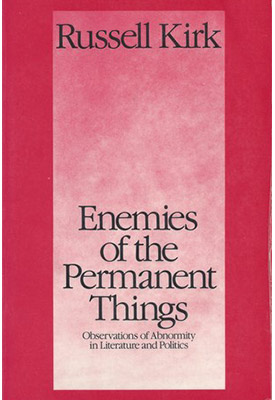 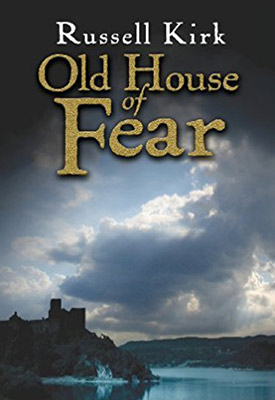 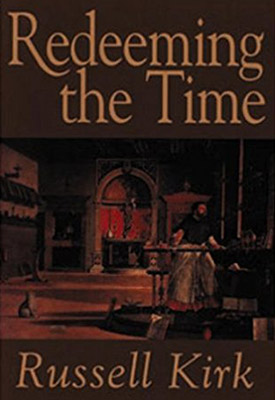 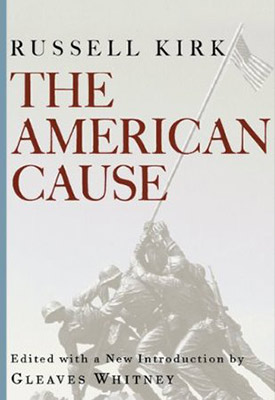 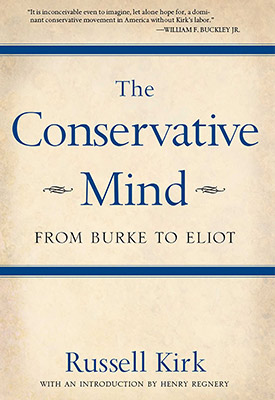 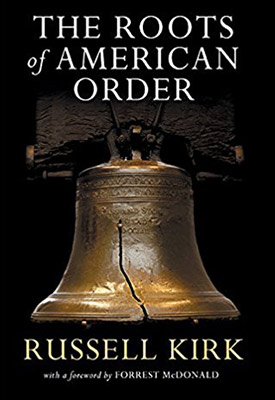 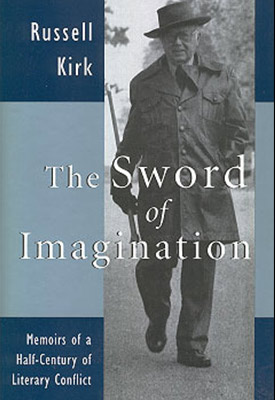 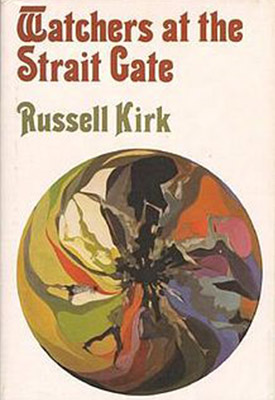 The Conservative Mind: From Burke to Eliot

Academic Freedom: An Essay in Definition

Beyond the Dreams of Avarice: Essays of a Social Critic

Confessions of a Bohemian Tory

The Intemperate Professor, and Other Cultural Splenetics

The Political Principles of Robert A. Taft (with James McClellan)

Enemies of the Permanent Things: Observations of Abnormality in Literature and Politics

Eliot and His Age: T. S. Eliot’s Moral Imagination in the Twentieth Century

The Roots of American Order

Decadence and Renewal in the Higher Learning

The Portable Conservative Reader, edited with introduction and notes

Reclaiming a Patrimony: A Collection of Lectures

Economics: Work and Prosperity (a textbook)

The Politics of Prudence

The Sword of Imagination: Memoirs of a Half-Century of Literary Conflict

A Creature of the Twilight: His Memorials*

The Princess of All Lands*

Lord of the Hollow Dark*

Watchers at the Strait Gate*

Off the Sand Road: Ghost Stories*

What Shadows We Pursue: Ghost Stories*

Kirk edited many volumes in The Library of Conservative Thought, published by Transaction Books, now available through Routledge.

For a complete list of all the sixty-eight books to which Kirk wrote critical introductions, forewords, and prefaces, see Russell Kirk: A Bibliography, by Charles Brown (ISI Books, 2011).

In Reappraising the Right, George Nash says that the “significance [of Kirk’s book] for American conservatism was to demonstrate that intelligent conservatism was not a mere smokescreen for selfishness. It was an attitude toward life with substance and moral force of its own. . . . After the appearance of The Conservative Mind, the American intellectual landscape assumed a different shape. Kirk’s tour de force breached the wall of liberal condescension. He made it respectable for sophisticated people to identify themselves as men and women of the Right.”
-George Nash, Historian

“Russell Kirk shaped my life—I think without his ever knowing it. I was an assistant professor at Indiana and quite determined to spend my life on the most important of all research—on the Ruler Cult of ancient Rome—and to determine whether or not the Romans believed their emperor was a god. And that’s what I was going to do. Then I heard him [Kirk] lecturing on the philosophical historian. From then on I realized that there was more you could do in life and actually you could grow intellectually, spiritually, and morally.”
– Dr. J. Rufus Fears, Professor at the University of Oklahoma

“The late Russell Kirk offered advice for this rising generation. ‘Redeem the time,’ he said. Redeem the dream – – in ways mundane as well as ways spiritual. ‘Begin by brightening the corner where you are. By improving…yourself, and helping your neighbor. You will not need to be rich or famous to take your part in redeeming the time: what you need for that task is moral imagination joined to right reason.’ … ‘Moral imagination joined to right reason.’ What a concise definition of conservatism. And the perfect guideline for success in things great and small.”
– Mike Pence, Then-Congressman, Delivering a Speech Entitled “Redeem the Dream”

“In paying tribute to Dr. Kirk, I acknowledge my indebtedness to the man who first opened my mind to conservative thought. That occurred when I was in high school, working at a summer job that involved a lot of sitting-and-waiting, during which I read the very book whose publication date is marked today. For many years after that I was nourished by his other books, and by the scholarly journals The University Bookman and Modern Age that he edited. I once enjoyed the pleasure of visiting both of you—in connection, I believe, with a seminar sponsored by the Intercollegiate Studies Institute—at your famous Piety Hill home. No one has had a greater role in the formation of American conservative thought. And no more courteous (indeed, courtly) a gentleman, nor one more devoted to the United States of America, could be imagined.”
-Justice Antonin Scalia

“Dr. Kirk helped to renew a generation’s interest and knowledge of the underpinnings and intellectual infrastructure of the conservative revival of our nation. The values and ancient truths of our civilization have been the focus of his powerful intellect in such major works as The Conservative Mind and The Roots of American Order.”
– President Ronald Reagan

“Russell Kirk was instrumental in popularizing the 18th-Century Irish politician-philosopher, Edmund Burke, who he told me during a youthful visit to Mecosta ‘everyone must read.’”
– Jon Meacham, Journalist and Biographer

“I became familiar with Russell Kirk when I was pursuing my Master of Letters degree in English at Oxford University some 30 years ago. I wrote a thesis on the political philosophy of T.S. Eliot, and of course in the process of researching that project I read Dr. Kirk’s masterful book The Conservative Mind: From Burke to Eliot. I left graduate school a journalist rather than an English professor, and as I got deeper into covering politics, I came to understand Dr. Kirk’s lofty place in the intellectual history of the American conservative movement. When TIME asked me to write an essay on the state of the conservative movement today, I decided to focus on the philosophical tensions that now exist between the heirs of Kirk and the currently ascendant libertarian wing of the movement. There is a radical edge to some of today’s libertarianism—an individualism so extreme that it is off putting to all but the disciples of Ayn Rand. A reading of Kirk serves to remind conservatives that their movement is also rooted in ideas of order, humility, community, and faith.”
– David Von Drehle, Journalist and Writer for Time Magazine