Russell Kirk was born on October 19, 1918 in Plymouth, Michigan. Renowned as the father of modern American conservatism, he was a historian of ideas, biographer, literary scholar, editor of serious periodicals, columnist, social critic, and frequent speaker on college campuses. For a concise biography of Dr. Kirk, comments on his legacy, and a featured essay, visit the about Russell Kirk page.

This year, the Center celebrates the centennial of his birth with a number of events and publications focused on Dr. Kirk’s life and work. 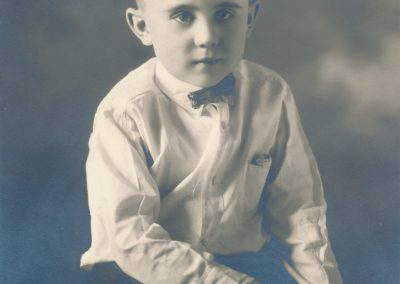 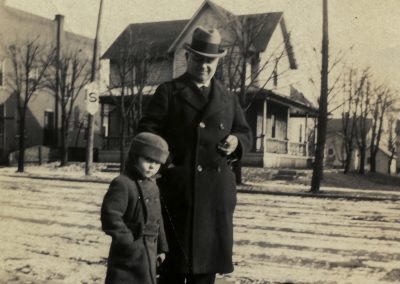 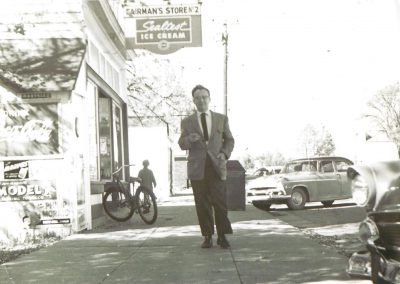 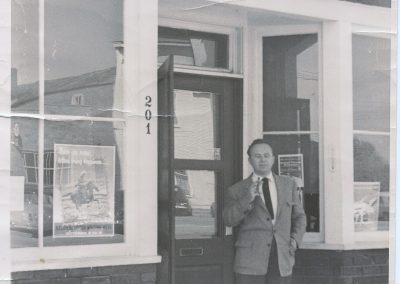 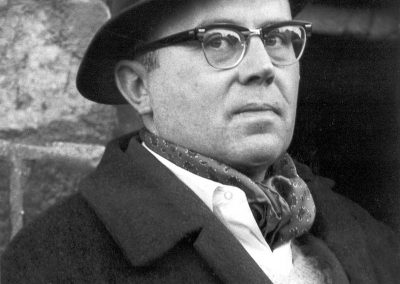 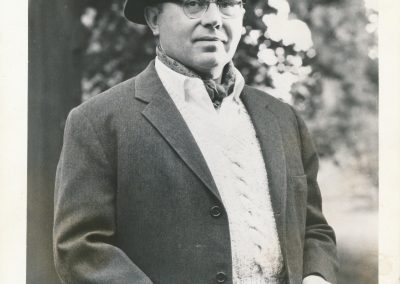 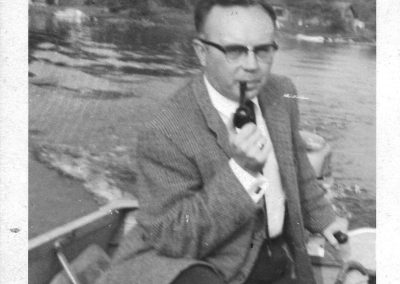 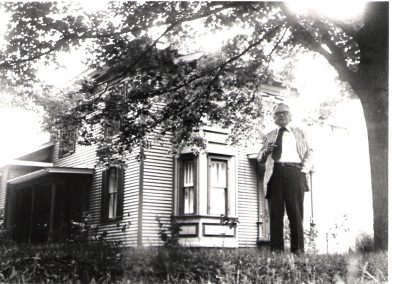 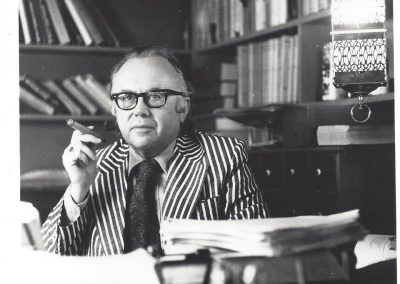 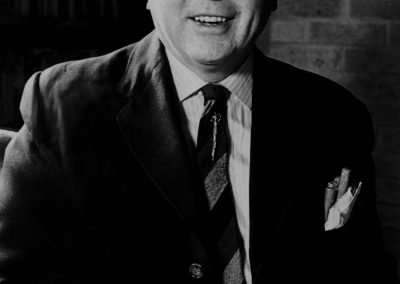 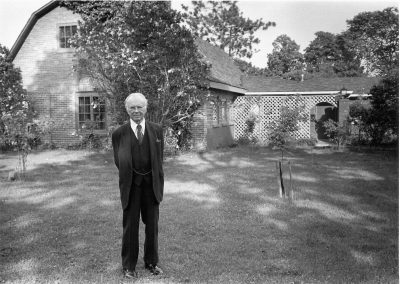 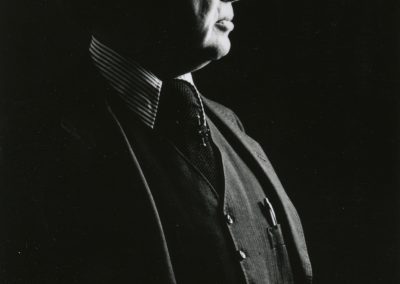 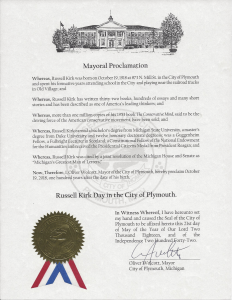 By Mayoral Proclamation, the date of October 19 was declared “Russell Kirk Day in the City of Plymouth.” The Plymouth District Library hosted a capacity audience for a presentation on “Russell Kirk: Son of Plymouth and Mecosta” by James Person, editor of Imaginative Conservatism: The Letters of Russell Kirk (University of Kentucky Press, 2018). The presentation included several rarely-seen photographs of Russell as a boy in the old town section of the city in the 1920’s. Following the lecture, the audience enjoyed a delectable cake designed to resemble Kirk’s four most popular books.

Centennial Events Around the Country

October 12 | “Conservative Confusion: Why We should Read Russell Kirk in 2018,” lecture by Bradley Birzer, professor of history and the Russell Amos Kirk Chair in American Studies at Hillsdale College. This event is part of the McConnell Center’s “American Political Culture” lecture series inspired by Alexis de Tocqueville’s Democracy in America. The University of Louisville, Kentucky.

November 13 | “Kirk, Conservatism, and the Next Century,” panel discussion with John O’Sullivan, editor-at-large of National Review, Gerald Russello, editor of The University Bookman, and Daniel McCarthy, editor of Modern Age. As an historical note, Dr. Kirk wrote a column on education for 25 years for National Review, and founded both The University Bookman and Modern Age, journals which continue to flourish today.  Co-sponsored by the National Review Institute. New York City Union League Club. The event was filmed by C-SPAN and can be viewed here.

November 17 | The Edmund Burke Society met to consider the topic “Edmund Burke, Russell Kirk and Revolution in the Modern Mind” at Belmont Abbey College in North Carolina. Wilfred McClay, Chair in the History of Liberty at the University of Oklahoma, gave the keynote address entitled “A ‘Generous Loyalty’: The Vindication of a Forgotten Virtue.” Between talks, participants gathered with faculty, students, and Burke scholars to discuss shared historical interests. Belmont Abbey College President William Thierfelder opened the conference and kindly hosted a closing dinner. Video of the conference will be available soon.

For easy reference, we have listed some articles related to the Russell Kirk Centenary in other journals, podcasts, or sites in 2018 – 2019 below.

Gregg, Gary. “Revisiting the Foundations of Conservatism: The Writings of Russell Kirk.” The Epoch Times. November 29, 2018.

Sunde, Joseph.  “From ideology to imagination: How Russell Kirk brought me back to conservatism.” Acton Institute blog. October 10, 2018. 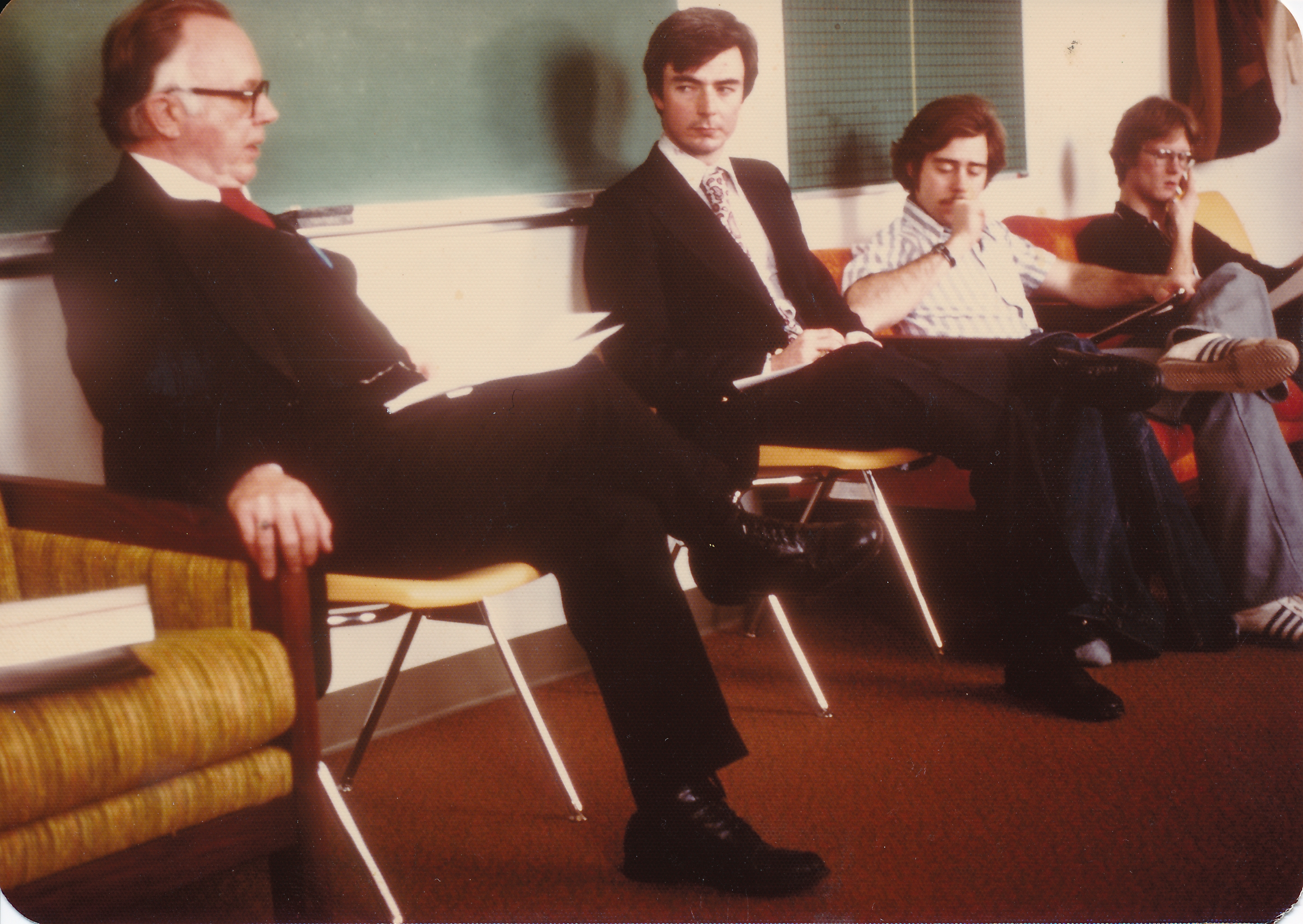 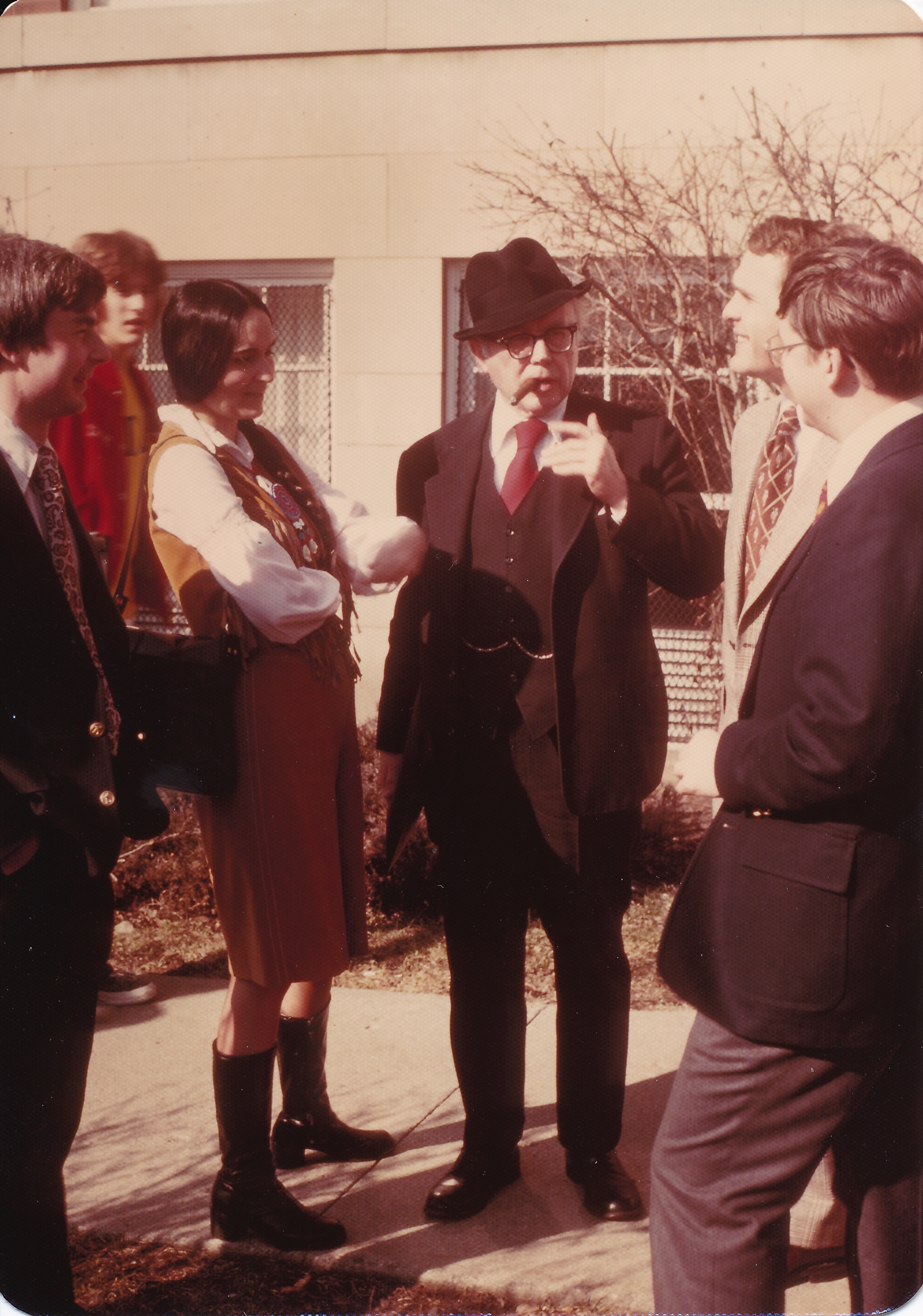 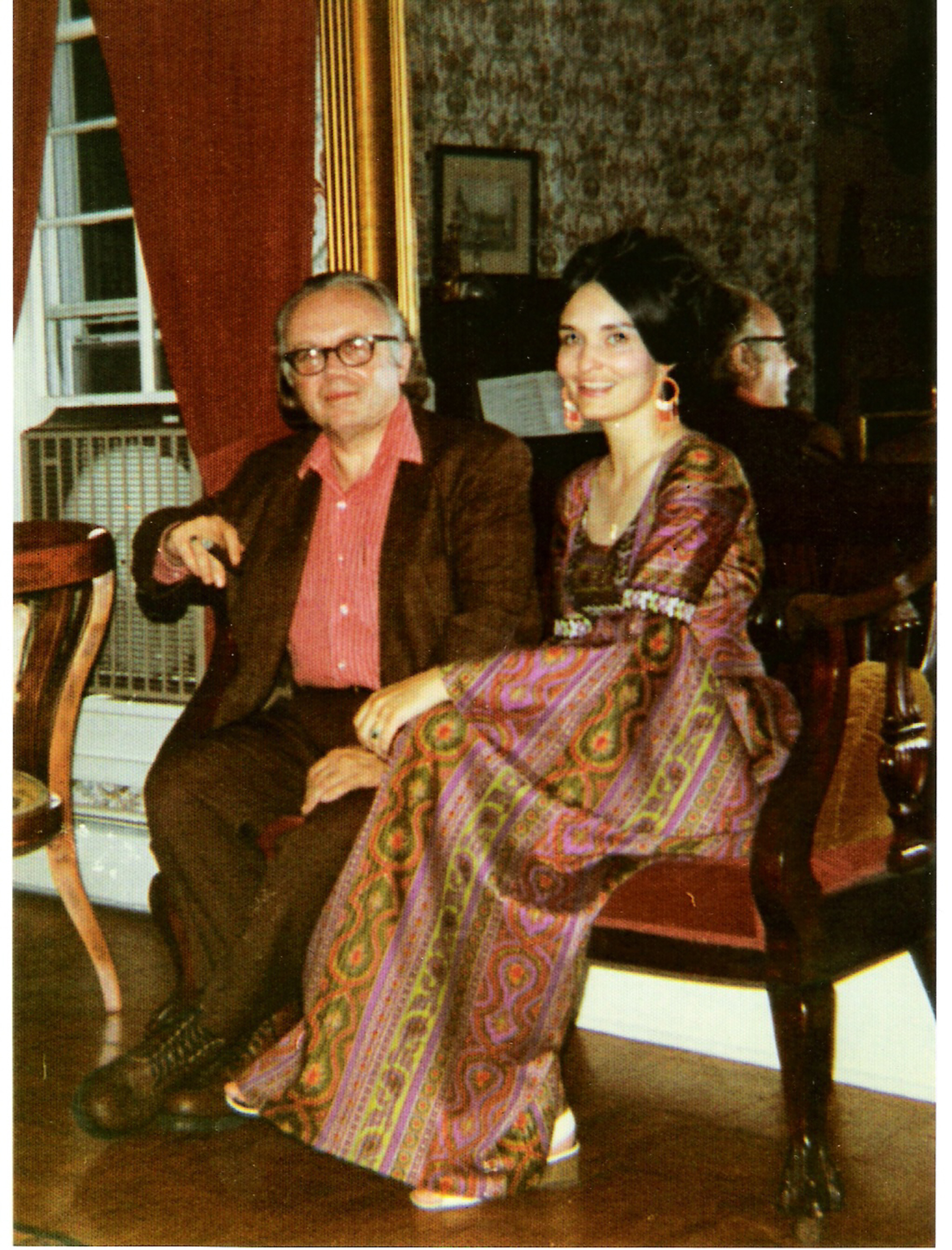 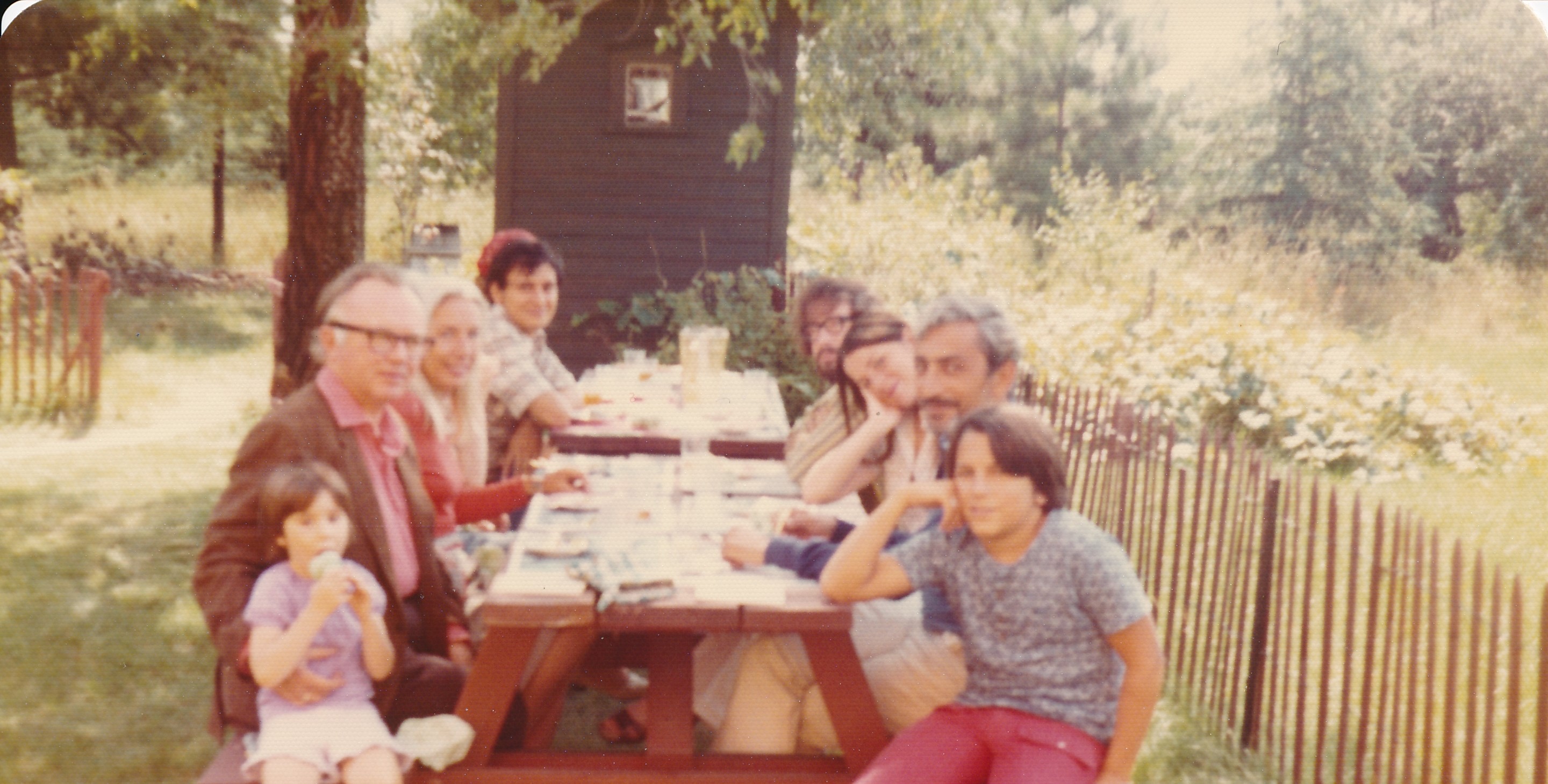 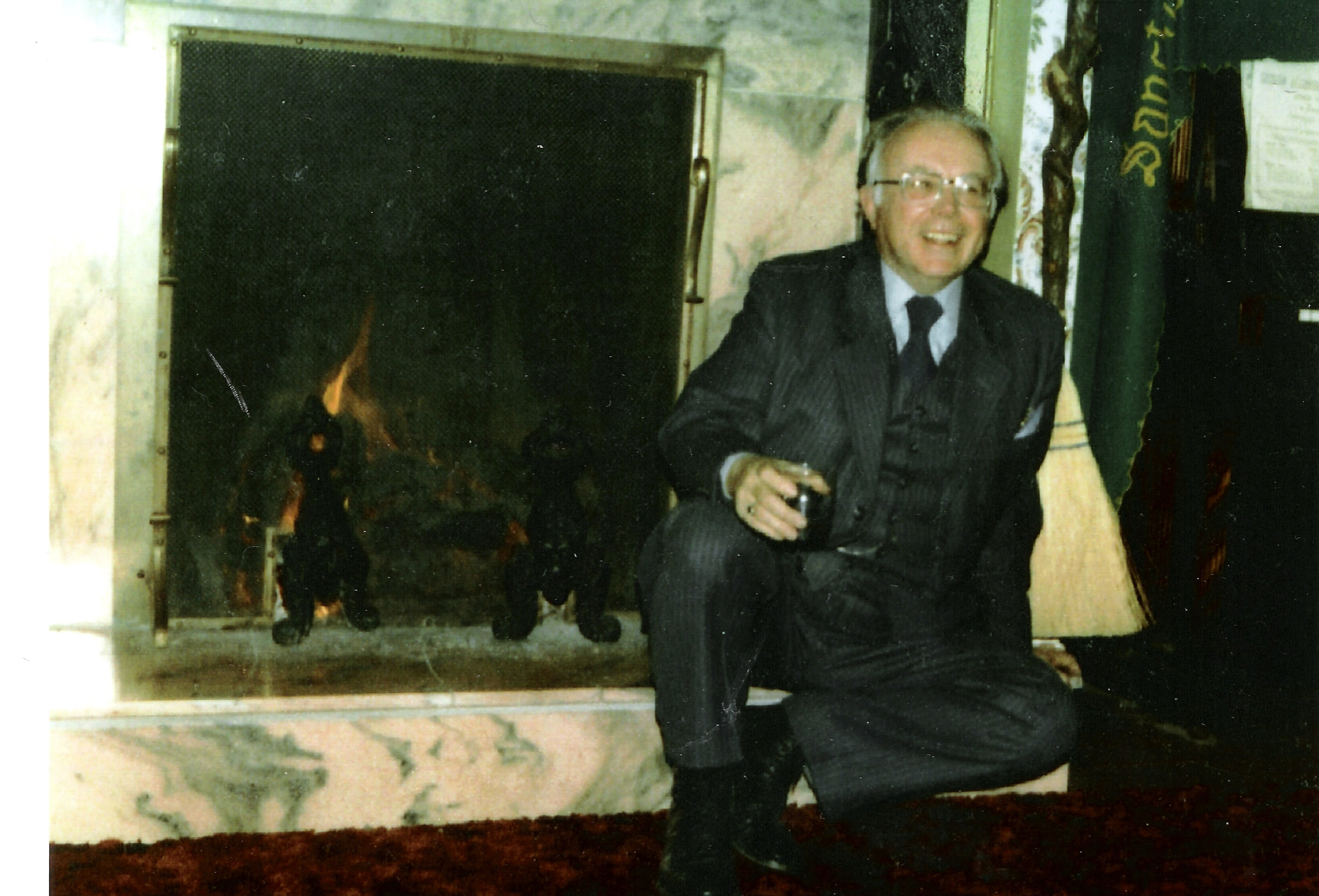 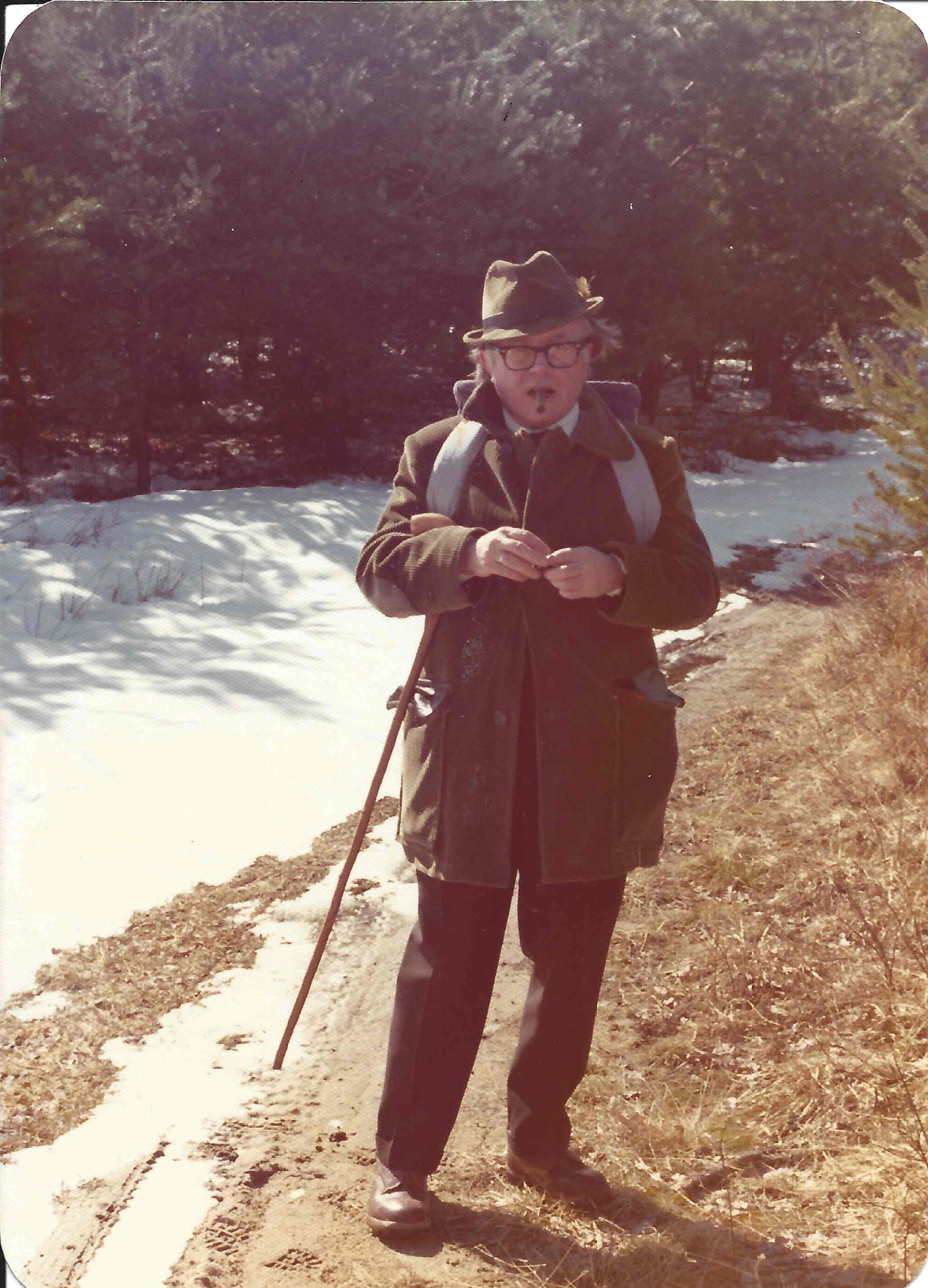 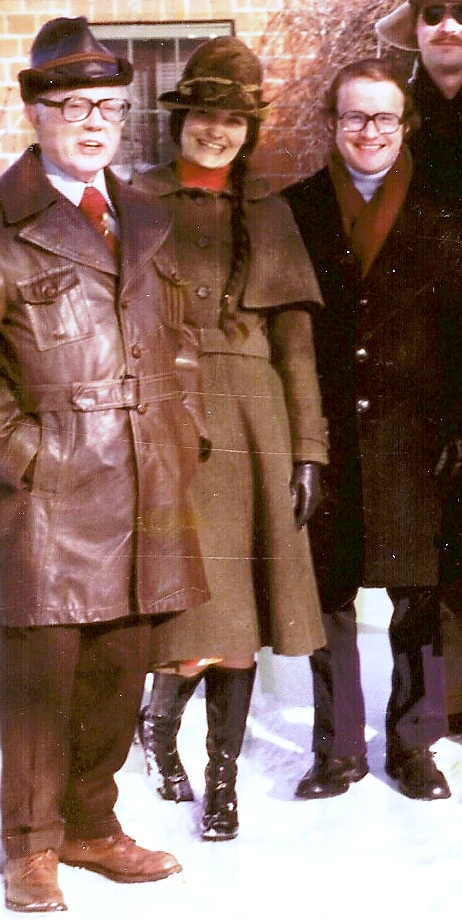 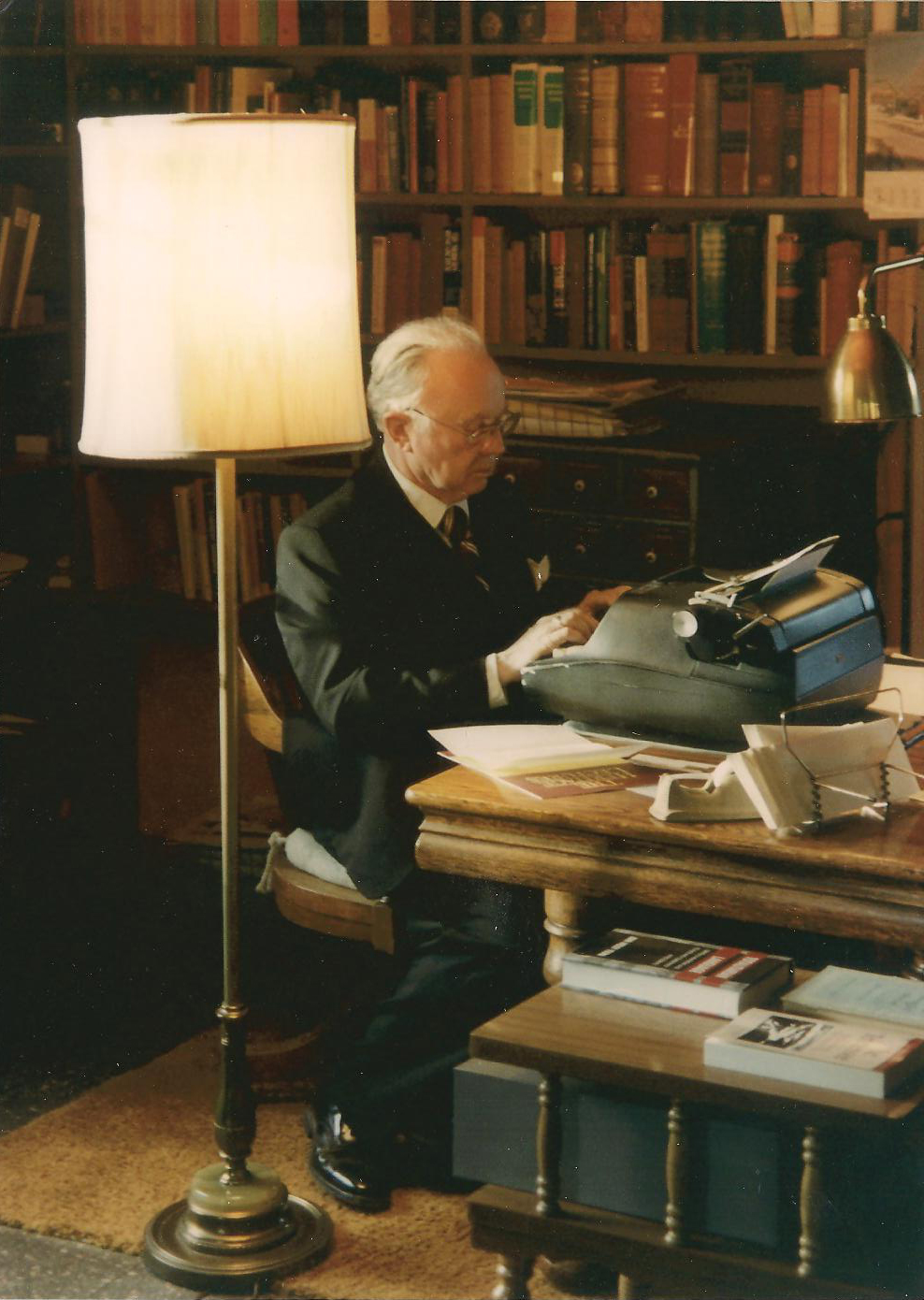 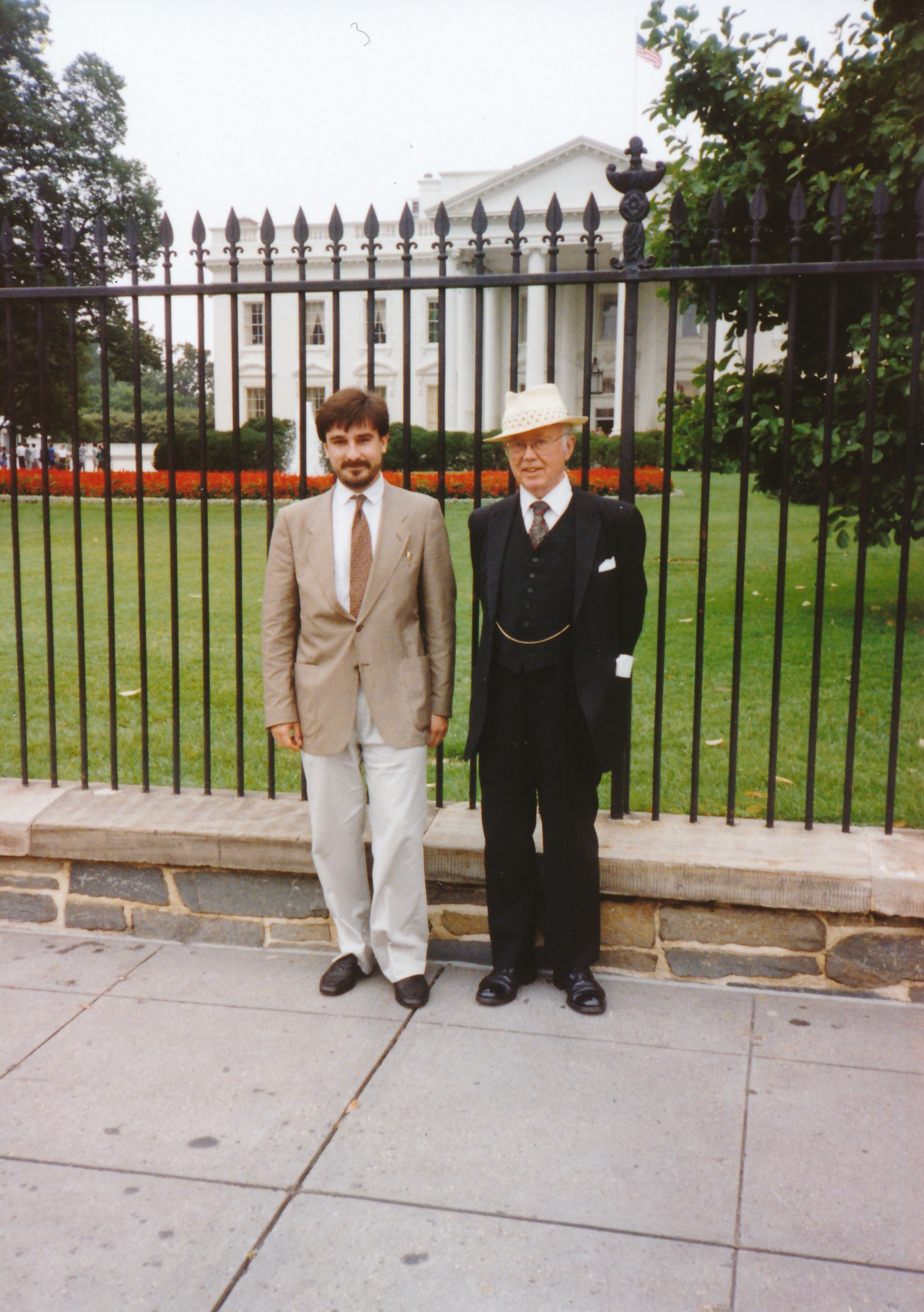 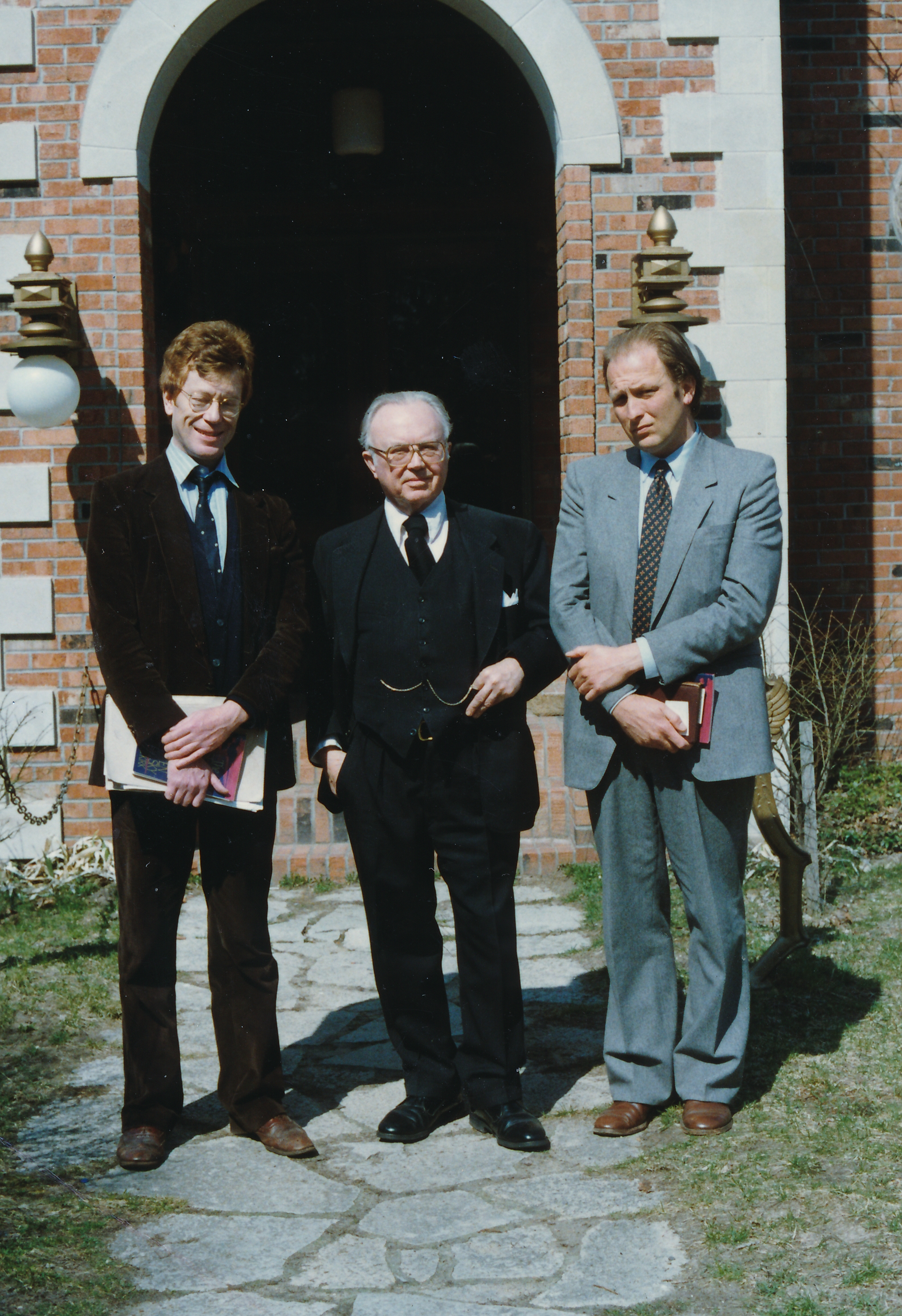 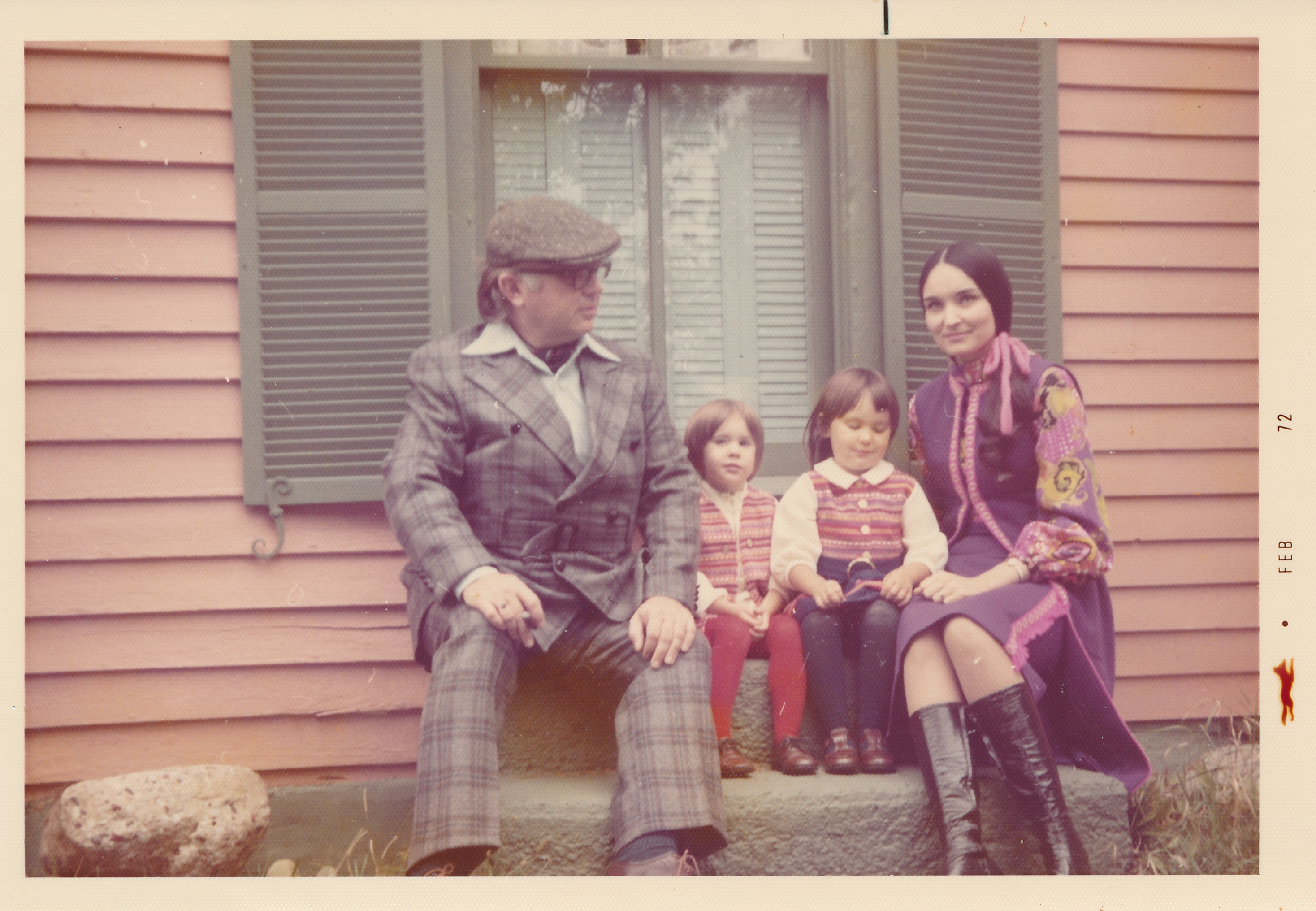 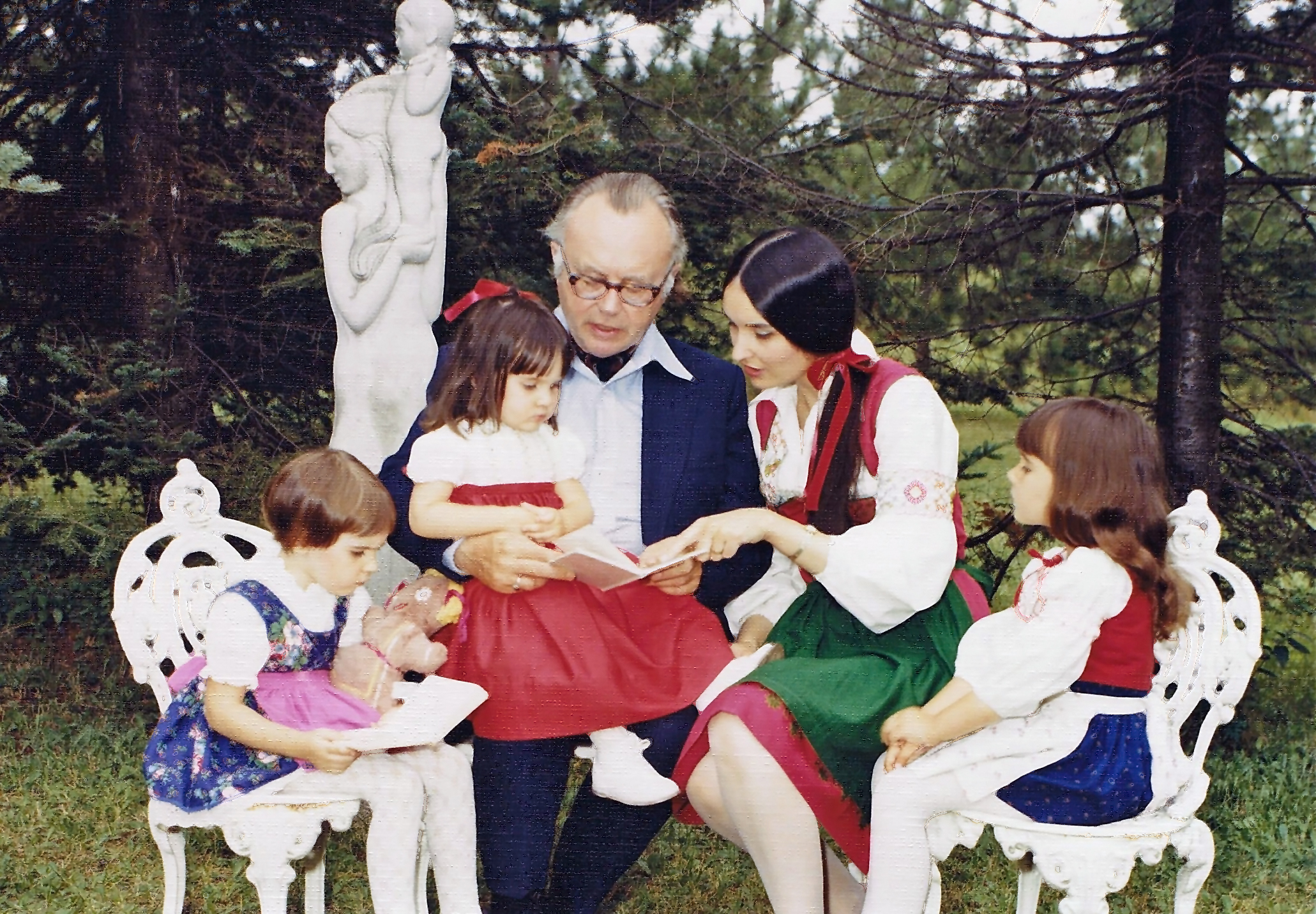 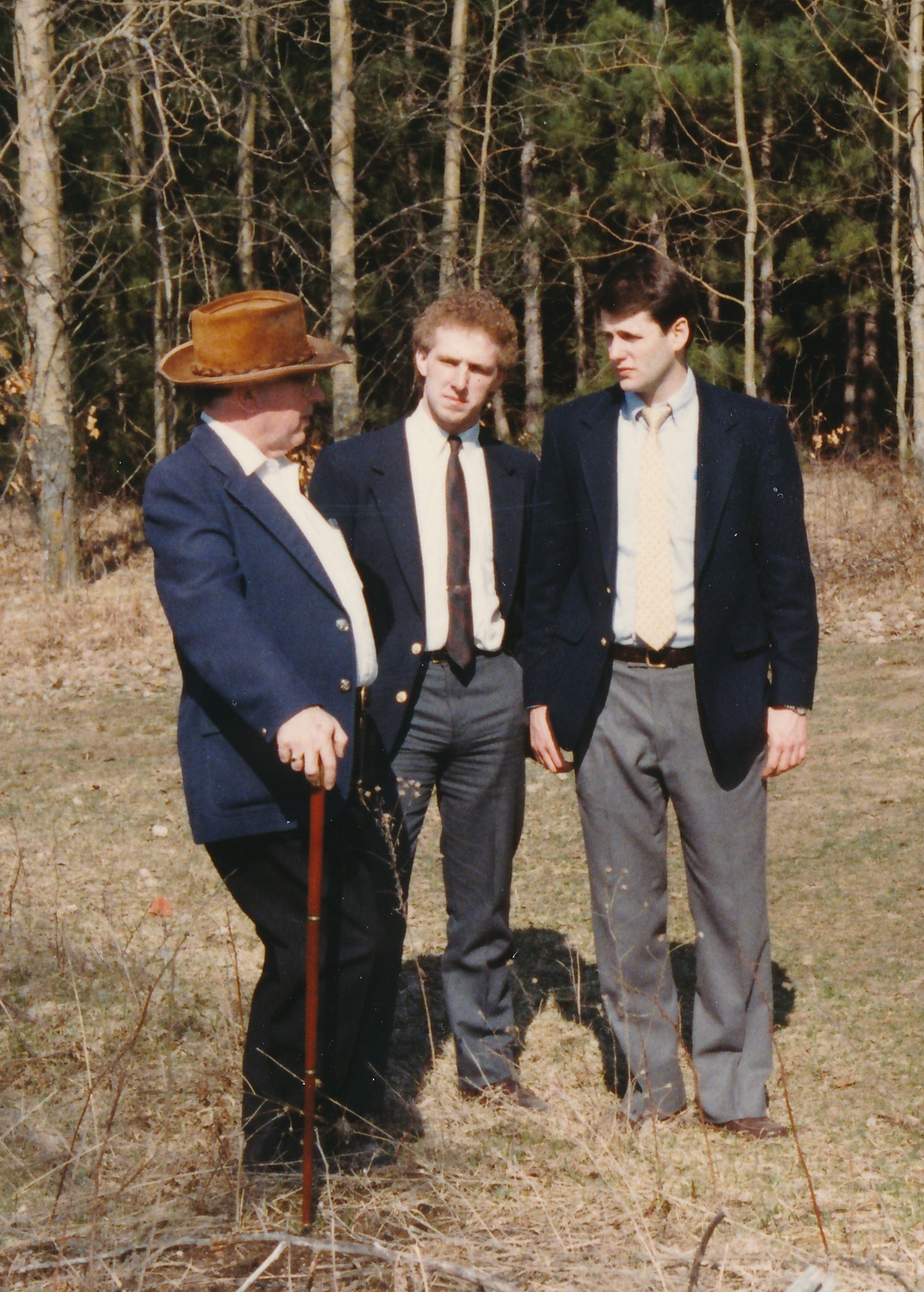 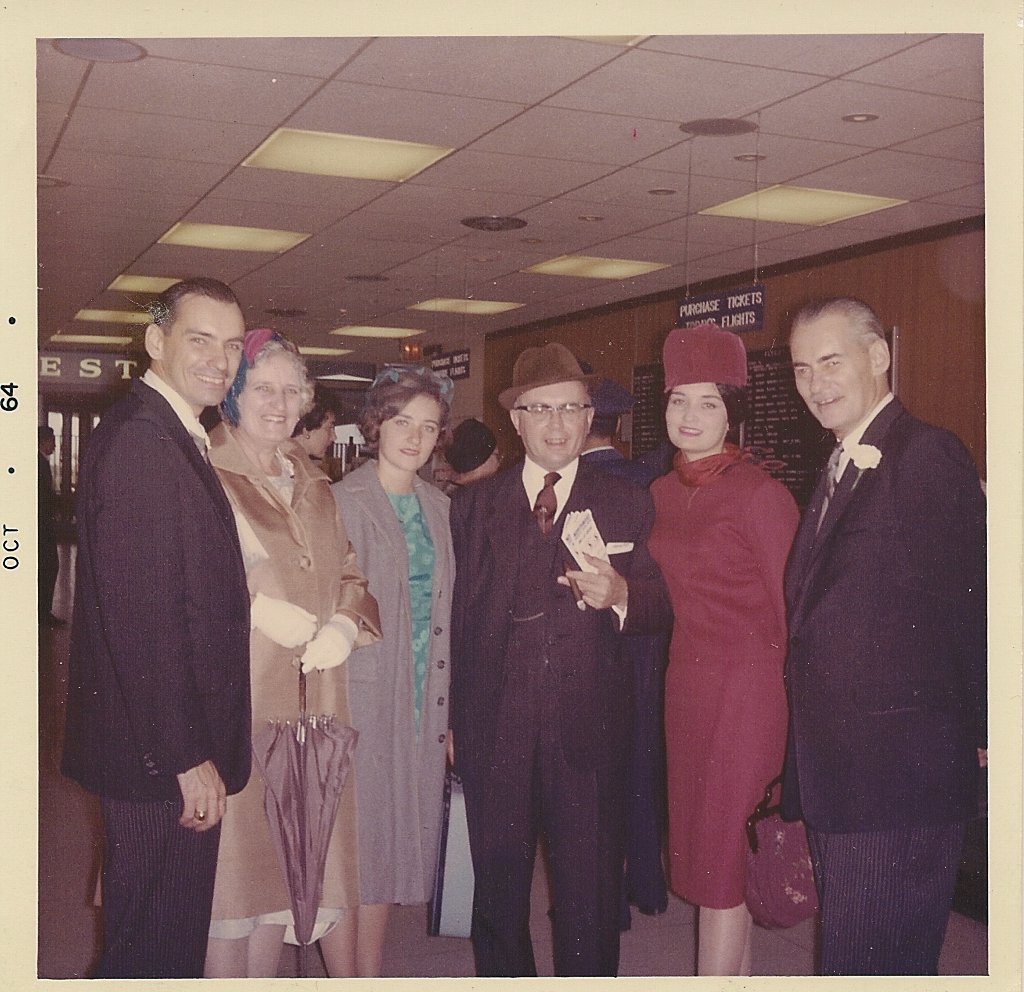 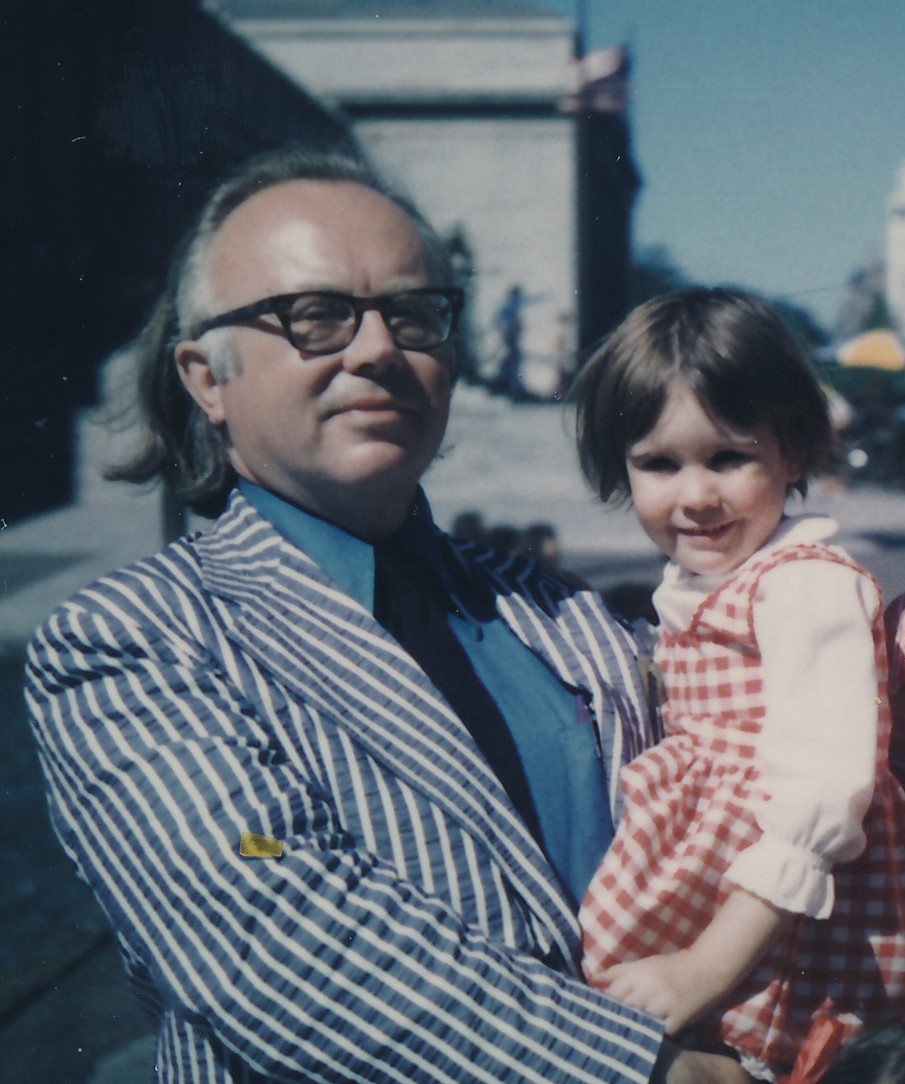