On Unity and Morale with Charles Martel 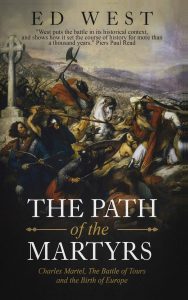 The Path of the Martyrs: Charles Martel, The Battle of Tours, and the Birth of Europe
by Ed West.
Sharpe Books, 2019.
Paperback and Kindle, 108 pages, $6.

In October of 732 a Muslim army composed mostly of light cavalry headed north to pillage and possibly set up winter quarters in the wealthy city of Tours. On the way they were met by a Frankish and allied force under Charles Martel. The resulting battle changed Western history, and now a new account sets the conflict in its context within the wider world of the eighth century.

Journalist and author Ed West (1215 and All That; My Kingdom for a Horse: The War of the Roses) has produced a wonderful, brief account of the battle, The Path of the Martyrs (the name coming from Muslim historians’ name for the battle).

West begins in media res, with the army of Abdul Rahman Al Ghafiqi (whom West calls Al-Rahman) coming across the Frankish and allied army in what is today the village of Moussais-la-Bataille, about halfway between Tours and Poitiers. Today, satellite views show a landscape of tilled fields, small copses of trees, scattered houses and farm buildings. Then the area was much more wild and woody, and Charles placed his army on higher ground, screened from the Muslim cavalry by trees and rocks.

With Charles’s army in the most advantageous position, the Muslims and Franks stood off for a week until Al-Rahman ordered attacks because he feared losing face if he turned back without offering battle. He ordered multiple cavalry charges at the Franks, who were mostly on foot. But the higher and rougher terrain did as Charles intended, preventing the cavalry from overwhelming his troops, and this at a time when it was unheard of for infantry to resist charging cavalry.

West quotes roughly contemporary chronicles comparing the Franks to a glacier: “The men of the north stood as motionless as a wall. They were like a belt of ice frozen together and not to be dissolved as they slew the Arabs with their swords.” Eventually Al-Rahman was killed. As night fell allied Aquitanians attacked to recover the booty the Muslims had already seized from Poitiers. Demoralized by their failure and the death of their commander, the Muslims left the battle to try to preserve their spoils, retreating back to Narbonne.

In addition to the account of the battle itself, West describes some of the events leading up to it—the rapid spread of Islam with Muslim conquests of Syria, Egypt, and Persia, the conquest of Visigothic Spain and the internal tensions in the Caliphate, as well as the weaknesses of the Byzantine and Persian Empires due to their own internal and external problems. In a time like our own marked by debates on the merits, or lack thereof, of nationalism and the importance of borders, one is struck by how often this history turned on unity or its absence. Until Muhammad united them under Islam, the Arabs were not seen as even a potential military threat. The Byzantines lost Egypt and Syria because Coptic and Syriac Christians preferred Umayyad toleration to Constantinople’s persecution.

West does err in describing the ancient view of pre-Islamic Arabia as “a godforsaken land where it never rained … productive of nothing to tempt the sophisticated merchants of the West, it had made no contribution to the West and seemed unlikely to ever do so.” In fact, several Arab ports and lands were included in the Periplus of the Erythrean Sea, such as Himyar and Saba (biblical Sheba), and the Romans called the Red Sea coast of Arabia “Arabia Felix” because, as the main source of frankincense and myrrh, for which they paid high prices, and remote from the troublesome parts of the Roman world, they figured it was prosperous and its people the happiest and most fortunate.

West also calls Charles’s army a part-time force, where other accounts credit the Franks with the first professional standing army in Gaul since the fall of Rome.

The real significance of Tours is not simply that Charles won a great battle, it was that his victory demonstrated that the Franks were capable of putting together a united front and fielding a well-trained, disciplined army. At Tours, according to West, Charles assembled an army of Franks, Burgundians, Alemanni, Thuringians, Lombards, Bavarians, and Aquitanians on the fly and welded them into an effective fighting force. In fact, one result of the battle was a Christian Spanish chronicler coining the term “European” to describe the people emerging from the mixture of Roman, Celtic, and Germanic cultures in Western Europe.

The Path of the Martyrs is a readable, accessible account that restores the importance of the Battle of Tours without romanticizing it or cutting it off from its broader historical background. This short and affordable book is a fine addition to collections on medieval history.