The Elon Musk of Botany Bay? 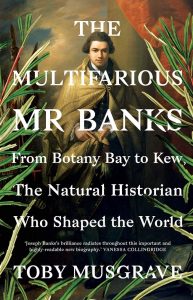 In current usage “multifarious” refers to a thing that demonstrates many characteristics dependent upon the aspect from which it is viewed. One must wonder, however, whether the author’s use of this term is intended to also echo the Latin origin of the word, an origin that refers to something being “in many places,” for in describing (indeed, the word cataloguing comes to mind) the life of Sir Joseph Banks (1743–1820), Toby Musgrave, a historian of horticulture and gardening, provides details not only of the many interests and talents of his subject, but of his travels, which included botanical surveys in Newfoundland and Labrador, in Iceland, and as the leader of a scientific team attached to James Cook’s first circumnavigation (1768–1771). A wealth of detail is presented, and if the book has a principal weakness it lies in the fact that the first half records the events of Banks’s life in an essentially chronological narrative. It is only after completing his account of Banks’s participation in Cook’s mission, and of his surveys in Iceland, that Musgrave shifts to a more thematic treatment of the principal projects and interests of his protagonist.

There can be little doubt that Banks was a remarkable man. Despite a formal education that would in a meritocratic society have prevented him from advancement, his natural abilities and curiosity—combined with great wealth, the right connections, a personality that could be both engaging and display the egocentricity of one who is assured of his own rightness and right—allowed Banks to ascend to become a close adviser to George III, the President of the Royal Society, a key figure in important commissions focused on imperial policy, and even “the father of Australia”—the latter sobriquet arising from his dogged insistence upon the foundation of a colony at Botany Bay, and his later efforts to promote the establishment of a wool industry in New South Wales. As portrayed by Musgrave, Banks can also be seen to resemble a sort of Elon Musk-type character, so assured of his own foresight as to often flirt with alienating people because he assumes that if they disagree with him they must be, in fact, wrong.

The problem with any portrayal of a man like Banks lies in the question a reader must ask of any biography. “Why should I care?” The answer must lie in two factors: (1) What unique insights into the thinking and personality of the protagonist are provided?, and (2) What has been the effect of the person’s life on the course of history and thinking? Musgrave only really finds his footing with respect to the second question, and then only once he has switched to thematic approach in describing Banks’s life after the Cook voyage. The weakness of the book lies in the fact that question 1 is so little considered.

Banks was the collector and cataloguer of many thousands of plant species, and he commissioned plant hunters who scoured the world. One of his principal legacies is the Royal Botanic Gardens, Kew. As such, he is a very important figure in the field of botany and horticulture, but the author seems to think that this is enough to interest the non-specialist reader, and the result is a book that often reads more as a hagiography than as a biography that explores the why’s of Banks’s passions. Musgrave may even, in fact, admit to a certain lack of exploration of motives when he writes at the very end of his book, “Banks is also a paradigm of the hypothesis that the advancement of science requires not only minds of genius to make breakthrough discoveries, but also those, like him, with the vision to recognize where advances would be advantageous …” In other words, we are given a review of the accomplishments of a man with the acumen to recognize and seize the main chance, and the personal drive to persist in what would in business be recognized as the entrepreneurship to grow an idea into an establishment.

For anyone with an interest in the history of botany and horticulture, this book will prove rewarding. For those with an interest in early exploration, and of the cultural changes in eighteenth-century Great Britain that allowed an ascendant maritime power to broker her maritime advantages into empire and trade, there will also be details of interest. But for the reader who wants to get inside the subject’s head, to understand the real drives of a man who accomplished so much, the book—despite evidence of the author having conducted an extensive review of his subject’s journals—will disappoint. Perhaps this is no fault of the author, for the journals themselves evince a dry, objective style that appears to have been designed to not provide insight into motives or misgivings, and, indeed, the rare examples of strictly personal behavior—for example with respect to a presumed mistress dispatched to rendezvous with Banks—evince a certain egocentricity that is not reflective at all. Making Banks’s accomplishments interesting could prove to be rewarding on a more narrowly focused scale. Making the man interesting has proven to be an exercise in “specimen-preservation” that the available evidence has made very difficult.

The Rev. Dr. Karl C. Schaffenburg is a retired Episcopal priest serving in parish ministry in Mississippi, having previously served in legal, policy and intelligence roles in the pharmaceutical industry in the United States and Europe. Fr. Schaffenburg has previously authored reviews and policy analyses in Russian and Irish political culture, philosophy, history and cultural criticism. His education is in law and theology.