“Why are you posting pics of walls all the time? Shouldn’t we rather … you know, build bridges?” a fellow Tweeter ironically suggested after I posted the umpteenth snapshot of my walk along the Aurelian Wall in Rome last summer. That made me think for a while. Should the Hungarian Ambassador (of all people) be fixated on the topic of walls in a time where they are seen not as something positive, but rather as an obstacle for free movement in today’s Europe? But then I happened to walk by the cannonball from the 1870 siege of Rome embedded in the Aurelian Wall and I just had to stare and take a photograph and post it.

Because it is simply too cool.

How did my love for old walls begin? It’s quite simple. When we moved into the Embassy of Hungary to the Holy See I only had to take one look out of my window to fall in love. There it was, half covered by acacia trees, but always present—the Castro Pretorio corner of the Aurelian Wall. 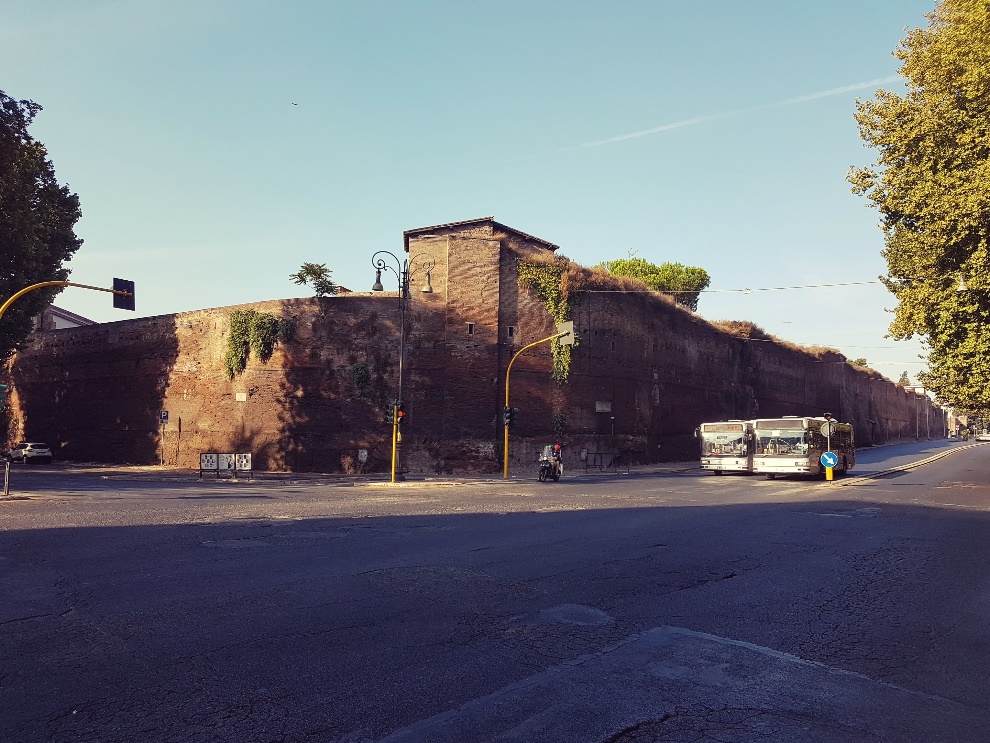 This is when we became friends. At about the same time, the friendship of the wall with me began. While making my morning run along the wall, I found a red brick lying on the pavement in front of me. It had obviously dropped out of somewhere in the seven meters of wall above me. As it was impossible to put it back in place I took it with me. It has been on my desk ever since.

You look at it. You walk along it several times per week, in baking heat and torrential rain. Touch the red bricks that were put there in 270 AD. Yes, that’s 270.

You learn about the history: for nearly six hundred years Rome never needed a wall, as her “walls” were her provinces. Suddenly, there was the danger of an attack by the Goths so the emperor went ahead and built the wall (“because the Romans wanted no mutual cultural enrichment with the Goths,” quipped one cheeky Twitter buddy). Standing before the wall on the slim sidewalk along the Viale del Policlinico, you crane your neck and marvel at its dwarfing seven-meter height. How must it have felt to a barbarian in Alaric’s Visigoth army camping under these walls in 410? Alaric encamped near today’s Piazza Fiume, according to tradition, four hundred meters from here. And then he went ahead and took the town anyway. It seems some inside helper opened the gates. The world resounded with the echo of the shock that Rome was sacked.

Finally, to get to know my new friend, I set out for a walk along the walls that still circle a great part of modern Rome. There are no remains on the western bank of the Tiber, but on the eastern side you can walk the length in a long lazy afternoon. Beginning at Porta Pinciana, just beside Villa Borghese, if you start walking clockwise you will always find the wall. It runs—sometimes incorporated into buildings, sometimes interrupted for a few hundred meters but clearly visible—past Castro Pretorio, behind Termini Station, Porta Maggiore, and San Giovanni Laterano and so on until the familiar wall dwindles just behind the Pyramid of Cestio and the Protestant cemetery. 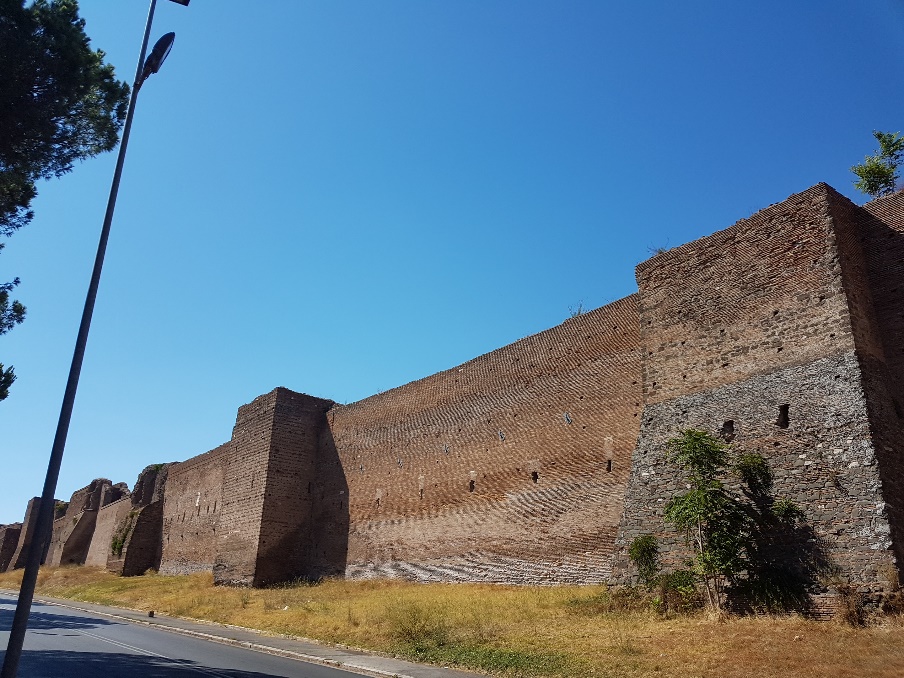 You can walk on the outside but also discover the inside of the wall. Over some stretches it disappears, but in other places it looks absolutely spectacular, out of a sword-and-sandal movie of the sixties. The greatest thing is that most people don’t know about this Roman attraction, so walking along the wall gives you the additional pride of knowing something very special.

On the hike you encounter the most incredible details if you know where to look for them—a hidden “museum of the wall,” cannonballs embedded into the bricks, even an outdoor toilet at Piazza Fiume and gaping holes from Italian cannons during the siege when the Italian nationalists took Rome and made it the capital. It’s crazy that the first time the wall was taken in a real siege was with modern instruments of war in 1870, sixteen hundred years after it was built. 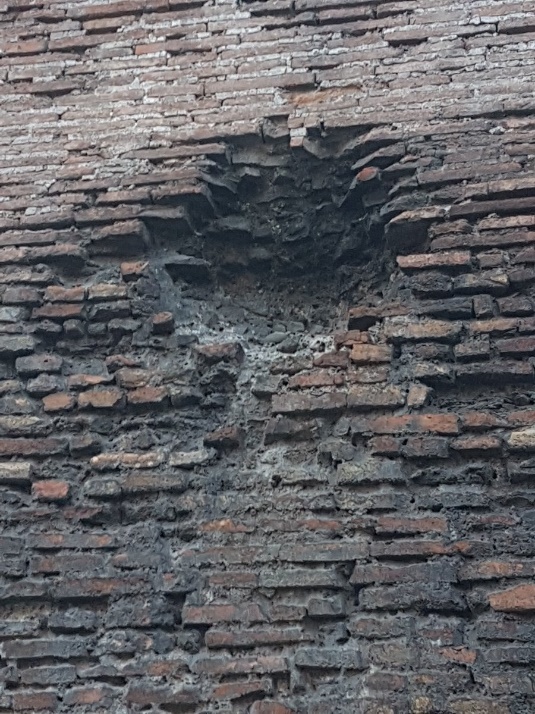 And, tweeting happily with the most beautiful vistas (of which, as I found out, most people are unaware), I discovered a whole community out there on Twitter that is fascinated—no, aroused—by old walls. The older, the gnarlier, the better. From Hadrian’s Wall in England to excavations in the Holy land, from guides who are “normal people” to archaeologists like Dr. Sophie Hay (@pompei79, credited with inventing the hashtag #wallporn)—there’s always somebody who would point a camera at a particularly crooked old piece of wall, slap a hashtag to it and—hey presto—it was retweeted and commented upon from literally all over the world. I absolutely refuse to use that word “porn” but have created monikers like #wallsplatter (for a gutted piece of wall), #wallfetish (for a piece of bricked wall incorporating an Ionic pillar), #wallophile, and other playful names.

From Aurelian’s construction I began to discover other old walls. They should have a certain age to become interesting. No nineteenth-century building touches my heart; you need to go back before the middle ages to begin to get me stirring. But give me an opus reticolatum from Roman antiquity, or the cyclopean stones in the older Roman city wall, the Servian from the fifth century before Christ, and you get my blood pumping. You can see those near the McDonalds at the Termini Train Station, by the way. These are my parameters but others prefer other walls. Variatio delectat.

Finally I began asking for the why. Why does staring at pieces of old wall make people everywhere happy? What have ancient walls to tell us?

The Aurelian Wall is something that shouldn’t be there any more in the twenty-first century, something that, like the Church (or, come to think of it, the Habsburg family) looms into our time from a dark and distant past, but is still there. Undisturbed by the loud and stinking traffic that rushes by, day in and day out; undisturbed by changes of borders, governments, monarchies, and wars. We tend to root for the little guy, and also for the little engine that could, and that stayed on much longer than it should.

Technically, there is no reason that a wall from AD 270 should have survived the entire history of the Christian West. But here it is, standing unobserved by thousands of Romans, most blissfully ignorant that in a very few years their own bodies will crumble to dust while the Aurelian Wall will still be standing, and happily so, thank you very much.

Part of the attraction is, of course, the “I see something you don’t see” game. Most other people in fact do not see what you see. Thousands of people walk by these walls every day, but if they just stopped and looked at them they could learn incredible stories from the history of mankind. In a way we share a little secret with the wall. 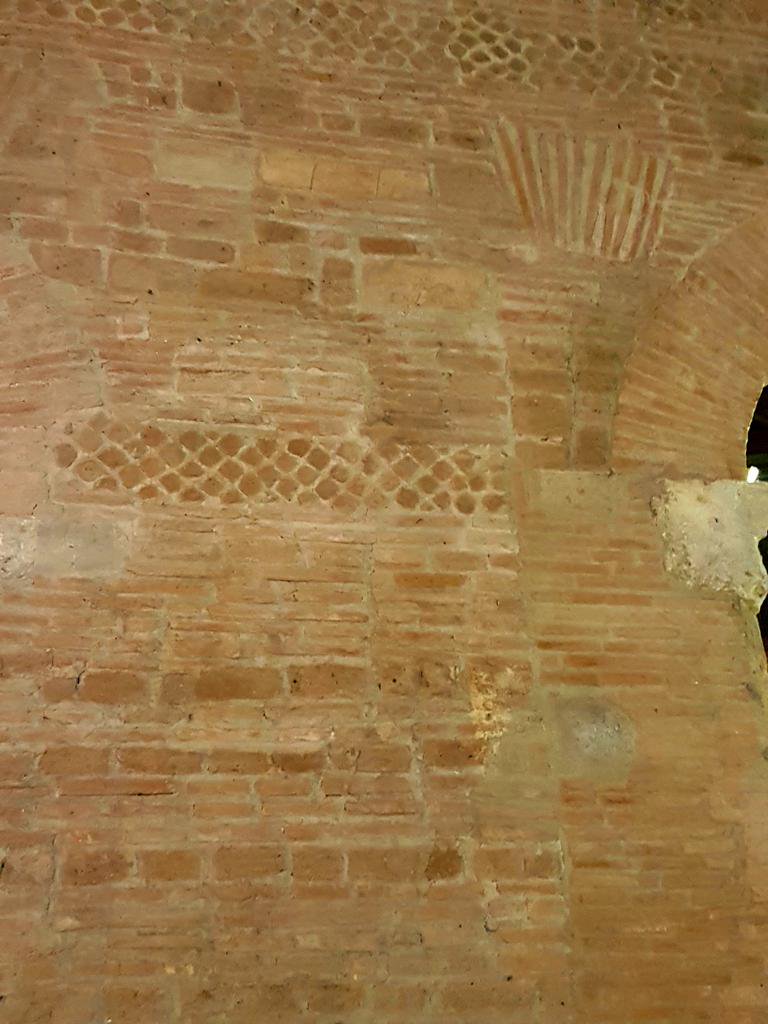 If you care for walls you will notice that they often reuse elements. In this picture, for example, you have a jumble of opus latericium, opus reticulatum, opus vittatum mixtum, and more. Such a wall with mixed elements tells us of our shared human way to build things on top of, or incorporating, earlier things. In a way this roots us in history and confirms the continuity of humankind. In front of a wall you can wax philosophical. 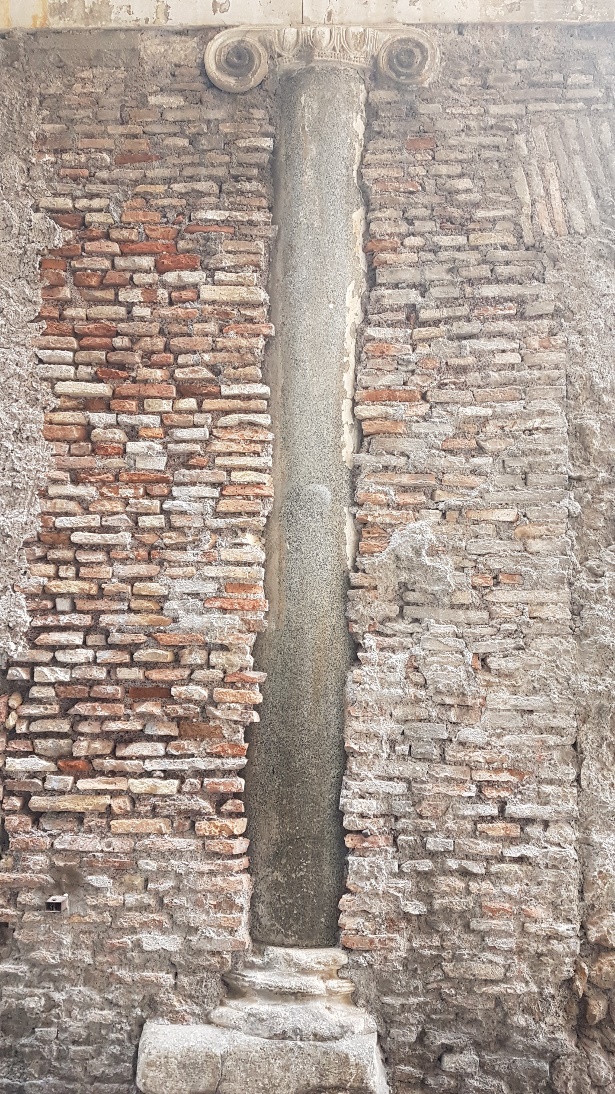 Then there’s the aesthetic side, as I found out when I took snapshots of a church wall in Umbria with mixed elements, or this column embedded into a brick wall somewhere in the center of Rome. The comments simply poured in. Many people were simply blown away by its sheer visual beauty.

And there’s the purely sensual part, too. In our high-tech time where everything seems to exist only behind the glass screen you swipe across, the rugged arrogance of such edifices seem to invite us to touch them, to realize that there were times before our own, walls that speak of wars, but also directly to our gut feeling. 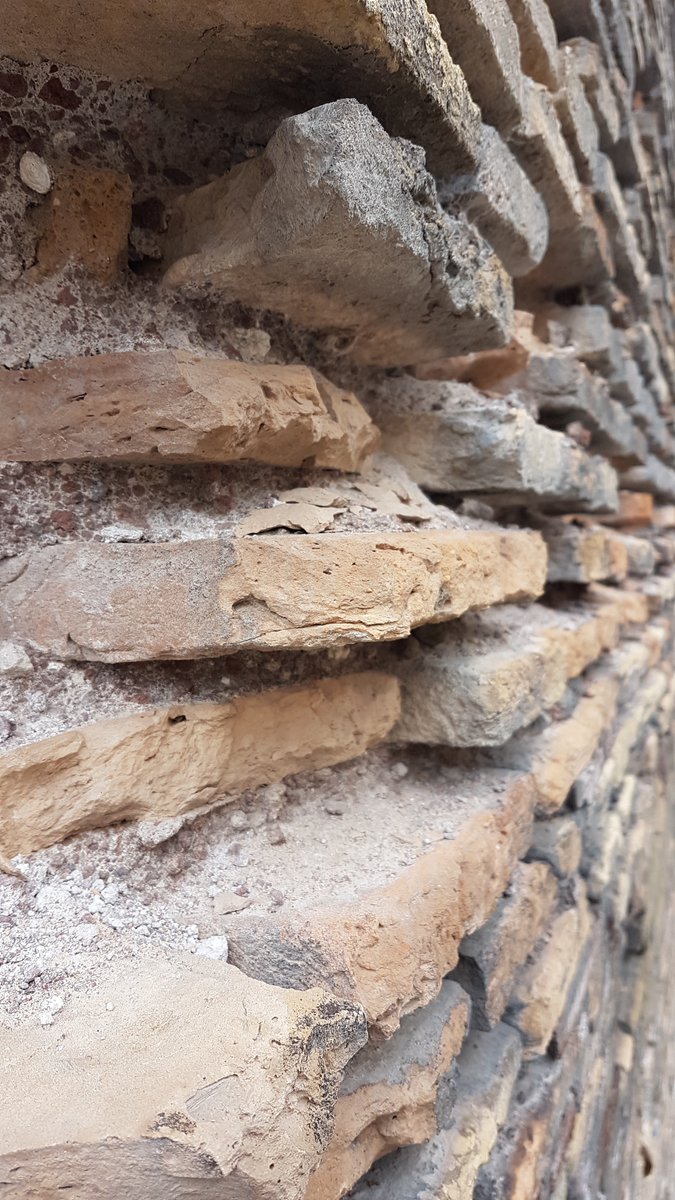 Although walls nowadays seem to have a negative connotation we might, in our collective unconscious, not have forgotten completely that they also give us security in times of cold, wind, and war, that even the Lord himself in the Bible tells us so: “I will protect and defend you like a wall” (Isaiah 60:18 GNT).

So why am I telling you all of this? Why, of course to encourage you to join the wall-loving community, to keep your eyes open when you walk through the streets of your town—even if it isn’t one that dates back to 753 BC. Other people experience endless joy and bore their friends with posting pics of puppies or (God help us) cats. Why shouldn’t we plaster the Internet with pictures of walls?

That way, you can help all those forgotten pieces of architecture from history to speak to the eyes and the hearts of man today.

“Thus have I, Wall, my part dischargèd so.
And, being done, thus Wall away doth go.”