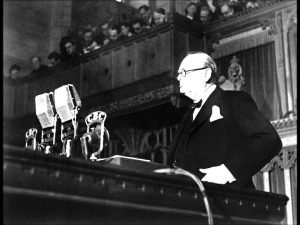 Winston Churchill was the greatest orator of the twentieth century. His most famous speeches rank with those of giants like Lincoln and Martin Luther King. A master of rhetoric with a gift for the memorable phrase, six of his speeches were transformative in that they changed the way the public came to view the events he spoke about. All six speeches were connected in one way or another with World War II, the event that finally brought him to power and fashioned our lasting image of him. They also were examples of the crisp prose Churchill had mastered as a young man: short words with English roots.

His first memorable oration was made on the eve of the war, his savage denunciation of British appeasement at the Munich Conference in October 1938 in which the British government traded Czech territory for a guarantee of peace from Hitler. Churchill predicted that instead of peace England would get war. Two of his other speeches, both delivered in 1946, launched two of the most important political-ideological movements of the second half of the twentieth century. His Iron Curtain speech, delivered in the small town of Fulton in Missouri, dramatically awakened the West to the threat of Communist aggression while providing a perfect image of Russian totalitarianism. Later that year speaking in Zurich, he called for a partnership between the two enemies, France and Germany, and played a major role in promoting the idea of a United Europe.

His four most famous speeches were delivered eighty years ago during the dangerous summer of 1940, between May and August—when England’s fate hung in the balance. They were crucial in strengthening British resolve to continue the fight after the collapse of France as well as cementing Churchill’s position in the House of Commons and the nation as the voice of the people. They were a catharsis for the British public deluged by bad news in the opening stages of the war.

Churchill became Prime Minister on May 10, the day that Germany launched its great Blitzkrieg in the West. In less than three weeks, Holland and Belgium surrendered while the Germans had broken through French defensive lines, bypassing the famous Maginot Line.

The situation Churchill confronted was unprecedented. Moreover, he was unpopular among his fellow Conservatives for having toppled the former Prime Minister, Neville Chamberlain. Three days after taking office, on May 13, Churchill gave the first of the great orations of that spring and summer. It was short, just seven minutes, and set the tone for Britain’s view of itself and its role in the war. Admitting that the war had begun badly, Churchill introduced the phrase now most associated with the speech, telling the House and the people that he had nothing to offer them but “blood, toil, tears, and sweat.”

There is controversy about the origins of the phrase. Some claim that Churchill borrowed it from the Italian nationalist, Garibaldi. Others think he cribbed it from a remark by Clemenceau, the French Premier, during France’s darkest days in World War I. Interestingly two months before Churchill’s speech, George Orwell wrote a review of Hitler’s Mein Kampf in which he argued that part of Hitler’s success was his promise to fight for Germany’s destiny. “I offer you struggle, danger, and death,” Hitler wrote, and Orwell noted that “a whole nation flings itself at his feet.”

Churchill’s May 13th speech initially was not a success although in time the memorable phrase caught the public’s imagination. One of Chamberlain’s greatest admirers called it “a brilliant little speech.” Churchill’s own reaction was more succinct: “That got the sods, didn’t it?”

Churchill’s second great speech that summer came on June 4th as the British managed to withdraw 330,000 troops from Dunkirk under the very noses of the advancing German forces. The setting was grim. France looked beaten, the best of British equipment, tanks, guns, trucks lay rotting in France and an invasion was expected at any time. Churchill did not pass over the bad news.

Regarding the celebration of the so-called “Miracle of Dunkirk,” he noted that “Wars are not won by evacuations.” Churchill sketched out how serious was the situation facing Britain. Her allies defeated, or in the case of France, on the brink of surrender, Britain must expect the worst. His peroration preached sheer defiance and his latest biographer Andrew Roberts believes it ranks with Pericles or Lincoln’s greatest speeches. “We shall go on to the end, we shall fight in France, we shall fight on the seas and oceans … we shall defend our Island, whatever the cost may be … we shall never surrender …” The use of “we” was designed to make it clear that it wasn’t Churchill who would do these things, but all Britons. Harold Nicolson called it “the finest speech I have ever heard.”

It should be noted that the speech came after Churchill had successfully fought a suggestion in the Cabinet to have the Italians act as mediators and approach the Germans about peace terms. There was considerable support in the Cabinet, led by the Foreign Minister, Lord Halifax, to ask for terms. Churchill believed such an approach while Britain had no success on the battlefield was a sign of weakness that would end with eventual domination by Germany.

The third, and in my estimation the best, of the four speeches that summer of 1940 came on the anniversary of the Battle of Waterloo, June 18th. (It was also the day when the heretofore obscure French general Charles de Gaulle broadcast his message to France that the country had lost a battle but not the war.) The situation had only grown grimmer for Britain. Paris had been occupied by the Germans and the French government, now dominated by such defeatists as Marshall Pétain, was expected to sue for peace. Churchill supported a desperate plan hatched by Jean Monnet, later the father of the United Europe movement, and the pro-French Foreign Office diplomat, Sir Robert Vansittart, to form an indissoluble union between the two nations. It was hoped that this would strengthen the hands of Premier Paul Reynaud and convince the French to carry on the battle from a base in North Africa. It was to no avail. The French were ready to drop Reynaud and turn power over to those who wanted to get out of the war.

The situation was further made dangerous for Britain when Italy entered the war on June 10th, thus threatening the British position in the Mediterranean. Despite his pleas to President Roosevelt, Churchill saw no hope for American aid at this point. The President had told him that American public opinion remained steadfastly isolationist.

Churchill’s problem was to reverse the sense of gloom and defeatism at this stage in the war. He had preached defiance in the past but in the June 18th speech he shifted to an appeal to English patriotism, although despite the anniversary he did not mention the Battle of Waterloo.

There had been no victories to celebrate, he said, just defeats and withdrawals. Britain must face the worst. After a survey of the situation, he ended on perhaps the greatest peroration of any speech of the twentieth century.

“The Battle of France is over,” he said, and “the Battle of Britain is about to begin.” Appealing to the people’s sheer love of country, he outlined what lay before them:

Hitler knows that he will have to break us in this Island or lose the war. If we can stand up to him, all Europe may be free, and the life of the world may move forward into the broad, sunlit uplands. But if we fail, then he whole world, including the United States, including all that we have known and cared for, will sink into he abyss of a new Dark Age made more sinister, and perhaps, more protracted, by the lights of perverted science. Let us therefore brace ourselves to our duties, and so bear ourselves that, if the British Empire and its Commonwealth last for a thousand years, men will say, “This was their finest hour.”

His secretary, Jock Colville, thought the speech inferior to his June 4th oration, but some of the negative commentary was the result not of the speech in the House of Commons as much as a version he gave that evening on the radio. He spoke with a cigar in his mouth and rushed through the speech. Colville said he sounded like a tired bishop. The newspaper publisher Cecil King said he sounded drunk.

Churchill thought enough of the speech to use the last phase as the title for volume two of his war memoirs.

Churchill’s last great speech of that memorable summer came on August 20th, while the Battle of Britain was raging. Beginning in July the Germans had been staging air attacks on Britain, especially on shipping in the English Channel. In the second week of August they launched a sustained attack designed to provide air supremacy over the English Channel for a successful landing. We know now that Hitler was not committed to an invasion. He preferred a peace treaty because he was already thinking about an attack on the Soviet Union.

By August 20th it was clear that the Royal Air Force was holding its own. Churchill used the opportunity for another overview of the war and as a way to pay homage to Britain’s newest heroes, the RAF pilots. The best line of the speech is a phrase Churchill had been toying with for some time. Referring to the success of the RAF, he said that “Never in the field of human conflict was so much owed by so many to so few.” The RAF pilots have since been known as “The Few.”

The speech was less dramatic than his earlier ones. In a discussion of the forthcoming “destroyers-for-bases” deal with the United States, which Churchill believed an important step in overcoming American neutrality, he compared Anglo-American friendship to the mighty Mississippi. Let it roll on. Nothing can stop it. Colville writes that on his way back to 10 Downing Street, Churchill sang “Ole Man River.”

What was the value of these four speeches and especially their perorations? For one they seized the attention of people in the United States with their dramatic imagery and powerful language. Key phrases quickly passed into history. They also were successful in dramatizing the war for the British public; it seemed that Churchill was taking them into his confidence, making them a vital part of the war effort.

By the end of the summer the bombing of Britain was starting to take a fearful toll. Churchill made it a point to visit bombed sites, and remained popular. “Good old Winnie,” people would say when they saw him poking around the ruins. Those four speeches in the summer of 1940 not only began the legend of Churchill but played a real part in the British war effort.