On the Rebuilding of Notre-Dame 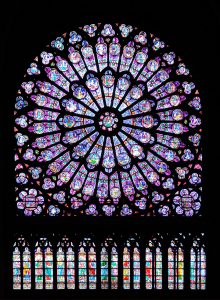 The fire that burned in the very heart of Paris has now for a fortnight been put out. Each night the city’s great cathedral stands in the darkness, roofless but defiant, to greet—as it has at least three hundred thousand times—another dawn. Each day the great rose windows, preserved beyond all hope, glow still in their sempiternal beauty. What happens now?

A few, themselves burning with the inner fire of the ressentiment that animates the spurious sophistication of the chattering classes, were all too pleased to contemplate the possible destruction of a supreme expression of objective excellence against which they might feel themselves to be measured. They looked to the fire to advance their freedom, and may even regret that the building did not burn altogether to the ground, to accomplish a more complete liberation. Even among those who desire a rebuilding, some appear to hope for a cathedral reconstructed in such a way as to reflect not the worldview of those who first built it but rather the mood and aspirations of the present age.

Nevertheless there are many of good will and sense who have already called for a restoration in continuity with the historic character of this marvelous and well-loved edifice, and in harmony with the vision that guided its initial construction. Furthermore, some in a position to do so have already, and very generously, pledged great sums to this end. Surely it is right that they have done so. And surely also it is right that we all try now to think, as clearly as we can, about why Notre-Dame de Paris must, in a manner consistent with its essential nature, once again be made whole.

Some will speak of its astounding beauty; of its great age; of its central and inestimable place in architectural history and the histories of other arts; and of the multitude whom none can number who have, over many centuries, worshipped in and loved this truly sacred place. They will not be wrong to speak of such things; and yet one must attempt to speak if one can in a still more fundamental way. What is this (or indeed any) cathedral for? Why really do its antiquity and beauty matter? And what is the meaning at the deepest level of the ancient rites that countless times have been performed within its walls?

One may say that these questions all point to the same fundamental insight, without which one can neither make sense of a medieval cathedral nor see as possible the satisfaction of the inchoate and rootless longings that are at present all around us. This primary insight, which is both incredible and offensive to the contemporary mind—and yet what it most deeply seeks—was well known to many great thinkers of the past, not the least of whom were the great figures of high medieval scholasticism, such as St. Thomas Aquinas and St. Bonaventure, who lived, wrote, and taught in the shadow of the new cathedral as it rose.

And what, to speak generally, is this supremely consequential insight? It is this: art; religious doctrines and practices; philosophical and theological thinking; beauty of every kind; the enduring, despite their finitude, of temporally finite things over long periods of time; and, in some deep way, every form of human community—all of these things, in the ways proper to them, proclaim that everything distended in time (our lives in their pain and finitude; the discursive activity of self-consciousness; the entire realm of matter and its motion; indeed, every time-bound thing) bears witness to, directs us to, and depends upon a realm of principles that are perfect, timeless, and complete.

The path to this insight, which begins in the West at least in a philosophically explicit way by Plato, is long and difficult; and many questions, especially those relating to the connection between the ideal or heavenly realm and the world of time and change are, to put it mildly, extremely complicated. But one may be certain that—just as Aquinas and Bonaventure affirmed (somehow) the connection between this world on the one hand and the realm of perfectness that gives meaning and unity to this world on the other—the builders of Notre-Dame knew that they built, above all else, to connect heaven and earth.

So let us hope that Notre-Dame soon will be restored; that its outward, sensible, and all too perishable beauty once again will exalt many to a knowledge of a beauty that is inward, intelligible, and imperishable; that the magnitude of its history of almost a thousand years and the grandeur of the vast interior space it contains will in turn proclaim once more what lies beyond time and space; that within it the worship offered will raise the souls of the gathered faithful to a contemplation of the final ends and purposes of human life; and that the hearts of all who come there, perhaps especially those of the young, will be kindled to a love and knowledge of the things that endure, of the things that do not pass away.

James Atkins Pritchard is the Dean of Ralston College, a new institution of higher learning in Savannah, Georgia that is preparing for launch.