The 1930s was a decade sprinkled with literature of all sorts that related fantastic tales concerning the goings-on of Mars and its inhabitants. Throughout the thirties, there were several installments of Edgar Rice Burroughs’s book series John Carter of Mars. Around this time, other historic literary figures took up an interest in the Red Planet and set fictional plots in revolution around this alien world. Among these was C. S. Lewis. 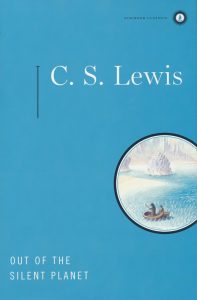 So it happened that 1938 witnessed a bit of a boom in the sensationalization of Martian fiction. For one, it was that year that Orson Welles delivered his radio dramatization of The War of the Worlds by H. G. Wells. A sizeable portion of its American audience mistook the news-like broadcast to be a literal invasion of some kind. In addition to this, C. S. Lewis had his first science fiction novel published that year. It was called Out of the Silent Planet, and the alien world on which the protagonist finds himself is, in fact, Mars.

Even Lewis cannot remove himself entirely from the preconceptions that culture had of the Red Planet. The responsibility for this falls primarily on the shoulders of H. G. Wells, whose War of the Worlds was published in full in 1898. Spattered throughout the text of Out of the Silent Planet, the narrator, as well as Mr. Ransom (the protagonist) himself, toy with the idea of the unknown life-forms on this alien earth and reference the Wellsian notion of creatures dark, loathsome, and utterly un-humanoid.

In this first installment of his sci-fi trilogy, however, Lewis does strive for a fresh take on the theme. One way in which he achieves this is by providing imagery of the Martian habitats that form a contrast with a good deal of the literature up to this point. Mars, as modern man’s continual probing advocates, was seen as a sandy, desolate world. Lewis does not deny such locales throughout the Martian landscape, but also throws in splashes of color—oases of abundant life—and a variety of life.

This is Malacandra—the term used by its natives in identifying their world. In this Lewisian fantasy, Malacandra’s geographical realms vary almost as greatly as those on Earth. There are woods, fields, lakes, mountains, and plateaus: a much brighter picture than the factual Mars. His roseate cliffs and purple forests offer the reader a much more romanticized rendition of the Red Planet. Furthermore, Lewis’s story upends the traditional Wellsian association with Mars, the old-school mindset that sees its inhabitants as little “bringers of war” just as lustful for blood as the Roman god had been. The several races dwelling on Malacandra are mostly removed from hostile tendencies, and it is only the diminutive minds of men that harbor fear and a nature toward violence.

Lewis turns man into the alien, the invader, the enemy of peace. In a poetic twist, humanity’s leap to an unsubstantiated conclusion turns into a crime against the universe. The ruler of Malacandra rebukes Ransom for his perpetual fear and his kidnappers for their wanton dealing of death to Malacandrians. Through Ransom, the reader’s focus is directed inward as an examination of our own morality and an inquiry into our darkest fears.

Fine science fiction, when it delves beneath a surface of mere bedazzlement and awe, is capable of exploring some of the deepest queries into the human condition. These greatest of discoveries come through experience and experimentation. This is what lies at the heart of a classic sci-fi adventure, and these attributes certainly come shining through in Lewis’s novel. Ransom, especially in attempting to learn about the Malacandrian language and social hierarchy, must experience and experiment. He must live life in its natural course and learn from the day-to-day happenings.

Beyond the tone conveyed in the novel, Lewis’s originality also overflowed into the creation of the entities that populate Malacandra. It is in his space trilogy that we discover Lewis’s most creative and unborrowed fantasy development.

While the juvenile-geared Narnia is brimming with symbolism, the sci-fi saga brings fresh, straightforward commentary on the human condition. Moreover, where Narnia is populated primarily by creatures of ancient Greek mythology (the Marsh-wiggle seems to be the chief exception), the handra among the stars are home to a variety of uniquely Lewisian extraterrestrial taxa. Certainly, Lewis uses names of and comparisons to the Greek brutes of the myths even in his space trilogy. Yet, here the creatures differ, for the most part, from anything seen in Earthly nature or recounted in tales of old. The shape and anatomy of the Malacandrian races are unique to this story.

The entities most evocative of Narnian lore that the reader confronts are the simple, poetry-loving hrossa. These mammalian folk dwarf Ransom by a matter of feet, yet they are a kind, family-oriented people. Beyond the hrossa, the other Malacandrian species are quite alien, bizarre either in their shape or simple lack thereof.

The sorns (or seroni) were, at least first off, the most alarming—creatures with which Ransom desired no confrontation. His first close examination of a sorn proceeds as follows:

The face … took a good deal of getting used to—it was too long, too solemn and too colourless, and it was much more unpleasantly like a human face than any inhuman creature’s face ought to be. Its eyes, like those of all very large creatures, seemed too small for it. But it was more grotesque than horrible.

The full description also includes long limbs to accompany an overall elongated frame. Here is a scene of a more traditional alien we are accustomed to imagining in modern times: the elongated form capped with a bulbous head having animal-like eyes. The mind of the modern reader would quickly derive a mental picture of a taller “Roswell Grey” or something like the Kaminoans in Star Wars: Attack of the Clones when thinking of a sorn.

When first noted in a passing conversation, the description of the pfifltriggi race seems rather reminiscent of the dwarves (or dwarfs, if you prefer) of traditional fairytales. They are known as a people of craftsmen, designers, forgers, and diggers, and are short in stature. But once Ransom comes face to face with one, we confront something utterly removed from the human form, resembling more amphibious traits. The protagonist’s first lookover of a pfifltrigg reads:

Its build was distinctly that of a frog … part of its fore-limbs on which it was supported was really, in human terms, rather an elbow than a hand. It was broad and padded and clearly made to be walked on; but upwards from it … went the true fore-arms—thin, strong fore-arms, ending in … many-fingered hands.

The other primary race known to inhabit Malacandra is the eldila, an invisible people. Like light, like wind, they can be felt and noticed, for surely they live and move, yet they have no distinct shape. The Christian reader, just as the man after whom Ransom is modeled, would compare these miraculous beings, capable of flying through the tumultuous and airless heavens, to the angels.

Out of the Silent Planet also includes a number of objects, situations, and connotations that have since become popular in the science fiction genre. One of Ransom’s crass kidnappers jokes early on, while en route to the Red Planet, of his scientific associate having sexual intercourse with a sorn, a notion the other wholeheartedly despises. The conversation evolves out of a mere lack of knowledge concerning seroni biology. However, this idea of sexual connection or even of abuse has since become quite a frequent topic among sci-fi literature and entertainment. In the arena of screen entertainment, this is a clear element in films such as Independence Day and series such as The X-Files. But it also continues to permeate literature, so much so that editors of some science fiction magazines direct their authors to avoid such sexual content because of its overuse.

In Out of the Silent Planet, we eventually are given a scene in which Ransom approaches a “broad avenue of monoliths—a much larger Stonehenge, stately, empty, and vanishing over the crest of the hill into the pale shadow of the flower-trunks.”

Note how Lewis specifically draws a comparison to Stonehenge, an ancient structure of Earth’s architecture that many nowadays theorize as some sort of a landing site for UFOs. The Malacandrian “Stonehenge,” however, serves a purpose similar to the hieroglyphics in Stargate. Through pictorial language, the history of Malacandra unfolds before Ransom’s eyes.

Of course, in retrospect, the term monolith itself carries a significant connotation for the science fiction audience. When we think monolith today, we cannot help but think of the Arthur C. Clarke novel (and Stanley Kubrick film) 2001: A Space Odyssey. Even in 2001, we see a monolith as being able to relate a story, at least in some sense. In Clarke’s story, the monolith always seems to be there at the center of it all; it is the constant: a traveler in time and space that bears witness to the story in its entirety.

Out of the Silent Planet has a unique place among the author’s own work, displaying a flux of creativity resulting in unique races populating an alien world. It should also be noticeable that, while Lewis’s book was a product of a literary tradition of the 1930s, it broke away from many of the traditional Martian tropes and managed to inspire science fiction writers in the years to come.

John Tuttle has written for are Culture Wars magazine, The Millions, Tea with Tolkien, Midwest Film Journal, Catholic Journal: Reflections on Faith & Culture, and the University of Notre Dame’s Grotto Network. He has also served as the prose editor for Loomings, the literary magazine of Benedictine College. Tuttle also has poetry appearing in a forthcoming print edition of Scarlet Leaf Review. He strives to be both a contributor and commentator on the artistic landscape.