The Many Roots of American Order

Nearly four decades ago, Catherine Bowen wrote a delightful little book about the Constitutional Convention of 1787 entitled Miracle at Philadelphia. The “miracle” was that a diverse group of strong-willed, political leaders could, within a few months, produce a document that has served as the foundation for the most successful and enduring experiment in democracy in human history. British Prime Minister William Gladstone described the American Constitution as “the most wonderful work ever struck off, at a given time, by the brain and purpose of man.”

America itself is a miracle. While other nations have declined or fallen over the centuries, America has survived economic upheavals, civil wars and world wars, racial and ethnic divisions, and a virulent counterculture to become the most powerful and envied nation in the world.

What is the source of America’s strength and endurance? Its abundant, natural resources? Its educated, highly skilled people? Its fortuitous geographical location midway between Europe and Asia? Its national will? Whence comes our limited government, individual freedom, free market system, and fundamental values?

In The Roots of American Order, first published in 1974, Russell Kirk provides a convincing answer: America is not only the land of the free and the home of the brave but a place of ordered liberty, which made its freedom and prosperity possible. Using the device of examining five cities—Jerusalem, Athens, Rome, London, and Philadelphia—Kirk traces the roots of American order to long-standing traditions in human history.

First came the Hebrews, who recognized “a purposeful moral existence under God.” For the prophets, the hill-town of Jerusalem was the eternal city for salvation. Next came the Greeks who strengthened the roots with their philosophical and political self-awareness. Athens was where Western philosophy was born, and from it came the Western views of science and the conviction that all areas of knowledge are within the ability of the mind of men. There followed the Romans, with their emphasis on law and social awareness. Rome was the seat of a great empire, and its political administration and stability echoed down the centuries. The roots of these cities were intertwined “with the Christian understanding of human duties and human hopes” and were joined by medieval custom, learning, and valor.

The roots of order were then enriched by two great political experiments in law and liberty centered in London and Philadelphia. But they did not come to pass overnight. Indeed, the British contribution was made possible by six-and-a-half centuries of political experimentation from the Magna Carta in 1215 through the Glorious Revolution of 1689.

The first part of the British experiment took place during what are so often called, erroneously, the Dark Ages. In The Roots of American Order, Kirk lists the contributions of the Middle Ages: our system of common law, the essentials of representative government, our language, our social patterns, and the foundation of our modern economy. Too often forgotten today, they illustrate Kirk’s view that political order reflects custom, mores, and belief.

According to the French political philosopher Montesquieu, the only “grand change in the art of government” since Aristotle was representative government. And its first sign was the Great Charter, the Magna Carta, which the English barons extracted from a reluctant King John. Its lasting principle is simple and yet profound: The law is supreme and must be obeyed by all, even the King.

The Middle Ages was followed in swift and often chaotic succession by the Renaissance, the Reformation, and the Counter-Reformation. Man proposed a new “humanism,” Kirk writes, driven by ego and enlightenment. Protestant reformers returned to the stern teaching of St. Augustine: man loving himself above everything can only be saved by the grace of God.

Out of the Protestant Ethic, Kirk says, came self-reliance, self-examination, endeavor in the secular world, and democracy. England, thanks to Richard Hooker and others, found a middle path between warring factions on the continent and passed it on to America: It consisted of law, liberty, and tolerance. But the passage was not an easy or swift one, in part because of the conflicting ideas of philosophers like Hobbes and Locke.

Hobbes has been called the father of modern political philosophy (although not by Kirk), but his is the politics of authoritarianism. Hobbes argued that the individual’s motives in society are not love and loyalty but self-interest and fear. There is little in Hobbes, Kirk says, of Madison’s idea of carefully calibrated checks and balances. Hobbes would have rejected the moral precepts that Madison and other Founders insisted were essential for a Republic.

Locke is a more relevant influence on America, Kirk writes. His Second Treatise on Government is really an attack on Hobbes’ Leviathan. Locke emphasizes the Social Contract between the governed and the governors and stresses the natural rights of life, liberty, and property. But Locke was an ardent apostle of individualism, Kirk points out, and had no deep affection for the Christian concept of a “community of souls.” There is no warmth in Locke, no sense of consecration. “Utility, not love,” Kirk remarks, “is the motive of Locke’s individualism.” And the Founders of the American Republic, Kirk insists, had a vision beyond mere self-interest and utilitarianism.

The last Englishman that Kirk mentions, and with obvious affection, is the Anglo-Irish statesman, Edmund Burke. Burke, he says, went far beyond John Locke’s utilitarian Social Contract to talk of an eternal contract between the dead, the living, and the unborn. Burke argued that we all participate in this spiritual and social partnership because it is ordained of God.

Before leaving London and traveling to Philadelphia, Kirk underscores the importance of the Bill of Rights drawn up in 1689 and the fruition of English constitutional development during the preceding four centuries. Much of the language of the English Bill of Rights appears in the first ten amendments of the U.S. Constitution. 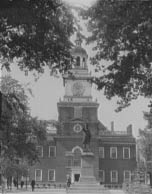 The author then takes up the first of America’s founding documents—the Declaration of Independence. The Declaration was a revolutionary document, Kirk says, a bill of particulars for going to war against George III, but it was not an open-ended justification of revolution under any and all circumstances. It was, in fact, primarily a political document, meant to set forth grievances against the King and the justifications for the political separation of the colonies. Among its 27 specific complaints, not one touched on social and economic conditions.

The Declaration was a conservative document in that it spoke of changing the “government” but not the “state.” As Kirk points out, “government” implied the ministers and other temporary possessors of political power while “society” meant the establishment civil social order. Still, the Declaration was a radical document in the sense that it reasserted a political autonomy rooted in the North American continent ever since the landings at Jamestown and Plymouth.

Eleven years later and now citizens of a new nation, the delegates to the Constitutional Convention in Philadelphia met to revise the Articles of Confederation. They wound up producing a whole new constitution. It was a practical document, says Kirk, attempting to resolve the conflicting demands of freedom and order. Its composition demanded balance, firmness, and yet a willingness to yield because the delegates had to (a) uphold order but not reduce true liberty, (b) produce a reasonably strong national government while not reducing the states to mere provinces; and (c) provide for an effective chief executive who could not, however, become a king ordictator.

Montesquieu would have applauded America’s brand of federalism, Kirk writes, and its careful separation of powers within the national government. The delegates assembled in Philadelphia had formed a government of laws, not men.

“Whatever the failings of America in the eighth decade of the twentieth century,” Russell Kirk wrote thirty years ago in The Roots of American Order, “the American order has been a conspicuoussuccess in the perspective of human history.” As he summed up: “Under God, a large measure of justice has been achieved; the state is strong and energetic; personal freedom is protected by laws and customs; and a sense of community ensures.”

Would Kirk be so generous, so optimistic today? I am not certain, as the heritage of these five cities has been badly battered. But I know he would draw strength and confidence from the lessons of Jerusalem, Athens, Rome, London, and Philadelphia and from the observation of a president he much admired, Ronald Reagan, who once said to a group of student leaders:

“My young friends, history is a river that may take us as it will. But we have the power to navigate, to choose direction, and make our passage together.”

Lee Edwards is a Distinguished Fellow in Conservative Thought at the Heritage Foundation. He is currently writing a short biography of William F. Buckley Jr.