The New Storytelling, From Tocqueville to Fortnite

Computer games are the least discussed of our massive entertainment industries. Gaming is uniquely dominated by men and newest among our forms of entertainment, so the suspicion that it owes its success to its criticism of our society is still fresh. It really is true we prefer gaming to reality because reality fails to entice, guide, and reward us—especially us men.

Society and commerce have normalized games, but this can only begin, not end, the quarrel. In a time of increasing cultural hysteria, we should be preparing to deal with the worst, and so we need some enlightenment—we need to start with Tocqueville. The sagest writer on America and democracy covered this, too, and under four chapters: poetry, the press, business, and education. 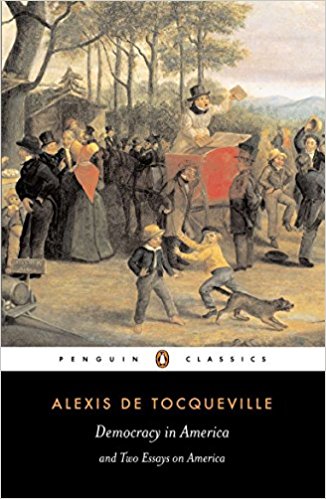 First, Tocqueville prophesied that the democratic age would be the end of epic poetry. No more splendor and glory in storytelling. The egalitarian taste tends to the banal and everyday, not Homeric demigods. To comedy, not tragedy. This doesn’t mean we have no need for heroes. Young men’s unique preference for heroes—comic book heroes—has conquered much of Hollywood, but these creatures are funny, neurotic, sarcastic, and make fools of themselves. The movies almost invariably tell us heroes need some therapy so they can grow up and stop being boys.

If they’re real heroes, what are the monsters they must fight? These comical figures save the day, but never from any real enemy. Mostly, no one remembers the villains or the plots. Just the witty remarks, visual gags, and soundtrack. As genres go, this is musical comedy, not action. This is why movies, unlike games, can only replicate, but not redress the restlessness of young men who find no place for their yearnings in American society.

Second, let us consider the press, the other big part of public storytelling. Tocqueville noted that Americans prefer the exposé, because they cannot concede the legitimacy of their adversaries’ interests and principles. We are forever busy trying to find out the ugly truth about the other party and cannot even agree elections are legitimately decided anymore. What side you are on matters more than what your argument is.

This guarantees occasional acrimony, which young men like, but destroys any chance for greatness. Our suspicion creates mediocre politicians and leaves us no one to admire and emulate. All heroes are cut down to size, incessantly accused of villainy for the benefit of more than half the nation. We do it for love and we do it money and we cannot help it, so yet another arena for heroic ambitions is corrupted. The young voted for Mr. Obama, but he soon disappointed them, with the eager assistance of the conservative faction of America. Now, it is the liberal faction straining every sinew to prove Mr. Trump a fraud, a criminal, and loathsome rather than admirable. Total cultural war yields total hopelessness and makes fantasy truly preferable to reality.

Third, education. You might object: That is just movies and politics. Surely, Tocqueville knows what we all know: Americans get their dignity from work—doing something with their lives, making something of themselves! Work satisfies the young man’s ambition by success! Practice, not fantasy! But to be somebody, you now have to have the right schooling, and American education is dominated by girls at every level up to PhD’s. Meanwhile, most expulsions and suspensions are reserved for boys and two thirds of young men who enter four-year colleges do not graduate within six.

Were it any population but males, the press and the politicians would be calling it systemic discrimination and disparate impact in the most hysterical terms. Instead, we the people drug boys into obedience in school; later many drug themselves to endure lives they loathe. Education breaks the spirits of American boys instead of preparing them for difficult tasks that would reward their efforts. Now we know the price we pay for Tocqueville’s famous remark, that there is no higher education in America. Because we cannot teach the spiritual discipline of the liberal arts, we damn boys to debt and rage.

Fourth, business. Most of us work somewhere or other and that is when we meet the death of hope: Corporate HR. The life of commerce forces on young men a niceness they cannot but hate and wish to escape as digital beasts. The stifling egalitarianism that seeks to avoid all offense, not least for fear of litigation or public scandal, not least under threat of firing, makes non-judgmental conformists of us all.

Tocqueville predicted that commerce would not just soften manners and make us more civilized, but humiliate the dignity of the male, boisterous half of the country. This has long caused American men to run away from places that are too civilized and seek out newer and newer frontiers. Out West, freedom reigns! Well, that is not happening anymore. But you can still escape reality in the virtual world—which might be the final frontier, in every sense. This is not a bad thing. If young men feel the need for a space of their own, they should be taught how to deal with it, not denied it. It may be easier for young men and women to live with one another if men have the necessary poetry to educate themselves about their character.

With such realities, boys and men turn to computer games, where the physical danger is not real, but the adventure is more real than in most environments. Not that they turn to violence and war in games because they are frustrated by social failure and humiliations. Nor do they turn to games to prepare for violence or because that’s what they really want out of life, either. Games are not essentially negative—they are positive in the same way poetry is. They are the fictional, fantastic freedom that counterbalances the exaggerated egalitarianism of society and commerce and politics. They capture the imagination with stories of heroism and allow young men to learn what it means to be men, in a world where they fear they might never otherwise see it.

If nowhere else, success and distinction are available there. Games are far more inventive as storytelling than movies, nowadays, and have far more influence on young men. They may even be more important than music, the major source of identities for the young in post-war America. Games now provide millions of young men with a public imagination. This is perhaps why the press and public intellectuals of America neither understand nor respect them—these crumbling authorities believe in arguments, sometimes in social science, but they are essentially anti-poetic. They are society’s highest form of repressing the imagination. Games both show that digital technology is going to destroy a lot of society, especially where intellectuals play, and that poetry is coming back with a vengeance, unlike the empty, foolish intellectualism of the press. We are, with new technologies, waking up to the fact that games are poetry. They are storytelling we inhabit and from which we learn in mysterious ways that bypass argument, assertion, or appeals to the authority of scientific study.

There are other secrets that cannot be discussed in public. A major attraction of games is how few women are involved. Given the attractions of video games, it is not an accident the entertainment is male-dominated and male freedom will likely include more loneliness in future.

Young men inevitably deal with the American crisis by fantasy. The only real discussion is how to make games and gamers smarter, more humanistic. Popular games, often foolish, are less so than very successful movies—but we need to do much better. We should get on with the work of creating a future where fantasy still encourages great storytelling. This should include Shakespeare games—a likelier proposition than popular Shakespeare movies, by the way, and next, Homer games—which is unlikely to happen in Hollywood or on Netflix. The epic and the tragic, now minor preferences in society, though they’re our primary poetic resource, will inevitably migrate to games. Storytelling on a grand scale that seeks to bring out the possibilities of human nature which our society does not tolerate has been the soul of gaming for a generation now. It’s time we acknowledge it and deal with it.

One way or another, a great part of education in the future will be computer games. It is already happening, because we don’t say no to technology and we don’t say no to money. Young men eagerly throw money even to see other young men play games. If we realize that games are now what sci-fi and comics were for young men of previous generations, we should realize, too, that the future is more gaming, not less.

So we have to begin to reckon with this as a sociological phenomenon, despite the anti-poetic character of our intellectuals and their hatred or contempt for the narratives of heroism that dominate games. It doesn’t even matter if the rest of us don’t want an America where young men care about games instead of the things we want them to care about. The best we can do is understand games, embrace them, and improve them.

Titus Techera hosts the American Cinema Foundation podcasts and is a contributor to The Federalist, National Review Online, Catholic World Report, and the University Bookman. He tweets as @titusfilm.