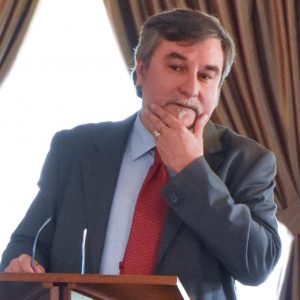 Marco Respinti is a Milan-based journalist, essayist, translator, and lecturer.

A scholar of Anglo-American conservative thought, he contributes to daily national newspapers such as Libero, Il Foglio, Cronache di liberal, Il Tempo, and l’Occidentale, Ragionpolitica, il Quintuplo and 1 Channel (online), as well as to the weekly magazines Tempi and Oggi, the monthly journals Il Timone and Radici Cristiane, and the quarterly Cristianità.

From 2002 until 2009, he worked as a Senior Editor at il Domenicale, the first Italian independent national weekly magazine of culture based in Milan. Then, from 2010 until 2012, he worked at La Bussola Quotidiana, a Catholic daily journal of opinion.

Marco is also President of the Columbia Institute, a cultural and educational organization devoted to serve and protect the Western heritage of life, liberties, and property, operating toward the restoration of the humane and virtuous society of responsible citizens, limited government, free enterprise, natural family, and traditional moral values. He is the editor of the series of books, US Polis, published in Chieti by Solfanelli in conjunction with the Columbia Institute in Milan.

Marco has lectured widely outside Italy, including for the Russell Kirk Center, the Intercollegiate Studies Institute, Young America’s Foundation in the U.S. as well as at the Italian Cultural Institute of London; the Občanský Institut–Civic Institute of Prague; at the Instituto de Estudios de la Democracia, Cátedra de pensamiento político “Alexis de Tocqueville,” at the Colegio Mayor Universitario de San Pablo, Spain; and for the Center for European Renewal in Budapest, Hungary.

He and his wife Paola have two sons.