The Arrogance of Blueprints

A conversation with Amity Shlaes 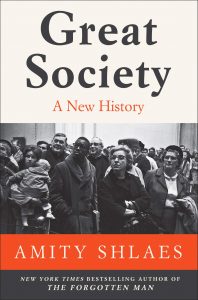 The Bookman is pleased to speak with Amity Shlaes about her new book Great Society: A New History. Amity Shlaes chairs the board of the Calvin Coolidge Presidential Foundation, and is the author of six books, including four New York Times bestsellers. Her history of the Great Depression, The Forgotten Man (2007), has been translated into numerous languages. Readers know Miss Shlaes’s columns from the Financial Times (2000–2005) and Bloomberg (2006–2013), or the Wall Street Journal, where she served on the editorial board. Miss Shlaes chairs the jury for the Manhattan Institute’s Hayek book prize.

Amity, thanks for speaking with us. Tell us a little bit about the genesis of the book.

Nostalgia for 1960s policies has grown lately, probably because people don’t remember the results of that policy. This book covers the errors of the Kennedy, Johnson, and Nixon administrations—with an emphasis on cabinet members, or the government’s partners and foes, such as trade unions, or, often businesses. People ask what I made of the Presidents. The book isn’t about the Presidents, it’s about the men who worked with and served them. In that sense it is a kind of a domestic version of David Halberstam’s Best and the Brightest. And the domestic policymakers failed for the same reason the defense policymakers failed: arrogance. They overlooked reality because they were in love with their own blueprints. The strategies in the War on Poverty had the same flaws as Robert McNamara’s bombing strategy: they were written from 10,000 feet, without regard to the individuals below.

Your previous book, The Forgotten Man, focused on the Great Depression and the reaction to it. Your new book opens in 1964. How was the nation changed in the decades in between in how they reacted to different crises?

The 1930s New Deal yielded such disappointing results that Americans became somewhat wary of large domestic social programs, or government management of the labor market. Soon after World War II, Congress overrode Harry Truman’s veto of its Taft-Hartley Act, it wanted to constrain organized labor so badly. Taft-Hartley basically neutered the New Deal’s mighty Wagner Act. But the success of World War II pushed Americans back toward the collective. Together we had conquered in Europe and Japan; after that, as Norman Podhoretz once wrote, meeting domestic goals, including abolishing poverty, seemed easy tasks, like a “mopping up action.”

The subtitle indicates that this is a “new history.” Why was a new history needed?

The Sixties were more than Woodstock, or civil rights, or even napalm. I wanted to tell the story of life at home among ordinary people, black or white.

But the most important reason new histories, whether by me or someone else, are needed is economics. Most older histories take a Keynesian approach, which means they see nothing wrong with using fiscal or monetary policy for stimulus. That is, they replicate the errors of their subjects, the characters of the 1960s. One of the tragicomic scenes in the book is when Nixon and his men, including Fed chairman Arthur Burns, come together, like Olympian gods, at Camp David and write policy as if they were writing the laws of economics themselves. The most self-aware of the attendees, Herbert Stein, even wrote a parody of the Camp David economic directives, casting them as the Ten Commandments.

And the results of such Keynesian policies, the stimuli and micromanagement by government in the 1960s and early 1970s, were terrible: the inflation and unemployment of the 1970s. Needed was a book that looked at the 1960s from a classical economic perspective. Only classical economics can explain the 1970s.

Another problem: the older histories of the 1960s treat business as a kind of reliable domestic animal, a pack horse or milk cow, there to provide tax revenues for idealistic government projects. My own impression was that business actually saved the day. We wanted a Great Society. It turned out that business could get us closer to great than government programs. Three companies get especial attention in Great Society: General Electric, Fairchild (which became Intel), and Toyota.

It’s important to mention a book that differs from the other traditional histories, and influenced me: Allen Matusow’s The Unraveling of America. Matusow sees through Great Society bravado. He argues—and I think he’s right—that Nixon merely continued the Great Society. Nixon and Johnson were actually quite similar.

Also: The Stanford scholar John Cogan wrote a wonderful book about entitlements that came to my attention as I was working on Great Society. The High Cost of Good Intentions offers up numbers that confirmed my own analysis. Any Great Society student should look at Cogan’s work.

You acknowledge the dreams of activists like Michael Harrington for “full socialism” in the United States failed, and instead a compromise of sorts between big business and government arose. What was wrong with this arrangement?

Partial socialism or social democracy, the usual compromise, does far more damage than we expect. And government folly builds upon folly. Such folly, in the Philip Larkin poem, “deepens like a coastal shelf.” If this book validates the theories of any economist, it is those of Friedrich von Hayek, who explained that incremental expansions of government, especially when they are justified by crises (wars, or say, pandemics), push us down the Road to Serfdom.

Can you tell us a little bit about how corporations reacted to the Great Society initiatives. In one sense the large corporations stood to benefit from cozy relationships to big government.

Big business is not always entrepreneurial, especially when it lives off contracts from government. In fact, business and government together, especially when organized labor unions join them, can block or hurt enterprise. President Eisenhower was correct to warn about the “military-industrial complex.”

You describe the book as a “cautionary” tale for those who look to socialist reforms for economic problems. How so?

It’s remarkable the extent to which many of today’s proposals replay 1960s proposals or programs. From universal income to increases in the minimum wage, expansions of the federal role in health care, welfare expansions, or changes in the legal definitions of our rights, all echo or repeat 1960s plans. Those 1960s projects by and large did not work out.

What about civil rights?

Basically, the book finds that the first civil rights laws, especially the Civil Rights Act of 1964, were necessary. The switch to affirmative action, which Johnson led in a speech at Howard University, was more questionable.

Would you say the Great Society initiatives were a cultural as well as an economic/political force?

Of course. Culture and economics are related. Was it cultural, or economic, when World Bank head Robert McNamara had the hubris to go to the campus of Notre Dame to argue for population control? Both. The new reformers, whether in government or among social scientists, shared an incredible arrogance. Brink Lindsey of the Cato Institute has argued that 1960s liberalism was also libertarian liberalism—the same individualism that led to rock music led Intel executives to break away from the old work of the electronics industry, servicing defense. There’s a case for that, too.

There have been some gestures toward a return to socialism in recent years among some Western elites. To what do you attribute that?

Amnesia. The memory of the New Deal’s failings faded in the 1950s, and the idealistic faith in social programs grew again. By the 1960s the country seemed ready for a New Deal repeat, just as now Americans seem ready to try socialism. “Nothing is new,” as the adage that opens the book goes, “it is just forgotten.”

What if any role do governments—even state or local—play in regulating industry misconduct?

Government encouraged business and unions to believe that economic growth rates should be set by a few men around a boardroom table. When business “disobeyed”—as, say, Roger Blough of U.S. Steel did when he set steel prices higher than JFK liked—the Kennedy Administration punished the disobedient companies like six year olds. Chapter One of the book tells the story of the Kennedy Administration’s prosecution of GE for price fixing. GE was guilty, but the prosecution was also political. The human collateral damage of the GE scandal included Ronald Reagan. Reagan, then a p.r. man for GE, lost his job.

One character in the book is Walter Reuther. Tell us a little about why he is important to the story.

Walter Reuther, like Daniel Patrick Moynihan or Arthur Burns, is one of the flawed heroes of my book. Reuther, the leader of the United Auto Workers, fought for civil rights side by side with Martin Luther King. He even helped to raise the bail for Martin Luther King when MLK was in the Birmingham jail. Reuther also actually funded the founders of Students for a Democratic Society, who later became radical and then anarchist and violent—the Weathermen. (Tom Hayden is a character in this book; one chapter covers his trip to Hanoi, which preceded those of his wife, Jane Fonda.) The bitter truth, which he lived to see, was that young people he had backed helped give the election to his greatest opponent, Richard Nixon.

But Reuther’s greatest error was that, wittingly or unwittingly, he conspired with the automakers to make Detroit uncompetitive and thereby to open the door for foreign automakers. No one who has seen the recent film Ford v Ferrari, about Henry Ford’s obsession with race cars, can come away without the impression that Henry Ford II was a goof. That is also my impression. One chapter of this book is called “Reuther and the Intruder”—the intruder being Toyota. Reuther’s life was a tragedy, since he hurt the people he loved, auto workers. Reuther also died tragically, crashing in one of the dangerous early LearJets.