The Revolution That Did Not End in Blood

A Conversation with Antonia Fraser 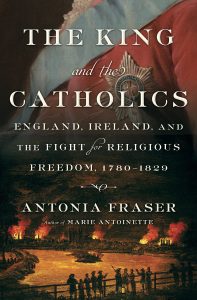 Antonia Fraser is the author of many acclaimed and bestselling novels and historical works, including Mary Queen of Scots; Cromwell, Our Chief of Men; and The Gunpowder Plot: Terror and Faith in 1605. She has won the Wolfson History Prize and the Medlicott Medal for Service to history. Fraser has been President of the English PEN and chair of the Society of Authors. She was married to playwright and author Harold Pinter, who died in 2008. Fraser’s latest book is The King and the Catholics: England, Ireland, and the Fight for Religious Freedom, 1780–1829, which depicts the political issues arising from religious intolerance during that epoch.

The story of this book begins in violence, in the summer of 1780 in London, which was the scene of the worst riots the city had ever experienced. What was the significance of the riots?

They were known as the Gordon Riots, and were famously commemorated later by Charles Dickens in Barnaby Rudge, when he talked about a “moral plague” running through the city. The death toll was somewhere around one thousand people. The riots were led by the militantly anti-Catholic Lord George, who was the son of a duke and also a Member of the British Parliament. The riots revealed the depth of anti-Catholicism, or anti-Popery, as would have been said at the time. They displayed how Catholic emancipation wasn’t going to be an easy thing to win.

What did Catholics need emancipation from? Could you explain the restrictions, in law, for Catholics during this period in both England and Ireland?

It all comes from the Penal Laws, which came about after the Protestant Reformation in England in the sixteenth century. And then there were further troubles after the so-called Glorious Revolution of 1688, when William III took the throne from the Catholic James II. At this time Catholics could hold no positions of power. They couldn’t be MPs, sit in the House of Lords, be magistrates, sit on juries, or hold commissions in the army. Catholic ceremonies were illegal. You couldn’t have a Catholic marriage. If you were a Catholic and you wanted to be married, you had to have a pretend Protestant marriage. Worst of all were the inheritance laws that were against Catholics. For example, if you were a member of a large family and about to inherit an estate, a Protestant could come along and take the entire estate by law. Catholics could not attend universities or take degrees either. There were also issues around religious dress in public too: religious dress of nuns, monks, and priests, for instance, could not be lawfully worn in the streets. And any signs of Catholicism in public, such as the sound of bells at Catholic chapels, were strictly forbidden.

The enemies of England in Europe during this time were all Catholic too, right?

Of course England had fought Catholic enemies, not just because they were Catholics, but because they were enemies. Namely sixteenth- and seventeenth-century France and Spain. An important turning point here was the French Revolution, when a lot of Catholic refugees came to England from France. This was because nuns and priests had been made illegal in France and some of them were executed. Catholics who came from France during this time were no longer seen as enemies, but as refugees.

Catholics in England clearly benefited from the effects of the French Revolution. But the effects in Ireland were very different.

Yes. The revolt of the United Irishmen in 1798 in Ireland, led by the Protestant Wolfe Tone, was particularly important here. Tone had looked to French forces for help and had already written a pamphlet in 1790, entitled An Argument on Behalf of the Catholics of Ireland. This stirred up suspicion from England [thereafter], who believed Ireland might provide a backdoor to England’s enemies.

Shelley was only nineteen then and had recently been expelled from Oxford University. His visit was part of an overall cultural trend from writers in England at the time, which was generally towards liberalism and decency. Shelley had the avowed intention of supporting the Irish people and wanted to draw attention to what he saw as their sufferings at the hands of tyrannical England. In particular he advocated two reforms: Catholic emancipation and the repeal of the Act of Union. He had already written a poem for the Irish in 1809. And on his visit to Ireland in 1812 he published a pamphlet, An Address to the Irish People, of which 1500 copies were printed. He also wrote a poem in tribute to the Irish republican, Robert Emmett, who was executed in 1803 for his rebellion. It’s also worth noting that the poet William Wordsworth went completely the other way: he was against Catholic emancipation.

How did the captivity of Pope Pius VII at the hands of Napoleon from 1809 to 1814 influence Anglo-Papal relations during this period?

It meant that Napoleon, not the pope, became England’s enemy thereafter. The Pope stopped being the bogeyman and became instead the captive of England’s enemy. Also, the visit of Cardinal Ercole Consalvi to England in 1814 was hugely important. He was probably the first Cardinal to come officially to England since the sixteenth century. Consalvi was very helpful in delivering the legacy of the dead Stuart King to the living Hanoverian King.

The two heroes of your book are Daniel O’Connell and the British Prime Minister, the Duke of Wellington. What role did both play in bringing about Catholic emancipation?

O’Connell said that violence was not the way forward. And in the end he paved the way for Catholic emancipation when it became law in April 1829. No blood was shed in the process. As O’Connell himself aptly put it: “It is one of the greatest triumphs recorded in history—a bloodless revolution.” The Duke of Wellington, who was a Protestant and a Tory, saw sense too, understanding that [granting emancipation] was better for peace and for the welfare of England and Ireland. Both these men—separately of course—saw that the way forward for England and Ireland was not warfare, blood, and rioting, but negotiation. So while the story of Catholic emancipation begins in blood, it doesn’t end in blood.

In a speech Daniel O’Connell gave in 1824, he referenced the South American revolutionary, Simón Bolívar. How did Bolívar capture O’Connell’s imagination?

Bolívar captured the heart of all of Europe and was a very important figure of inspiration. He had secured liberty for South America from the Spanish military force in February 1819, becoming President of Gran Colombia, which included much of modern Colombia, Ecuador, Panama, and Venezuela. He had also defeated the Spanish cavalry in Peru at the Battle of Junín in 1824.

The Venezuelan leader was hailed as El Libertador, from which O’Connell would derive his own honorific, the Liberator. Bolívar was then what Daniel O’Connell has become. And the recent surge of independence in South America had caught O’Connell’s imagination because of the obvious parallels with Ireland. In O’Connell’s speech in 1824, he said that he “hoped Ireland should be restored to her rights, and if she were driven mad by persecution, that a new Bolívar may be found, and that the spirit of the South Americans may animate Ireland.”

Was the major turning point for emancipation through the Roman Catholic Relief Act of 1829 that Daniel O’Connell had run for Parliament and won a seat as an MP nine months earlier in the County Clare by-election?

Yes. The keynote of his campaign, which was to be of vital importance in the future, was struck by O’Connell when he announced that “ours is a moral not a physical force.” The people of Clare were told to abstain from violence, which was common for elections at the time, and alcohol was banned too. O’Connell was obviously a Catholic, and as such, was held to be ineligible for the British Parliament. He suggested that the eyes of Europe would be on events in Clare. The winner of the Co. Clare by-election was announced on 5 July 1828, and the winner, by 2,057 to 982, was Daniel O’Connell, a Roman Catholic.

O’Connell was clearly elected, but as a Roman Catholic he wasn’t allowed to sit in the British Parliament. What happened then?

The controversy surrounded the fact that O’Connell would have to take an oath of allegiance [the Oath of Supremacy] to be admitted to the House of Commons. He said as a Catholic he could not take the oath. Parliament insisted that O’Connell had to take the oath. So the seat for Co. Clare was declared vacant. And he had to go back and face another election. But of course he won that election in July 1829. And finally he came to Parliament in a wonderful moment when he took his seat on 4 February 1830.

O’Connell would subsequently acquire the name “King Dan” or “the Liberator.” What were his greatest assets as a political leader, orator, and campaigner?

Well it was clear from early on that O’Connell displayed extraordinary charisma. He also proved to be an orator of unmatchable fervor. O’Connell’s appearance, much like his contemporary, the Duke of Wellington, became inextricable from the legend. He was a showman and could often be seen strolling through Dublin with his umbrella shouldered as if it were his pike. From the start he was steadfast in his opposition to violence: this divided him from the United Irishmen of 1798. And his strongest desire was for the repeal the Act of the Union, to which he was a dedicated adversary.

Following emancipation certain roles were still denied to Catholics, not least the role of the monarch. You mention, for example, that the Act of Settlement 1701 (which stated that Catholics or those married to Catholics could not succeed to the throne) was not repealed. When did that change?

A member of the royal family [today] can marry a Catholic. They used to have step out of the Royal succession for doing so. For example, when Prince Michael of Kent married Princess Marie Christine in 1978 he left the succession because she is a Catholic. But in 2013 the law was changed.

What would happen if a member of the British Royal family wanted to convert to Catholicism today?

If someone who was in line to the current British throne converted to Catholicism, it would be difficult to see how they could become King or Queen because the King or Queen is also head of the Church of England. But if you disestablished the Church of England—which is something that might happen—and then consequently the King or Queen was not head of it, then there would no objection, I suspect. The next step in the UK is to have a Catholic Prime Minister. I always thought it was sad that [former UK Prime Minister] Tony Blair, announced his conversion to Catholicism after leaving office. Because if he had said “I’m a Catholic, what are you going to do about it,” he might have broken new ground.

JP O’Malley is an Irish writer living in London.