The following article appeared in the Sunday News Magazine (Detroit, Michigan) on February 24, 1974.
If ever the poems of T. S. Eliot should be published in a splendid illustrated edition, Renee Radell ought to be the illustrator. For like Eliot, Mrs. Radell shows us the symbols of hell, purgatory, and paradise in 20th century forms.

Her armed vision discerns the boredom, and the horror, and the glory of this age. Her high talent with the brush transmutes a moment’s experience into a timeless image. She is a painter possessing moral imagination. This year Renee Radell is artist in residence at Detroit’s Mercy College. She has lived for several years far up a country road near Lake Orion, in an inimitable sprawling house—studios and living quarters intertwined—that she and her husband built with their own hands.

Her husband is Lloyd Radell, a masterful figurative and portrait sculptor who casts his own bronzes. As the administrators of Mercy College know, the work of Renee Radell is closely related to the mission of that college. Six of her paintings hang there in administrative offices. Among pictures of hers purchased by Mercy in 1964 is “Blind Child”— as allegory of the intellectual blindness of young people entering college. Through reason, Mrs. Radell affirms, the intangible may be made tangible. That is what she attempts in her paintings. Also, that is the aim of the higher learning.

She is moved nowadays to turn to mural paintings on a large scale. Mercy College hopes that it may be possible for her to undertake such a permanent work to embellish either the chapel, the student center, the library, or a future science building.

She does not paint for the academy only. Some of her pictures hang in the Washington apartments of influential men, and she is represented at the Detroit Art Institute and other museums.

She declares that the shopping mall, too, should be something better than Vanity Fair. Lloyd Radell’s castings full of vitality in deathless bronze, adorn new malls in Grand Rapids and Kalamazoo.

Mrs. Radell is small, dark, and glowing with imagination. She was born in Alabama of Lebanese parents, but has lived most of her years in Michigan. One fancies that she will be youthful always. Despite her charm that is almost childish, she is the mother of five accomplished children. In my old house at Mecosta, Michigan, hangs her portrait of her youngest child, Raissa (named for the wife of Jacques Maritain), a solemn little girl with great black eyes.

The children whom Mrs. Radell paints occasionally, in oils or watercolors, are immersed in a world of wonder. One thinks of the child in Eliot’s poem “Animula,” who—

“Confounds the actual and the fanciful,
Content with playing-cards and kings and queens,
What the fairies do and what the servants say.”

But Renee Radell is a painter of children only incidentally. Most of her adult figures lost their sense of wonder long ago. She paints our modern confusion—so that we may recover order, seeing our own follies.

“We mean all sorts of things, I know, by Beauty,” T. S. Eliot wrote in one of his early essays. “But the essential advantage for a poet is not have a beautiful world with which to deal: it is to be able to see beneath both the beauty and ugliness; to see the boredom, and the horror, and the glory.”

So it is with such a painter as Renee Radell. Much of the world she has known is ugly enough: yet, she looks upon our present failures unafraid. From our milieu she extricates what Eliot called “the permanent things,” those truths about the human condition which renew mind and conscience.

Although Mrs. Radell knew some of Eliot’s poems before she happened to read my own book about Eliot, she was unaware of the close parallel between her painting and Eliot’s verses.

Her earlier work, like Eliot’s earlier work, is a mordant examination of modern decadence. The pictures of her first period remind one strongly of the pictorial satires of Daumier—but probably she was unaware of that parallel, too.

An eminent literary critic, misunderstanding Eliot’s intention, said that Eliot had exposed the disillusionment of a generation.

With Renee Radell’s early paintings, similarly, it would be easy enough to assume that she despaired of human kind. Yet, her true purpose is to remind us of the norms for humanity: to delineate our sunk condition, so that we may recollect what human beings are meant to be.

Take her picture, “Descent into the Hell of Indifference” (1963), a big painting, three feet by eight. The bored and vacuous faces she depicts are self-condemned. Withdrawn into the prison of the ego, the people of “Descent” have cut themselves off from the light. They are world-weary without ever having known the glory of existence.

Their faces pinched and puffy, the people of “Descent”—and of many other Radell canvases—are enslaved by their appetites and have destroyed their own feelings. But it is far otherwise with Renee Radell, for she is full of energy and hope.

Or consider “Doing Their Thing,” painted at the depth of campus unrest in the ’60’s. In the foreground stand two young persons, unisex figures, blocking the way. They are grinning, with the mirth of hyenas. They hold signboards, but their placards are quite blank. They are sour and smug nihilists, birds who foul their own nest. 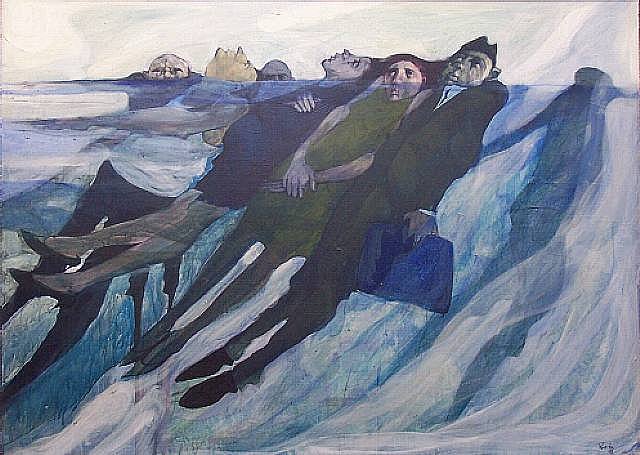 Then there is “The Tide,” perhaps the most arresting and frightening of Mrs. Radell’s pictures.

A half-dozen men and women, fully dressed, float dead or dying in an ebb-tide, unresisting. The life of spirit passed out of them long ago. They are marine counterparts of Eliot’s Hollow Men, in “death’s dream kingdom,” too flaccid of will for survival. They are the indifferent whom God has spewed out.

Her “Political Fertility Rite” is merciless toward our politics. At a political dinner, the flag draped behind the dais, ten philistine admirers cluster round some successful strong-featured public man. One suspects that the dominant figure is a white sepulcher. He strongly resembles Mr. George Romney, or Mr. Nelson Rockefeller, whose stars were in the ascendant when this picture was painted (1968). But Mrs. Radell says that she did not have a specific politician in mind, but a type.

Is Renee Radell, this clever discloser of frailties, an unfeeling cynic? No, she isn’t—decidedly not. Warm-hearted and spirited, Mrs. Radell participates in the tragic sense of life.

Eliot once called James Joyce the most orthodox of modern writers, innovator in syle though Joyce was. I am tempted to call Renee Radell the most orthodox of painters, for faith glows out from her striking colors. I do not mean that her art in the least resembles the stuff commonly sold in “religious goods” shops. She is never falsely sentimental, and never conventional in the bad sense of that word. Nor does she peddle vapid abstraction under the guise of “new breed” religious awareness.

Renee Radell makes ancient religious insights relevant to these closing decades of the 20th century. Her picture “Irrelevance” rebukes the blindness of those moderns who break with all tradition. Her amusing and devastating “Where’s Marlboro Country?”, its bewildered people little helped by their seeing-eye dog, refutes the notion of a utopia here below.

“Cloud Nine,” with its airbrushed clouds, undoes the folk who vainly seek refuge in illusory dreams. Mrs. Radell is a champion of high reality, and she affirms that we can perceive the real only through an awakening of spirit.

Her more recent paintings lead us toward reality through a series of “Dream Sequences.” These pictures, rich in minute detail, outwardly are unlike her earlier work: they are lovely, the expression of glory instead of horror.

The beauty of this recent development in her style does not signify that Renee Radell has become “progressive.” She sees humanity falling off a rainbow; she shows us fallen angels who have rejected God. She paints what Max Picard called “the world of the Flight”—the modern desperate attempt to flee from God into nothingness, a flight which produces total disorder in the soul and in society.

Her Giotto-like “Angel of Plenty,” a wall mural 8 feet by 16 feet long, presents delusory earthly delights, which cannot satisfy. “More!” is the legend on a sign of protest in this picture. Instant total satisfaction of the senses is what the average sensual man expects from the Angel of Plenty. He will be given his heart’s desire, and the iron will enter into his soul.

All life is an allegory, G. K. Chesterton wrote once, and we can understand it only in parable. Mrs. Radell’s paintings are visual parables, clues to the great allegory of the human condition.

Little of today’s art, I suspect, will survive the tooth of time. Junk sculpture, and “abstract” painting abstracted from vacuity, will be tossed aside by future generations. To endure, art must refer to the permanent things, to those norms and hopes and fears which remain virtually constant from age to age.

Therefore, I suspect that the paintings of Renee Radell will be proudly exhibited and much discussed when most other artists’ work of our era has sunk down to garage sales, if it has not vanished altogether. Her technical skill is diverse: she could be a naturalistic painter, if she chose. But she understands that ultimate questions can be answered, nowadays, only through myth and symbol.

Because her pictures strip the ragged follies of our time, they will be preserved as brilliant period-pieces. Better, these paintings by Renee Radell will live because their imagery reveals that human nature is constant, for ill and for good.