An Elegy for Place and Time 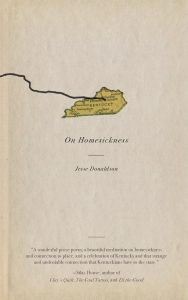 Reviewed by Jacob A. Bruggeman

Robert Frost once wrote of a poem’s beginnings as “a lump in the throat, a sense of wrong, a homesickness, a lovesickness.” So Frost described his craft in a letter to a friend, another American poet, Louis Untermeyer, and then went further, explaining that a poem is “a reaching-out toward expression; an effort to find fulfillment.” The poet reaches that “fulfillment,” Frost continued, when “an emotion finds the thought and the thought finds the words.”

Jesse Donaldson’s On Homesickness: A Plea is an admirable attempt at articulating the “lump in the throat,” the “wrong,” and the “sickness” an individual experiences when away from home. Anyone who knows this feeling knows that it’s many-faced; it takes the form of homesickness or nostalgia, it can be triggered by an emotion, a thought, an object, a voice. Human responses to homesickness are as diverse as are humans themselves, but through the majority of our reactions to this particular kind of uprootedness runs an understanding that “just because a thing is unseen doesn’t mean it’s not real.” The recognition of that “thing”—a region, city, town, riverbank, a room in which one was raised, a place one once called home—and its importance can make its absence a real as the thing itself.

The home Donaldson pines for is in his native state of Kentucky. Donaldson’s is a familiar story: He, like so many other Americans who annually move away from the hollers, Main Streets, and sleepy towns of their youth, relocated to Ohio for education and to Oregon for employment. However, unlike many of those Americans, Donaldson recognizes that his embrace of new communities marked an abandonment of his home. “Let this be a warning,” Donaldson writes of his book, “about how fleeting our homes can be, about how what is lost is often never recovered.”

What Donaldson yearns for is the “lockstep” rhythm of life that emerges when we live grounded in a place, when we willingly chose or naturally inherit the traditions, symbols, and routines unique to a community. Binding oneself to a community, however small or large, prosperous or poor, facilitates the discovery of its “cosmos” and “multitudes”—its world, though perhaps simple on its face, is at a closer look as complex and disorienting as New York’s LED-lit cityscape at midnight.

Having lived through the horrors of the Civil War, Emerson once wrote that “place is nothing” and advised men to “advance on Chaos and the Dark.” Today, economic incentives encourage young Americans like me to think little if anything of the regions, localities, and communities that raised them. Instead, we’re assured that an immediate “advance” on bustling megacities and an embrace of the “chaos” and “dark” unfamiliarity inherent in the fabricated, unfeeling society of glass skyscrapers is the surest way to success and fulfillment. Donaldson hints at an alternative path to achievement and meaning.

Donaldson himself moved away to build a life on his own terms, but rather than explicitly instructing his readers not to do the same, he simply describes his reality: “I’ve just been lost, wallowing in the nameless nameless.” This feeling of uprootedness, of castaway status, will await many who flee from home. American novelist Wendell Berry attempted to remedy it when he moved from New York City to buy a home in Port Royal, Kentucky. Berry wrote of the move that “I knew I had not escaped Kentucky, and had never really wanted to. I was still writing about it, and had recognized that I would probably need to write about for the rest of my life. Kentucky was my fate.”

This connection to place, this rootedness, is what Donaldson describes as a “longing” so powerful that it might just be “why ghosts choose to linger.” But the longing so clearly felt by the author is an emotion felt from a comfortable life on the West Coast. In reality, it remains true that one man’s heaven is another man’s hell, and one need not strain the imagination to think of the many reasons why one might flee from home. The breadth and boundless dimensions of human cruelty and fragility are, unfortunately, often most visible in the confines of a house, in the tight social webs of a community—and in these circumstances moving away from home can be an act of survival. In the case of Donaldson’s home state today, many Kentuckians might be more sympathetic to what Harry Caudill wrote in Night Comes to the Cumberlands than they are to the longing Berry and Donaldson so clearly feel. “Here,” Caudill cried out, “the mountains were like the walls of a great jail.” Cultural decay, economic desiccation, and rampant drug addiction have made Kentucky into such a jail for many, and my own state of Ohio has fared no better. Despite this Catch-22, Donaldson avoids blind, romantic nostalgia in On Homesickness by acknowledging that he is “trapped somewhere on a bridge between the Kentucky of my mind (an idealized past) and the Kentucky I no longer know (some troubled present).”

Tricky dualities such as these exist at the cores of homesickness, nostalgia, and memory itself. “We are homesick most for the places we have never truly known,” Donaldson writes in observance of these complicated problems of place. And he is at least partially right. Our deepest held personal memories and our most prominent public histories are both often incomplete, tinted, incomprehensible with others’ accounts of the same events, personal or public. Naturally, we introduce into the past myths of our own making. “We come to think of successful species introductions, like the lilac,” Donaldson notes, “as native; they grow to be part and parcel of our bosky acres and green rivers.” Perhaps this is why our oldest, humblest beginnings, be they youthful stomping grounds or community origins, become fabled as much as they are factual. Indeed, as Donaldson writes in reflecting on his own Kentucky memories, “The stories we tell ourselves crumble if we pick at them.”

But homesickness, nostalgia, and memory shouldn’t be cast aside because they are flawed. Indeed, they can be indispensable in what Donaldson described as his “fight against the decline” in his home state. It may be true that “Kentucky fades,” but it need not fade into oblivion. In reality, each of us experiences our homes sinking further into the recesses of memory just as the distance between the past and society grows greater in a day-by-day realization of the future. These are the facts of time’s passing. What matters is how we interpret and manage the “fade” of our communities, homes, and indeed our own lives.

Recognizing that homesickness, nostalgia, and memory are only capable of providing incomplete portraits of people, places, and individuals doesn’t make us into helpless “milestones dwindling toward the horizon,” to borrow a line from Stanley Kunitz. Paradoxically, acknowledging our imperfect ability to interpret the world can empower us to engage with it more seriously. The basic pang of nostalgia, for example, can be someone’s first step toward a more significant interpretation of the past.

Donaldson’s “plea” is not the kind of poetry that Frost wrote of as beginning with a “lump in the throat.” Instead, it stands squarely at the intersection of fiction, memoir, and poetry as a crossover, an oddball book that breaks genre conventions and creates its own form. In fact, it is the unique manifestation of the author’s homesickness, his longing for that which is lost but might be discovered again. If readers accept the premise that homesickness, nostalgia, and memory can be the foundation of a fulfilling engagement with the past, they might set down Donaldson’s book and face their own feelings toward home. This is a daunting but possible challenge, to write one’s own “elegy for both place and time.”

Jacob Bruggeman recently graduated from Miami University. He is an associate editor of the Cleveland Review of Books.