A Cryptic Prophecy for the Information Age 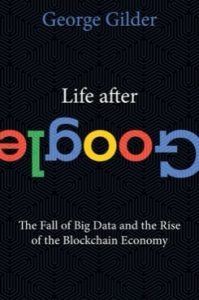 Life After Google: The Fall of Big Data and the Rise of the Blockchain Economy
by George Gilder.
Regnery, 2018.
Paperback, 256 pages, $17.

Although it seems like ages ago, there was a time when the internet was a fun and exciting place. Like the open frontier of the Wild West, the internet at the turn of the millennium was filled with potential and wonder. People could form communities, speak their minds, make transactions, create their own content, and even enjoy a fair amount of privacy.

This changed as companies like Google started taking over the internet. From the Wild West, where all dreams were possible, the internet turned into a police state in which large tech companies monitored and monetized everything. Users became the used as they were herded into “free” services that they paid for with their personal data, which in turn made Big Tech companies the middle men for all online services.

Now, the internet is clogged with ads and all data is centralized among a few massive entities. Everyone’s content is owned and poorly secured by these massive entities, and there is little recourse for those who want to stake their own claim in cyberspace. Not surprisingly, the level of innovation has slowed and users are rendered ever more passive and compliant as Big Tech tries hard to create super AI that will think and act for them.

Although the situation looks bleak, there is fortunately a bright future ahead. In Life After Google, the tech prophet George Gilder predicts that blockchain technology and the rise of the “cryptocosm” will shatter the current model. Whereas Google’s “prime rule of the Internet is ‘Communications first,’” which translates to “everything is free to be copied, moved, and mutated,” the first rule of the cryptocosm is “Security first” which translates to “safety of your own identity, your own device, and your own property.” The internet of the future will serve the individual and give him what he wants rather than making the individual serve the internet.

If this explanation seems unclear, then intrigued readers may be disappointed in the fact that Life After Google does not really make any of this any clearer. Rather than act as a primer for blockchain technology or even an argument against the current status quo of the internet, Gilder’s book is more of an open-ended exploration of different ideas and people associated with the internet. Much of it is cryptic and technical, but all of it carries huge implications for the future of the Information Age.

After making an attempt to communicate the current issues plaguing today’s internet in his first chapter, Gilder truly begins his journey by describing Google’s system of the world. This discussion takes him further back in time, as he describes the ideas of Isaac Newton, Davis Hilbert, John von Neumann, Kurt Gödel, Claude Shannon, Gregory Chaitlin, and many other prominent names in mathematics. Gilder will reference these names throughout the book, particularly when discussing “systems of the world,” a concept that combines “science and commerce, religion and philosophy, economics and epistemology.”

Google’s system of the world embraces two key concepts: collecting all data in one centralized space (euphemistically called the “cloud”) and applying an algorithm to sift through this data and analyze it. The goal of Google’s system is to develop artificial intelligence that can think and innovate for increasingly passive human beings. Already, Google has largely subdued internet users through its superior search engine and free services, though its innovation has yet to burst out of its aging “aggregate and advertise” business model.

By contrast, the cryptocosm is a peer-to-peer system that emphasizes decentralizing data through individual blockchain encryptions. This will apparently unleash a renaissance in creativity and freedom freed from the “middlemen and trusted third parties” that rule over all online transactions.

Before the reader can make sense of this revolution (which amounts to multiple levels of abstraction from reality), Gilder moves on to explain the process of centralizing data, which involves creating large centers made up of thousands upon thousands of computer processors, pushing the limits of what’s possible with microchips. At a certain point, speeding up these processors will become physically impossible: “hitting the energy wall and the light-speed barrier, the chip’s architecture will necessarily fragment into separate modules and asynchronous and more parallel structures.”

Fortunately, blockchain technology enables individual users to host and process data where they are. Instead of massive data centers, requiring gargantuan amounts of energy, data will be shared globally and form networks that can act as “open supercomputers in the sky.” This frees users from the current internet architecture, which “is top-heavy with apps that can do anything you want for free, and porous in its underlying protocols to establish identities, property rights, and other facets of the ground state of the system.”

Before reaching this exciting eventuality, which is described (but again, only partially explained) in chapter 18, Gilder digresses from his topic to discuss the current technology titans, who have grown ridiculously wealthy from algorithms and their materialist worldview: “the intellectuals of this era are simply blind to the reality of consciousness.” As such, they invest their hopes in beefing up their companies’ networks and speeding up processors to somehow produce conscious self-aware machines.

However, the newer generation of programmers and computer architects are moving in the opposite direction. Many of these people have been sponsored by another technology titan, Peter Thiel, and are the pioneers in the cryptocosm. Right now, their work is mainly known to the public through cryptocurrency—tokens of value, secured through blockchain encryption. For Gilder, cryptocurrency is much more than a Ponzi scheme; it is a manifestation of a new system of the world altogether.

For all this to work, however, the infrastructure of the internet needs to be upgraded. To that end, Gilder discusses the current regulations that hinder the progress of internet carriers while encouraging the growth of today’s Big Tech companies: “Massively favored are software and content apps [like Google, Apple, Amazon, and Facebook] over the regulated regime of conduit, manufacturing, and hardware that makes a network possible.” Because of this setup, which Gilder breaks down in some depth, advancing to a 5G network, on which blockchain innovations depend, has been slow to develop in the United States.

By the end of the book, Gilder decides to discuss new VR technology and couples this with his larger point that humanity should be at the center of technological innovation: “mind over matter, human consciousness over mechanism, real intelligence over mere algorithmic search, purposeful learning over mindless evolution, and truth over chance.” It is a beautiful thought and a welcome conclusion to an interesting journey.

Assuming one makes it to the end. Even for those well-versed in technology, it is extremely difficult to follow Gilder’s line of reasoning. Not only does he take innumerable detours and introduce heavy ideas, his use of language can be utterly idiosyncratic and inscrutable. For instance, a term like “economic growth” might lead the reader to ponder a rise in production and consumption, but for Gilder it means “Learning tested by falsifiability or possible bankruptcy.” Even the three paragraphs explaining what this means do little to dispel the thick fog of confusion that continually arises.

Despite these difficulties, Life Before Google is an important book that sheds light on what could come next, and gives hope to those wondering if there is a future beyond the dominance of Big Tech. There is such a future, but as Gilder repeatedly reiterates, it will require modern human beings to start trusting themselves again and reclaim their role as innovators and creators.