A District in Play 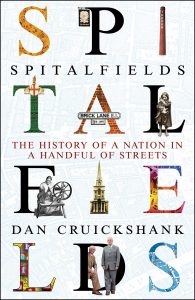 Every morning, I would be awakened by the cockerel across the road, and open the curtains to see an array of the east, each new sun lending brilliance and blue-hazed suggestiveness to eastern Middlesex and western Essex. Bow lay beyond the chanticleer’s yard—and Mile End, Bethnal Green, Hackney, Dalston, Ilford, Newham, Stepney, Plaistow, Poplar, Limehouse, Woolwich, Wanstead, Chingford, Epping Forest, and points beyond—and it was possible to imagine oneself on the verge of open country, a delusion lent pleasing credence by the hornet that shared my room that winter, a rare visitor to the likes of Spitalfields, London E.1.

The streets outside were edgy in the early 1990s—artists seeking cheap studio space and curry-seeking bond-traders jostling uneasily alongside the impoverished, often inbred locals, 95 percent of whom could trace their roots far further east, to the extent that people were nicknaming Spitalfields “Banglatown.” The great towers of the City were just hundreds of yards to the west—privately educated bankers and bumptious Cockney traders making the global economy shake two minutes’ walk from head-scarfed women who couldn’t even speak English, and would probably gladly have swapped their grim, crime-ridden council houses for the Sylhet valleys of “home.” On the western side of Bishopsgate, the great financial edifices simply stopped, looking blankly down on this exotic region as its denizens looked equally blankly up. Whenever I walked home late at night through the silent City I knew when I had entered Spitalfields, because suddenly the still partly cobbled roads were potholed, and there were pulpy fruit and vegetable effluvia from that day’s markets, prone drunks, and a smell of drains. At weekends, Petticoat Lane Market still had a few stalls (or blankets on the ground) where hopeless vendors offered stained jackets, Victorian junk, and coverless nineteenth-century books. Spitalfields seemed always unsettled, a place constantly in churn.

It was even more so in the 1960s, when architectural historian Dan Cruickshank became smitten by its menaced Georgian architecture and “Hogarthian” ambience. He has lived there since, in a 1727 house crammed with artefacts; “it pained me even to put electricity in,” he told a 2009 interviewer. He is an affable and engaging expert on, and defender of, an area that has played a oblique yet powerful part in national life. Other nostalgists have been magnetized here—in Folgate Street, Dennis Severs created what he called “a famous time machine” between 1979 and 2000, the house of the fictional Jervis family, where every room is dressed as if its eighteenthor nineteenth-century inhabitants have just stepped out for a moment, where candles flicker to “authentic” soundtracks.

Less nostalgic, but equally romantic, habitués include Gilbert and George, Jeannette Winterson, and Tracey Emin—responding intuitively to historic marginality, this tract immediately outside the London walls and so the remit of civic authorities. Spitalfields has variously or concurrently been a place to grow food, rear animals, bury bodies, dump rubbish, erect dwellings and workshops, religious houses (Spitalfields derives from the “hospital” attached to the great Augustinian Priory of St Mary), and theatres to watch stage-shows forbidden in the censorious City. It was also long a purlieu for the undesirable or unwanted; in London: A Biography, Peter Ackroyd suggests an imaginative link between “Spitalfields” and “spittle,” a wrong etymology (as he knows) that nevertheless conjures the unhygienic nature of the area.

Wealthy Romans were buried here, at this southern terminus of Ermine Street, their great highway to the North, but after they left in 410 the area slipped out of reckoning. The prestigious pagan cemetery became an un-prestigious Christian one, convenient for post-disaster burials, and then part of the lands of St Mary’s, founded circa 1197, which became renowned as both lying-in hospital and hospice. St Mary’s had problems—it ran out of money in 1303, and its canons were reprimanded for “frequenting the houses of Alice la Faleyse and Matilda, wife of Thomas”—but it also became celebrated for Easter’s “Spital Sermons,” attended by Lord Mayors and even Elizabeth I (they still occur, although now in the City). There used to be a well (likely a holy one) under the altar of St Mary’s, the precise spot of which is marked by a Thames Water manhole and watercock.

Ralph Aggas’s 1560 London map shows Spitalfields as a rustic retreat, but by the 1570s, John Stow witnessed literal upheaval, with large numbers of Roman cinerary urns and stone coffins being unearthed among “filthy cottages.” The area was leased partly to the “Fraternyte or Guylde of Artyllary of longbows, Crossebowes and handegonnes” in 1537, and military use continued until 1682. Grander occupants included Sir Thomas Wyatt and Edward de Vere, Earl of Oxford (sometimes believed to be “the real Shakespeare”). The real Shakespeare probably did lodge here, and certainly acted in James Burbage’s Theatre in Spitalfields, London’s first purpose-built theatre since Roman times; maybe his earliest plays were premiered there. Edward Alleyn, Ben Jonson, Christopher Marlowe, and John Webster also came and went, Marlowe’s proximity to Sir Francis Walsingham’s residence feeding rumors he was a spy.

Intrigue was inevitable in an area that was home to Catholic ambassadors and the missionary Doña Luisa de Carvajal y Mendoza, arrested in 1613 for turning her accommodation into a nunnery and repository for relics. Three years later, Sir Francis Bacon lodged next door, where he alternately arranged matters of state and pondered the astral plane. Other occultly inclined residents would include the herbalist Nicholas Culpeper, and John Heydon, who contrived to be imprisoned by the Commonwealth and Charles II. It is ironic, yet inevitable, that so visionary a district would become refuge for dissenting Protestants like Samuel Annesley, grandfather to the Wesleys. Calvinist Huguenots settled after 1685, importing skills that made Spitalfields silk famous. Some built elegant houses and churches, a few of which survive, probably raised on recent plague pits, in scenes evoked by Daniel Defoe’s 1722 documentary-novel Journal of the Plague Year—“some of [the bodies] remaining so plain to be seen that the women’s skulls were distinguished by their long hair, and of others the flesh was not quite perished.”

Spitalfields slid, like the rest of the East End—becoming a locus of crime, insalubrious industries, poverty, and prostitution (Jack the Ripper was a later haunter of these streets). As the Huguenots moved on, Jewish refugees moved in, turning churches into synagogues, dominating Spitalfields’ southernmost fringes until the arrival of the Bengalis, who promptly turned some synagogues into mosques. Spitalfields is still in play, as post-Christian developers and gentrifiers price many Bengalis out, some of the churches-synagogues-mosques now turned to serve Mammon. While some buildings are now protected, others and yet-lingering local distinctiveness are still at risk of being homogenized out of recognition. If this off-center epitome of England is saved, it will be partly due to Dan Cruickshank’s decades of advocacy, brought together and summarized in this topographical tour-de-force.

Derek Turner is the author of the novels A Modern Journey, Displacement, and Sea Changes. His website is derek-turner.com.