A Gimlet Eye Beneath a Chapel Veil 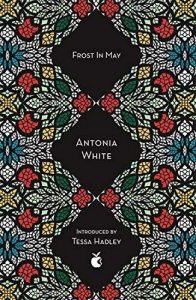 “We work to-day to turn out, not accomplished young women, nor agreeable wives, but soldiers of Christ, accustomed to hardship and ridicule and ingratitude.”

These words express the mission of the Convent of the Five Wounds, where nine-year-old Nanda Grey is sent shortly before World War I. Nanda, the daughter of a recent convert to Catholicism, plunges eagerly into the world of the Five Wounds—a world where the only storybooks allowed are martyrs’ lives (“the pressing to death of the Blessed Margaret Clitheroe had nearly turned her sturdy stomach”), and the pupils do penances so God will make them victorious against their hockey rivals.

Frost in May, Antonia White’s novel drawing on her own convent education in the years leading up to World War I, layers satire, anguish, and tenderness with exceptional delicacy. The school novel is always a novel of the gap between what’s taught and what’s learned. The faith of the Convent of the Five Wounds is sentimental, it’s cruel, it turns truths into propaganda and breaks children’s spirits in the name of humility. And yet it’s also beautiful. In one paragraph we learn that their letters home are censored, and “Occasionally a letter that was considered particularly stupid or objectionable in tone was read to the whole school and publicly criticised.” In the next, we see the girls “strewing rose and peony petals from silver baskets” in a Eucharistic procession. Their devotions are encrusted with sentiment like an over-gargoyled church: “The donkeys in the paddock reminded her that all donkeys have crosses on their backs since the day Our Lord rode into Jerusalem; the robin’s breast was red because one of his ancestors had splashed his feathers with the Precious Blood trying to peck away the thorns.” Their exposure to contemporary social questions is defined by a priest’s comment: “Our Lady had no vote and did not want one.” Nanda tries to mortify her flesh by salting her dessert; when a girl drops her bread and jam in the dirt, it’s the occasion for a lesson in humility for whichever pious girl will eat the fouled treat.

Nanda confesses that she has made a “rash vow”:

“And what was this vow, my child?”

“And how old were you when you made this vow?”

The comedy of these moments comes from the mismatch between the great spiritual aspirations and the tiny results. And yet the littleness that makes these events ridiculous also suffuses them with nostalgic love.

As Nanda grows from trusting child into longing adolescent, the faith of the Five Wounds begins to tighten around her. She notices how the charity pupil is humiliated: “Her seat was always the worst in every class, and she was grudged her very pencils and india-rubbers.” She develops a crush on the Protestant girl Clare: “Clare’s touch embarrassed and delighted her; it gave her the queerest shivering sensation in the roof of her mouth.” She befriends girls from aristocratic old Catholic families, exotics like Léonie, who has “a copy of Candide bound up as a missal,” who take their religion with a cavalier assurance that Nanda the sincere and resolute convert can never muster.

Frost is more than an attempt to #ExposeConventSchools, though it may hit home for readers raised in a self-consciously conservative Catholic atmosphere. It’s something sadder: a tribute to the Catholic faith as one girl learned it, to the joys and beauties that are eventually overwhelmed by self-assured and punitive rigidities. It’s a depiction of what it’s like to believe, and yet to feel that God ruins everything. A disastrous Dante play foreshadows Nanda’s own downfall. All the previous beloved, ridiculous microcosms of holiness are leading up to a terrible microcosm of damnation: a small adolescent catastrophe at which it’s impossible to laugh.

The terrible climax of Frost in May is taken directly from White’s own life; it permanently damaged her relationship with her beloved father, and she was not able to complete the novel until after his death. When she wrote Frost, published in 1933, she had left the Catholic Church. That won’t surprise any reader. And yet it also won’t surprise them that she returned.

White found fiction psychologically grueling, and despite always intending to write more, she managed only a sheaf of short stories, a play, and an autobiographical trilogy. Most of these works were reissued by Virago as “Modern Classics,” along with her epistolary account of her departure from and return to the Catholic faith, The Hound and the Falcon. White moved in the artistic circles of the 1930s (her first attempt to explain her reversion to Catholicism was cast as an open letter to Cyril Connolly) and her short stories burrow deep within unhappy or disturbed psyches. Their symbolism is at once blunt and dreamlike: a woman who can’t recognize her own husband when he’s swathed in bandages after an accident; an inn where an unhappy wife is given a passionflower and a sea spider. In “Surprise Visit,” a woman who spent “most of her twenty-third year” in Bethlem Royal Hospital—a mental hospital, and the origin of the word “bedlam”—goes back, after the hospital has been turned into the Imperial War Museum, and becomes trapped in her own past. White was herself a Bethlem inmate after a mental breakdown following the dissolution of her first marriage, and really visited the museum her asylum became. She describes her reaction brassily in a letter (“I’ve seen my old cell with a case of shells in it and a radiator which we lunatics would have greatly appreciated!”) but the short story, in which the narrator succumbs to the full force of institutional power on the psyche, suggests the depth of the fears White was facing down.

In the autobiographical trilogy (The Lost Traveller, The Sugar House, Beyond the Glass) the final volume is by far the best, and can perhaps be read in isolation. The first two books describe the late adolescence and disastrous first marriage of a girl now called Clara Batchelor, but not noticeably distinct from Nanda Grey. Clara’s husband, a childlike veteran, quickly descends into alcoholism (one of White’s psychological acuities is the pattern by which everyone in Clara’s family seems to love alcoholics) and Clara descends into near-catatonic depression, before beginning the dual ordeal of both civil and church annulment. And here Beyond the Glass begins: single-ish, but still legally married, Clara tries to rejoin ordinary life. She meets a man. She feels a mysterious connection. It is as if they can hear one another’s thoughts; they can predict the future …

Beyond the Glass is a brilliant use of genre-switching as well as a compelling page-turner. White guides the reader with light, gradual steps through romance, into supernatural suspense, then to a portrait of mental breakdown. Clara ends up hallucinating in “Bedlam” but White, strikingly, doesn’t entirely reject the romantic and even the supernatural explanations for some parts of her experience. Through Clara’s visions and despair White gives a precise depiction of life in the hospital. We are totally within Clara’s reality as she imagines herself transformed into a horse, as she experiences the agonizing distortion of time, and yet we also recognize some of these visions as responses to the incomprehensible, dehumanizing treatments she endures, the force-feeding and the physical restraints. Beyond the Glass is an experimental novel because the experience of a single woman’s soul encountering the institutional edifice of the asylum is itself a clash of genres—the patient is living in a world incomprehensible within the terms of the hospital. The formal strangeness of the novel, its surrealism, is its realism.

Antonia White returned to her faith during World War II, in halting, furtive movements, reverting almost behind her own back. She later published letters she exchanged during that time with a married man who wrote to her after reading Frost in May, in which they engage in a naive or disingenuous epistolary romance played out through discussions of faith. We only have her side of the correspondence; she’s at once mature and flighty, intellectually daring yet always alive to the limits of human understanding. Her criticisms of Catholic intellectual and spiritual pride are as true today as they were when she made them.

Institutional novels are always philosophical—the institution is a living philosophy, a home made out of doctrine. And White’s greatest novels, Frost in May and Beyond the Glass, are institutional novels of extraordinary acuity and poignancy. Her reversion letters may seem like the account of a philosophical return to an all-encompassing institution—and yet the Catholicism White returns to is experimental, humbled, pervaded by awareness of all that’s unknowable. She wears her surrender very lightly.

The heroines of White’s fiction, those rippling reflections of her own life, make their way in a world where Catholicism is beautiful and cruel, exotic and sentimental, willfully stupid and hauntingly otherworldly. These are women who have to earn their keep; for whom the nature of the world and of their own soul is never obvious. Across the chasm of a century, after Vatican II and the Cold War and the replacement of Freudianism with cognitive behavioral therapy, what’s startling is how recognizable Antonia White’s world remains.