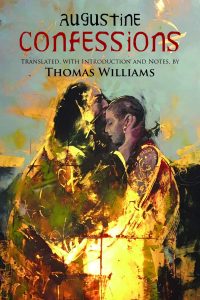 Thomas Williams spends a decent chunk of the introduction to his new translation of St. Augustine’s Confessions justifying its existence. What can yet another translation hope to provide? Did Augustine steal more pears since the last one?

Last year I read Sarah Ruden’s 2017 translation, and re-read the limpid F. J. Sheed translation that first introduced me to Augustine. Of these three the Williams is the one I’d hand to an Augustine newcomer. In both its lyrical prose and its excellent, spiritually rich apparatus you can feel Williams’s teaching experience (he is a professor at the University of South Florida). A disclaimer: I don’t read Latin. I can only judge how useful a Confessions is to the barbarian. But Williams translates with great love for the barbarians.

Williams the teacher drops a delightful footnote contrasting the use of the term “son of Adam” in the Confessions and in the Narnia books. He leans on the resources of his own Anglican church to make his translation “formal without being stilted or archaic,” to give it beauty and resonance—and a whiff of incense so we don’t forget why we’re here.

Perhaps the most teacherly aspect of his translation is his emphasis on the structure of Augustine’s work. As he writes in the introduction, the autobiographical books of the Confessions make a whole with “a first half of progressive disintegration, a second half of progressive reintegration”—the first initiated by Augustine and the second by God. Williams cites even seemingly small details to make this structure visible, like the near-absence of personal names in the first half and the sudden “flood” of names in the second: “His use of proper names is meant to reinforce this connection between the disintegration and reintegration of his soul and the disintegration and reintegration of his human relationships.” Williams’s discussion of the way the “three lusts” of 1 John 2:16 organize the autobiographical books, his discussion of passages that mirror one another, and his emphasis on the role of “fragmentation and reintegration” all the way through the final three books all serve to help the reader organize Augustine’s writing and see a complete narrative, rather than a memoir followed by three weird discourses on eternity and what whales mean.

Williams refuses to single out scriptural references with italics or quotation marks. Instead he keeps a running list of references in the margins, allowing readers to see how thoroughly Scripture shapes Augustine’s language and imagination, as well as noting where Augustine becomes more or less insistently scriptural. Williams footnotes only those places where Augustine’s translations of the Bible would differ from those with which readers are likely to be familiar.

Throughout the text Williams offers footnotes connecting the Confessions to the liturgical language of Augustine’s time (and often our own), and to other writing by Augustine. He has a section of “Essential Scriptures,” and appendices with important psalms and Augustine’s comments on the Confessions in his later Retractationes. It’s just all so flamboyantly helpful!

Williams is more colloquial and monosyllabic than Sheed (for example, “always at work, always at rest” vs. “ever in action, ever at rest”), and much more concerned with clarity and flow than Ruden, who seemed to me to sacrifice these qualities too often in order to attain a more “folksy,” “jagged and convoluted,” allusive, self-deprecating, and even jokey tone. Ruden gives us the shock of Augustine’s frankness (“I cheated on you like a true slut,” vs. Williams’s “I was unfaithful to you”; Ruden’s “the cut of your whip” vs. Williams’s “the bitterness of your chastisement”), his urgency and the complexity of his language. Sheed gives a bookish, gentle lyricism. Williams works to make Augustine both intelligible and lovable.

The only place where I find myself in definite disagreement with Williams’s judgment is his dispute with Sarah Ruden over the translation of dominus, for God, as “Lord” rather than “Master.” This choice corresponds to Ruden’s use of “slave” where Williams often uses e.g. “in service” or “serving.” Williams argues, “[I]t seems impossible to me that [Augustine’s] thoughts about God were so narrowly anthropomorphic, that his God was the same sort of chap as Augustine himself, just with a rather larger household.… I am convinced that when he addressed God as dominus he had very much the same thing in mind that present-day Christians have when they address God as ‘Lord.’”

But we don’t have lords now; the word, for Americans at least, has been totally handed over to religion and separated from terms of political power. Surely it makes some difference when the words you use for earthly hierarchies are the exact same as the ones you use for God. Such correspondences can be used to reinforce political hierarchies or criticize them, but they can’t simply pass through prayer without leaving a trace on the mind. Unlike Williams’s careful choices in gendered language (feminine pronouns wherever Augustine used them, including for his own soul and for “the Incarnate Word as Wisdom”; masculine elsewhere), this choice seems to obscure the ways in which Augustine’s imagination was not our own. It also, as Ruden notes, takes the edge off Augustine’s description of himself as God’s slave. Ruden draws out the theological meaning of this language that Williams’s choices obscure.