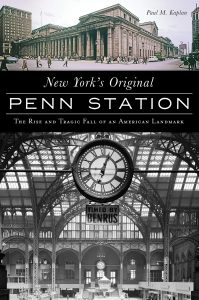 The original Penn Station, which opened in 1910 and was torn down for the current Madison Square Garden in 1963, is popularly remembered as one of the greatest buildings in New York City’s history—thoughtlessly destroyed to make room for an ugly modern high-rise and a hideous train station. Its architecture, inspired by Rome’s Baths of Caracalla, has been praised by architects and critics like Ada Louise Huxtable, Lewis Mumford, Norval White, Elliot Willensky, Paul Goldberger, and Michael Kimmelman. As the current station continues to be overwhelmed by daily crowds of commuters on New Jersey Transit and Long Island Railroad trains (at least until the COVID-19 pandemic), its status as an aging, dismal environment has provided a stark contrast to the glorious and wonderful light-filled station that once served as New York’s propylaea.

The original station continues to loom large in popular culture. The PBS documentary series American Experience dedicated a show to it and at least a half-dozen non-fiction books have been published on it in the twenty-first century. It has also been featured prominently in books about lost landmarks or train stations and has served as a setting for novels and plays. Perhaps the most striking example of its enduring legacy is that, as the current station and the buildings now atop it continue to age and grow inadequate to their uses, several individuals and groups, including the late Senator Daniel Patrick Moynihan and the National Civic Art Society, have called for rebuilding it.

This idea, which backers estimate would cost up to $3.5 billion (not including the cost of relocating Madison Square Garden or demolishing or cladding Two Penn Plaza), has not attracted much attention from New York’s movers and shakers to date, but perhaps they should reconsider in light of the planned total rebuild and restoration of Notre Dame de Paris. According to the advocacy site Rebuild Penn Station, the project would “Right a historic wrong,” while Marlo Safi writes in National Review that “Perhaps it’s time for New York City to prove that within its concrete jungle is a second chance, a rectified mistake, a sign of forgiveness and opportunity in a dog-eat-dog world that can be callous and harsh.”

Unfortunately, the awkwardly titled New York’s Original Penn Station: The Rise and Tragic Fall of an American Landmark includes too few photographs to fully give one an idea of what the station was like—most of the better ones were taken by Norman McGrath while the station was being demolished and consequently are focused on the architecture and not people using the station. To make matters worse, author Paul M. Kaplan’s prose is not quite up to the task of describing what it was that made Penn Station so great; instead he falls back on repeatedly telling the reader that the station was grand, beautiful, or magnificent. But he never shows us why that was the case. It is a sadly clunky book that, despite its short length of 160 or so pages, still manages to sound like the author was running out of material and made up for it with repetition and awkward, passive sentences.

There are other issues. Towards the end of the book, Kaplan writes of the court case Penn Central Transportation Co. v. New York City, where the railroad challenged New York’s historic preservation and landmarking ordinance because the railroad wanted to tear down Grand Central Station. The case went all the way to the United States Supreme Court, which ruled in the City’s favor, paving the way for historic preservation and reuse. Kaplan tells us the outcome of the case several times in the two pages he devotes to it.

It’s true that the Penn Central case is an, ahem, landmark decision of the Supreme Court. Most sources explain that New York’s landmarking ordinance and the Landmark Preservation Commission (to say nothing of the historic preservation movement itself) were spurred by the failure to save Penn Station from the wrecking ball. Kaplan makes this account more confused than it needs to have been. According to Kaplan, Mayor Robert F. Wagner’s efforts to save the station were half-hearted and the Preservation Commission was established days before the station was demolished.

The demolition and redevelopment of the station didn’t reverse the fortunes of the Pennsylvania Railroad. It merged with the New York Central in a deal that might have made sense back when J. P. Morgan was alive, but by 1968 the NY Central was also losing money hand over fist and was heavily in debt. To make matters worse, the long-time rivals had separate corporate cultures and organizations, with workers represented by different unions under different contracts. The 1970 Penn Central bankruptcy was the largest in American history until Enron went under.

In the meantime, they decided to sell off the air rights to Grand Central Station, which would have resulted in its demolition, or the erection of a Marcel Breuer slab atop it. But the Landmarks Commission and the public, including Jacqueline Kennedy Onassis, filed suit and won, establishing that historic preservation does not constitute an emininent domain taking of property. Again, this interesting material barely makes it into Kaplan’s book, although in this case the omission is more understandable for a book primarily concerned with Penn Station and its legacy.

One good decision Kaplan makes in the format of the book is the use of sidebars to tell related stories, such as Edith Wharton’s dim view of New York’s architecture and the scandalous life and death of architect Stanford White. While Kaplan’s prose fails to convey the qualities of Penn Station that made its destruction such a loss, it avoids hagiography by being frank and honest about its flaws. Thanks to the location of the station in Manhattan and the depth at which the tunnels under the Hudson were dug there were several steep staircases from the train platforms to the main waiting rooms. Grand Central Station solved similar problems by using ramps, but Penn Station architects McKim, Mead, and White refused to compromise their design with practicality. The railroad also sabotaged itself by failing to anticipate the importance of commuter traffic, which left the Long Island Railroad using a different entrance, a different ticket office, and smaller platforms that became increasingly inadequate as the Long Island suburbs developed.

Even worse, the station’s design and the executives’ insistence that they were a railroad and not a real estate company resulted in a building that, despite its size and prominence, didn’t generate enough revenue to cover its substantial maintenance costs. The situation only grew worse as long distance rail travel declined in popularity. While Kaplan focuses on air travel as more of a competitor for the Pennsylvania Railroad than cars, his overview of the problems facing the rail industry after World War II is thorough without distracting from the point of the book.

Again, it’s difficult from this work to get a sense of how Penn Station earned its reputation. Its scale is hard to comprehend, especially given the lack of people in most photographs. It covered nine acres, while Grand Central covers about 2.2, Boston’s South Station a half-acre, and Philadelphia’s 30th Street Station about five. Moreover, to judge from other McKim, Mead, and White buildings, such as the Boston Public Library, much of what distinguished their work were intricate details that reward a close inspection, while resolving and not overwhelming or distracting a viewer from outside. These details and proportions are largely lost in the photographs; Norman McGrath’s picture of the main concourse on page 135 comes closest to a full portrayal, though even here the sense of scale is lost.

But demolition may have spared Penn Station from worse fates. Unlike the Vanderbilts’ Grand Central Terminal, surmounted by a sculpture entitled The Glory of Commerce and built with one eye on the balance sheet, the failure of PRR executives to appreciate the value of real estate and commuting had probably doomed Penn Station anyway. Grand Central could accommodate the MetLife Building, while the area over its tracks became Terminal City, one of the world’s most valuable real estate developments, with new offices helping to funnel tens of thousands of commuters a day through the station. Penn Station never spurred that kind of development in its vicinity and could have never accommodated air rights development without ruining the station.

Indeed, it’s difficult to imagine an old Penn Station that is both more comfortable for commuters and still the place New Yorkers remember it as. The many stairways would have been supplemented with cheap ramps to grudgingly comply with the Americans With Disabilities Act; the concourses and waiting rooms would be cluttered with free-standing fast food stalls; the noise of fryers, coffee machines, grills, and innumerable televisions would echo from marble to travertine and glass to produce a bewildering cacophony. Like every other building in the city, the exterior would be perpetually shrouded in scaffolding and frayed plastic advertisements for Broadway shows. Even worse, the lure of air rights development would doubtless have grown too great and one of McKim, Mead, and White’s unworthy heirs would have used their CAD programs to add some glass excresence to the station, like Zaha Hadid’s “addition” to the Antwerp Port Authority Building or Daniel Liebskind’s addition to the Dresden Military History Museum. No, it was better for Achilles to win everlasting fame and die, than to suffer such indignities as only we can contrive in his old age.

Perhaps in the end the real tragedy of Penn Station is that it might have been impossible to save at all. Current efforts to rebuild it have the opportunity to learn from what was valuable and beautiful about the station, and avoid its mistakes.