A Life in Liberal Internationalism 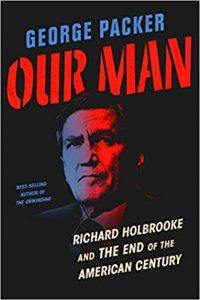 Our Man: Richard Holbrooke and the End of the American Century
by George Packer.
Knopf, 2019.
Hardcover, 608 pages, $30.

Packer, a former member of the Democratic Socialists of America, favors a robust and interventionist American foreign policy but only in the service of democratic and humanitarian ends. This puts him at odds with those on the far left who view America as a source of evil in the world, and foreign policy realists who emphasize the limits of American power.

Perhaps the most revealing example of this neo-Wilsonian approach to foreign policy is Packer’s judgment that Holbrooke’s accomplishment in the Balkans during the Clinton administration, capped off by the Dayton Accords, is America’s greatest diplomatic achievement of the post-Cold War world. To believe that you have to believe, as Packer writes, that, “Perhaps ongoing slaughter in a small far-off place could actually harm America’s interests. Perhaps the United States had to learn to use force in a limited way, and to rebuild broken countries. Perhaps that was being pragmatic.”

Yet even Packer admits that the end of the Balkan War “came much too late for the living and the dead. The peace was … unjust. What the Serbs gained by murder they were allowed to keep by agreement.”

But even more fundamentally, what concrete vital American interest was at stake in the Balkans in the 1990s? It was a humanitarian intervention plain and simple. Foreign policy is not supposed to be about statesmen feeling good about themselves because of their benevolent intentions and emotional sentiments. U.S. policymakers are charged with acting on behalf of the interests of their citizens and country, not fixing the problems of the world. Some of our earliest and best statesmen—like George Washington and John Quincy Adams—understood this.

Packer sees Holbrooke as perhaps the last link with the liberal internationalist foreign policy approach of FDR, Truman, Kennedy, and Johnson, and as a successor to the Democratic “wise men” of the post-World War II era—Averell Harriman, George Kennan, Dean Acheson, Clark Clifford, Dean Rusk, Robert Komer. These “wise men” were not without accomplishments, but their (Kennan excepted) liberal internationalism also brought Soviet power to the heart of Europe, did nothing to prevent the communist conquest of China, fought to an inconclusive and costly draw in Korea, and lost the war in Southeast Asia. More recently, it was liberal internationalism—as practiced by the George W. Bush administration—that produced the quagmires of Iraq and Afghanistan.

Packer has little good to say about Republican administrations during that same time period, yet Eisenhower ended the Korean War and used U.S. nuclear superiority to deter Soviet and Chinese adventurism; Nixon ended the Vietnam War, used a nuclear alert to deter Soviet intervention in the Middle East during the Yom Kippur War, and brilliantly exploited the Sino-Soviet rift to America’s geopolitical benefit; Reagan won the Cold War; and George H. W. Bush skillfully managed the collapse of the Soviet Union and fought a brief and relatively “cheap” war to prevent Iraq from gaining control of the oil resources of the Persian Gulf region.

Richard Holbrooke was a doer. He believed that if there was a problem in the world, America should try to solve it, and he knew best how to solve it. He began his diplomatic journey in South Vietnam as a young Foreign Service officer. “He had read Hemingway and Crane and he wanted to see a war, to find out what war was and who he would be in it,” explains Packer. What he experienced was the Kennedy-Johnson administrations’ hubris that they could wage war without trying to win it by using military power to gradually escalate the conflict, and, conversely, attempting to buy-off the North Vietnamese communists with New Deal-type programs. Yet Packer mostly blames the U.S. military and the corrupt South Vietnamese governments for America’s failure in Southeast Asia.

Holbrooke, Packer writes, wanted to be an “action intellectual” like National Security Adviser McGeorge Bundy. Holbrooke worked in the rural countryside of South Vietnam, observed the Strategic Hamlets program to win over the hearts and minds of the people, and became a political officer. He met Anthony Lake there, who would become his friend and later his enemy in Washington. That would become a recurring pattern with many people during Holbrooke’s career.

He also married his first wife in Saigon. Larrine “Litty” Sullivan and Holbrooke met at Brown University. She followed him to Vietnam and dutifully fulfilled the role of wife of a Foreign Service officer. Packer writes that Holbrooke was a man who needed women, but on his terms. Monogamy was not one of his strong suits; he didn’t try very hard at it. That, too, is a recurring pattern throughout his life. Packer refrains from judging Holbrooke too harshly on this aspect of his life. He appears to take for granted that high-powered, ambitious political types will pursue lovers as they do high-level government positions.

It was also in Vietnam that Holbrooke began cozying-up to journalists and leaking information to them that often undermined colleagues and promoted Richard Holbrooke. His friends and colleagues lost trust in him. His ambition repeatedly clouded his judgment. This, too, became a recurring pattern of Holbrooke’s public service.

In 1966, Holbrooke left Vietnam to work in Washington on the “pacification” program being run by Robert Komer. Holbrooke rubbed shoulders with Washington power brokers—diplomats, journalists, politicians. He made himself, Packer writes, “attractive to powerful people,” and entered the “seamless Washington blend of careerism and social life.” He played tennis with Maxwell Taylor and Bobby and Ethel Kennedy. He attended dinners and parties hosted by Katherine Graham and the Alsop brothers. He conversed with Dean Acheson. He became friends with, and later a houseguest of, Averell and Pamela Harriman.

Holbrooke authored a memo on Vietnam for President Johnson. Packer calls it the “best piece of writing on Vietnam by an American official.” Holbrooke explained that North Vietnam could not defeat the American military but could undermine the American public’s will to persevere. He suggested what would later be called “Vietnamization” of the war, and advised the President to halt the bombing of North Vietnam to encourage negotiations. The “hawks” in the administration felt betrayed, and even more so when they learned that Holbrooke had been leaking information to the Washington Post to undermine the hawks’ position.

After the shock of the Tet offensive, the Democratic “wise men” quit supporting the war. Liberal internationalism had received its first and deadliest wound. It never really recovered. Though Packer won’t say it, liberal internationalism died of self-inflicted wounds and thereafter the national Democratic Party leadership, with a few notable exceptions, sat out the end of the Cold War.

When Nixon won the presidency, Holbrooke left government and went into opposition. Vietnam had wrecked the postwar foreign policy consensus. Holbrooke became the managing editor of Foreign Policy. He opened its pages to critics of the Nixon administration—critics who, like him, waited for the next Democratic president to seek his counsel or, better still, to appoint him to high office. He also ended his first marriage and a long friendship by having an affair with his friend Anthony Lake’s wife.

Packer notes that Holbrooke wanted more than anything else to be the next Henry Kissinger. Yet, Holbrooke being Holbrooke, he privately called Kissinger cynical, dishonest, amoral, and overrated. Kissinger, for his part, according to Packer, called Holbrooke the “most viperous character” in Washington, D.C.

Holbrooke served in President Carter’s State Department, focusing on East Asian and Pacific affairs. During the Reagan-Bush years, Holbrooke worked on Wall Street and ghost wrote Clark Clifford’s memoirs. In the Clinton administration he served as Ambassador to Germany, Assistant Secretary of State for European and Eurasian Affairs, special envoy to the Balkans, and UN Ambassador. Under President Obama, Holbrooke served as special envoy to Afghanistan and Pakistan. He never attained the office he wanted and lobbied intensely for—Secretary of State.

His jobs changed but Holbrooke remained the same—self-absorbed, arrogant, exceedingly ambitious, and untrustworthy. He made more enemies. He lost more friends. He continued having adulterous affairs. He continued to leak to friendly journalists—mostly to place himself in a better light. In his memoirs, he even falsified his role in an incident in the Balkans to make himself a hero.

Packer, a gifted writer, points out all of Holbrooke’s character flaws and failings, but he cannot disown him. For Packer, Holbrooke was the successor to Kennan, Clifford, Acheson, and Harriman. He senses that liberal internationalism died with Holbrooke (who died in December 2010).

Packer concludes the book on a personal note: “I still can’t get his voice out of my head,” he writes. “One day I know it will start to fade, along with his memory, along with the idea of a life lived as if the world needed an American hand to help set things right.” That is the essence of liberal internationalism: America using its power and influence, and sacrificing the lives of its young men and women, to “set things right” in the world. Woodrow Wilson’s discredited dream lives on in the pen of George Packer.

Francis P. Sempa is the author of books including Geopolitics: From the Cold War to the 21st Century. He is an attorney and an adjunct professor of political science at Wilkes University.