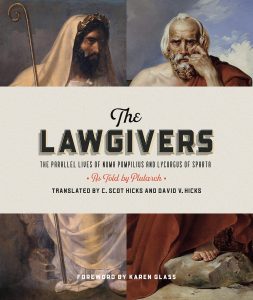 Plutarch’s Lives is one of the most illuminating works written in antiquity. The structure itself is noteworthy: chapter-length profiles of prominent leaders whose lives have striking parallels and who are presented as pairs—a Greek with a Roman, and so on—followed by a chapter of Plutarch’s comparative assessment of their virtues, vices, and statecraft. You can read Plutarch’s text as historiography, political theory, or moral philosophy and still not exhaust the possibilities for its meaningfulness. Plutarch famously tells us that he wrote lives, not histories, which is to say that he is most interested in presenting the souls of various statesman as models or warnings for our own lives, whether we are statesmen or teachers, philosophers or farmers.

Given that Plutarch was deeply influential in the thinking and writing of figures as diverse as Shakespeare and Nietzche, it is notable (and perhaps depressing) how little known and studied are his works in contemporary education. In this new translation, educators C. Scot Hicks and David V. Hicks seek to introduce Plutarch to us as a friend and mentor. The translators describe Plutarch as “a gentleman farmer-teacher-priest writing in Greek and living far from Rome in a small village in the Greek countryside.” They note that it is perhaps surprising that a man of such modest living should have such an outsized influence in history. And indeed this is a man who once proclaimed that “I live in a small city, and I prefer to dwell there that it may not become smaller still.” And yet the translators promise that this modest man can provide us with “a provocative way to think about politics and religion in our own modern world.”

To help focus our encounter with Plutarch, the translators select just two statesmen—Lycurgus of Sparta and Numa of Rome, and present them to us thematically as lawgivers. We are asked to think of law in the broadest sense possible, as a medium “not merely to settle the competing claims of individuals or groups, but to establish an identity and form the character of a people.” This approach to law sees it as a vehicle of culture, as the fundamental metaphysics governing the public and private lives of citizens in a republic. As the translators observe, “the culture of a people grows out of its laws” as well as “the processes whereby their laws are passed on, studied, interpreted, revised, internalized, and enforced.” This insight dovetails perfectly with Plutarch’s own understanding of culture. In one of the key metaphors of his text, Plutarch recounts how Lycurgus sailed from Crete to Asia and “there, like a doctor who compares healthy bodies with wounded and diseased ones … Lycurgus intended to compare the Cretan way of life and form of government, so simple and severe, to that of the Ionians, so extravagant and permissive.” The translators suggest that comparing our own institutions and laws to those profiled by Plutarch is itself a participation in this pursuit of a healthy politics.

The Lawgivers presents one of the central paradoxes in the classical tradition of political theory. The man who desires to be king is by that desire shown unfit for kingship, but how does one convince the virtuous philosopher—the person best suited to rule—to participate in public affairs? This tension is communicated vividly in the Life of Numa. When we first encounter Numa, he has “abandoned city life and moved to the country” in order to take “long solitary walks through the forests and meadows and remote places consecrated to the gods.” Plutarch assures us that Numa did not leave human society out of any grief, but rather “because he had found a more hallowed society.” It is only out of a sense of piety that Numa is reluctantly convinced to lead Rome, giving up a life devoted to “tranquility and the study of impractical things” in order to make use of the talents the gods have blessed him with in service to justice.

The phrase “a more hallowed society”—a masterful translation choice—continues to echo in my ears. Numa is known for his piety, and while there is always a question of civil religion as a social utility versus genuine belief for its own sake, I think this account of Numa reminds us of a central truth: our political ends need to be shaped by transcendent horizons of meaning.

This summer, I attended a lecture by Arthur Brooks, the former president of a think-tank in DC, and I fully expected to hear him speak about policy: instead, he spoke about love. Dr. Brooks told us that policy can only do 5 percent of the work: the other 95 percent is the work of each of us loving our families, our neighbors, our coworkers, our friends. I think that this work of love is easier when we commune in the consecrated places, when we tarry long in the meadows, and seek out that “more hallowed society” that in the Christian tradition is known as the City of God. And I think that Augustine is right: when we properly order ourselves toward the City of God, our earthly cities flourish too. Similarly, Plutarch tells us that Rome flourished under the reign of Numa, as did the cities surrounding it. He writes: “as if carried on a gentle and salubrious breeze blowing from Rome, all the cities round about seemed to participate in a general longing for good government and the arts of peace, content to stay at home and farm their lands, raise their children, and worship their gods.”

The role of piety in the life of a statesman that I briefly sketched above is just one of a myriad of themes that can be traced through Plutarch’s work. And this accessible yet poetic translation invites us to ruminate on these ideas as a way of forming our own souls. Given the stated intent of Plutarch in writing lives-not-histories, and given the pedagogical nature of law, I can think of no better introduction to Plutarch than The Lawgivers. I know that it is a translation that I will return to, and I can imagine many high school students falling in love with Plutarch through this text.

A final word on the key features of this translation: In their introduction to the text—as likely to be of aid to teachers as to students—the translators contextualize Plutarch’s writing in the classical tradition of rhetoric as well as the Platonist school of philosophy. Throughout the translation they include notes drawing further parallels between Plutarch and Plato (and other writers), in addition to explaining to the reader unfamiliar features of Spartan or Roman culture. The introduction also serves as an accessible primer on how to read history, including how to ask the normative questions regarding historiography, such as “what are the sources for this claim” and “what is the author’s potential bias?” The translators advise the reader to look for Plutarch’s raised eyebrow—that is, the places where he subtly includes mirth or judgment. They note that “you will be rewarded in your search for these small gestures of his skepticism and disapproval.” Finally, and of equal importance is the translators’ advice on how to try to understand the past on its own terms rather than judging against the standards of our own day. If we can learn this final piece, we will be better historians; more importantly, we will have a greater capacity to balance love and judgment as regards our own world and our very selves.