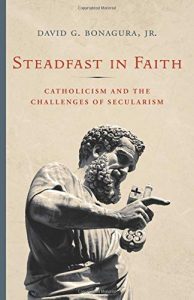 “When the Son of man comes, will he find faith on earth?” This question, asked by Jesus and recorded in Luke 18:8, is one of the most ominous sentences in the New Testament. That the question goes unanswered is perhaps even more chilling. Is Jesus suggesting the possibility of a time when the Christian religion might be so sparse that genuine faith is indeed extinct? Such a scenario seems remote—almost one-third of the world identifies as Christian. Yet the faith is largely gone from some its most ancient and hallowed lands: few of the faithful remain in the Levant where Jesus walked, or in the North Africa of Augustine and Athanasius, or in the heartland of the once-mighty Byzantine Empire. Most of the historic churches of Europe are also in decline, if not on life-support. Even in the United States, once a bastion of piety and religious freedom, we are witnessing a dramatic increase in the number of those who identity with no religious tradition.

Of course, many will counter that Christianity is experiencing profound growth across Africa and Asia. Yet who is to say that the Global South will not suffer under those same secular, materialist, and pluralist forces that have decimated the faith in the West? Moreover, even where there are many Christians, cancerous forces within can sometimes wreak just as much havoc as external enemies, as the scandalous episode of Theodore McCarrick makes painfully clear. This is all the more reason why Christians require intelligent, articulate expositions of their faith that appeal to both mind and heart. Steadfast in Faith: Catholicism and the Challenges of Secularism, by classical languages and theology professor David G. Bonagura, Jr., offers Catholics another useful resource to help navigate modernity’s treacherous waters.

Bonagura’s is an ambitious task for a book under three hundred pages: to provide a coherent articulation and defense of the Catholic faith against the backdrop of an increasingly hostile secular world. By-and-large, the author succeeds. The text is divided into two sections that appropriately address the dilemma. The first part examines the “preliminaries to faith,” which includes a discussion of the contours of faith in the world today, a comparison of Catholic and secular worldviews, and an exposition on the arguments in favor of the existence of God (and a corollary refutation of popular atheistic critiques). The second part discusses the kinds of subjects one needs to understand after entering the doors of the Catholic faith and beginning to explore its rooms. These include the nature of believing in God, how to live the Catholic faith, the relationship between faith and the Church, the difference between certitude and doubt, the experience of faith spiritually and emotionally, the role of faith in the public square, and how to comprehend evil and suffering. This bifurcation is a helpful division, as it helps readers understand the essential reasonableness of their faith—which is required to defend one’s Catholic identity in the public square—prior to understanding those topics that presume both God and the truths of the Catholic faith.

Because the second part of the book focuses so specifically on a peculiarly Catholic faith, I will focus here on the first part, which is more accessible to non-Catholics. The first chapter on faith in the world today is effective on two levels—it maps and explains the reasons for declining religious belief in the West, while also observing that faith, defined as a level of trust in things that cannot be understood empirically, is inevitable in the human experience. In reference to the former, Bonagura censures the usual suspects: materialism, scientism, and an aggressive secularism that aims to excise religion from the public square. As for the latter, he rightly notes that we make acts of faith in the “generic sense all the time.” He quotes Newman:

We know little more than that we exist, and that there is an Unseen Power whom we are bound to obey. Beyond this we must trust; and first our sense, memory, and reasoning powers; then other authorities: —so that, in fact, almost all we do, every day of our lives, is on trust, i.e. faith.

One could also quote Augustine, who in his De fide rerum quæ non videntur observed that children are in a constant state of faith in relationship to their parents:

Because on this point also they have believed the accounts of others telling of it, who yet are unable to show it, because it is a thing already past; retaining themselves no sense of that time, and yet yielding assent without any doubting to others speaking of that time.

Indeed, if children are unwilling to place faith in their parents, it is quite hard to develop as persons! Yet even in such a simple, straightforward, intuitive truth, we can perceive how the pernicious effect of Cartesian rationalism and its rejection of Augustinian faith and Thomistic realism ultimately leads to a postmodern suspicion towards one’s own senses, as well as one’s family, who may very well be seeking to impose some manner of religio-socio-cultural power structure upon their progeny! Yet if one can overcome this Foucauldian philosophical dead end, one may very well be on the way to grasping the initial truths that can point one towards the Christian religion.

The second chapter proceeds with a comparison of secular and Catholic worldviews. Again, much of this is well-trod territory. Contemporary secularism is radically individual while Catholicism demands that individual freedom be oriented towards a specific good. Secularism embraces a self-defeating relativism that rejects objective truth … except its own totalizing “truths.” It promotes a twisted conception of pluralism that undermines truth by recognizing all positions as equally valid. Finally, it presupposes scientism, the belief that all reality can be explained by natural causes accessible to the scientific method. This, despite the fact that this itself is an unjustified presumption, and despite the very philosophically justifiable conclusion that some elements of the human person—and the universe—have a metaphysical component. As Bonagura notes, “scientific naturalists have essentially turned science into a god,” while rejecting the the very teleological nature of their academic discipline. All of this points to an inconvenient truth for the secular modern: though he tries to secure the higher ground by dispensing with faith for the sake of empirical truth, he also relinquishes the tools he needs to maintain a coherent, rational worldview. Indeed, although faith is distinct from reason, it is itself reasonable, and helps purify reason by orienting it towards important metaphysical truths that help man generate a moral framework in which to live, and an otherworldly telos to which to orient his efforts. Without that, nihilism and its accompanying moral disasters ensue.

Furthermore, as Bonagura explains in his third chapter, there are strong, defensible reasons to believe in God. Here he provides five arguments for God’s existence: contingency, design, conscience, man’s restlessness, and religious experience. Bonagura summarizes these arguments well, and in the process effectively demonstrates that “the scientific endeavor proceeds from countless acts of trust” and that faith-based knowledge of God is “entirely reasonable.” There are a few problems with this chapter, though none are fatal. First, the chapter could have used some closer editing. Two pages (63, 71) offer the same conclusions with adjusted language. More concerning is that his main interlocutor is the prominent “new atheist” Richard Dawkins; indeed, there is no reference to any other prominent atheist or atheistic argument. Moreover, Bonagura cites none of the great recent rebukes of new atheism offered by such Christian philosophers or theologians as Ed Feser or David Bentley Hart. Perhaps this is justified in an introductory discourse on the subject, though if one is looking for a broader defense of theism beyond debating Dawkins, one will have to look elsewhere.

The remainder of the text delves into a study of the Catholic faith. Bongaura explains that faith is more than intellectual assent to a set of doctrines but a relationship with Christ. He provides a thorough explanation of how baptism and the Eucharist are essential, foundational elements of Catholicism, both oriented towards eternal life with God. He demonstrates the indelible relationship between one’s personal faith and with the larger faith community—a community whose holiness can be undermined, but not destroyed, by the sins of its members. This truth is especially important in a time when many members of the Church’s hierarchy appear to have betrayed their flock either through their own indulgent sins, or by covering up and/or ignoring the sins of others. This is an unspeakable shame to the Church’s witness, but, like so many sins in earlier generations (the investiture crisis, the indulgences crisis, the scandals of the Borgia popes, etc.), is in its own strange way, a motive of credibility to the Church’s identity as of divinely origin. No other organization in human history has been so poorly administered, so full of scoundrels and fools, and yet persevered. How else could the Catholic Church continue, if not because God keeps her?

There is much to praise in his essay on how Catholicism can address (and refute) the errors of secularism. Perhaps Bonagura’s biggest challenge is the intended audience for the book: “teenagers, young adults, parents, grandparents, teachers, and those seeking to deepen their faith.” That is a broad range, and in our day few teenagers or college students are intellectually and academically capable of consuming such a text; those few, those happy few who are may not even need such a book. As a next project, Bonagura may want to transform these chapters into more of a study guide for a younger, less well-catechized audience, with perhaps some graphics and diagrams and chapter-by-chapter study questions. All the same, for those capable of consuming such a book—be they teenagers or grandparents—there is much to recommend. Indeed, we should pray for a Church open and intellectually curious enough to appreciate what Bonagura has done here.