A Nudge toward Freedom? 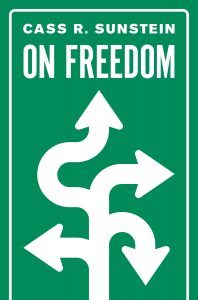 After a two-day symposium on “Freedom and Western Civilization” sponsored by Hillsdale College, awaiting me at home was Professor Cass R. Sunstein’s slim back-pocket-sized book On Freedom, which the New York Times argues shows what freedom really means and requires today. The argument is that Professor Sunstein’s book is a study of a dimension of freedom philosophers and economists have long missed. This slim pamphlet then undertakes to show what it will take to make this new dimension of freedom real.

Professor Sunstein is a well-known behavioral scientist, law professor, and quondam government official at Harvard. His approach can be summarized as a correlation with other soft sciences: psychology, sociology, anthropology—broad topics concerning group dynamics that lead to meaningful organizational development, administration, and management by “choice architects.”

The latter leads to experimentation and modeling, generalizing human behavior and how such relates to the world we live in and how we respond to internal and external stimuli. By “respond,” Professor Sunstein uses the word “navigate,” which assumes a sort of highway in life and the objectives a person sets for himself. It’s circumstantial in so far as a person can or cannot execute what he wills.

The usual assumption, of course, is that through acting as one wishes a person can realize their personal goods through appropriate actions. In rethinking freedom, however, Professor Sunstein’s behavioral science understanding of the nature of man and his thought argues that most people have no idea how to realize the means to achieve their various realizations for their own good. Because they lack self-control, many people are unable to achieve the more ultimate goals they set for themselves and thus fail to promote their well-being. They need help.

Since they are “unfree,” a better kind of “freedom” could be achieved by influencing behavior through what needs to be understood as operant conditioning, the theoretical goal of which is prediction and control, the business of “choice architects” who design and construct “nudges” with “several options, without specifying which one to choose.”

It is a careful book when the discussion turns to individual rights. “Nudging,” he notes must be respectful; persons must be allowed to choose by themselves, an idea borrowed “from the liberal philosophical tradition in the sense that it gives ultimate authority to individual choosers.” But in reality, so to speak, Professor Sunstein believes that everyone should agree that government “nudges” with official interventions should be “constrained by democratic requirements.”

Professor Sunstein offers an analogy for freedom of choice in his introduction, “Bitten Apples.” In the Garden of Eden, Adam and Eve exercised their freedom of choice and everything was lost. Such leads to the question as to whether or not people’s “free choices really make their lives go better” (8).

If such is a “given,” certain “nudges” can be designed “to increase the likelihood that people’s choices will improve their own well-being” (25, italics Professor Sunstein’s). “Nudges” are thus the means that lead to ends; he equates such with appropriate ethics used to influence behavior, which is proper for institutions to effect behavior in a special direction. The argument assumes a sincerity on the part of those “choice architects” who devise the various “nudges,” those subtle pressures by governments designed to steer populations in the direction of a better life—much like the GPS systems current on most automobiles.

The analogy Professor Sunstein makes is that people can “choose” to use the navigation system or not based on their own preferences, albeit to use the system is to acknowledge that people wish to act on expert advice, which is then more likely than not to make a person more happy than not.

It is perhaps a simple enough example until a question emerges: How valuable is freedom of choice? Professor Sunstein asks the reader to consider whether people really know and understand their own preferences. What if they are overwhelmed by options, or are just ignorant and unable to solve navigability problems? Wouldn’t it be true that better outcomes could be achieved with “choice architects,” government nudgers?

There’s a glibness to all of this which the Professor believes puts a zero value on people’s behavior subject to government paternalism, which vectors dangerously into straight coercion or outright policing. If this is a pathbreaking book asking us to rethink freedom and choices we make about health, money, jobs, children, and even relationships, we might reconsider that road not taken. The glibness is also overshadowed by Professor Sunstein’s argument that only the most exceptional and rational people will make correct choices without being “nudged”—people perhaps like Professor Sunstein. For him, however, most people suffer from the common foibles of being impulsive and easily fooled, the effect of little self-control.

One wonders, then, if Professor Sunstein believes that Adam and Eve were not more like Homer and Marge Simpson, living well-meaning lives in Springfield but surely in need of countless interventions and reforms and nudges to increase their navigability, which Professor Sunstein suggests needs to be “writ large.”

At this slim book’s conclusion the Professor quotes Milton, Paradise Lost, that tale, he says, of “freedom.” And it’s true, “The world was all before them, where to choose / Their place of rest, and Providence their guide.” The irony Professor Sunstein seems to have missed is that the poem states that “providence” was their guide and that such is more likely to be both more lively and more helpful than a government choice architect, about which Bart Simpson might simply utter “Eep!”