A Paean to Craftsmanship 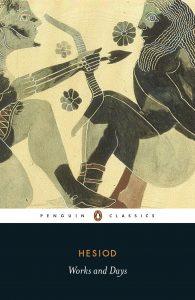 The new Penguin edition of Hesiod’s Works and Days includes a map. This is a curious decision. There are no journeys in the poem, composed by a self-confessed “landlubber.” “I’ve never sailed the broad sea on a ship,” Hesiod announces without regret, “Not yet, except to Euboea, my one trip”—a quick jaunt across a narrow straits. Homer needs a map. But Hesiod? The map, one surmises, isn’t there to show us where Hesiod went, but to indicate that he came from a specific place: Askra, “wretched town, / Bad in winter, harsh in summer, not / Ever pleasant.”

From this rural backwater on mainland Greece, contends A. E. Stallings, the translator of this new edition and a significant poet in her own right, emerged “the first poet personality in Western literature.”

By this, she doesn’t mean the first person to compose poetry. Nor does she mean that Hesiod predates Homer. (Though there is some scholarly disagreement, and though the Iliad, Odyssey, Theogony, and Works and Days are all artifacts of the eighth century B.C., she comes down on the side of Homer’s primacy.) Rather, she means that Hesiod was the first versifier to take on, in essence, the role of poietes—poet, maker. The Iliad and Odyssey may be greater works than Hesiod’s almanac-like verse, but they emerge from a longer oral tradition. Works and Days emerges from Askra.

This is not the academic consensus; but then again, there really isn’t one. Classicists debate whether the Works and Days and Theogony share an author—and even whether the former is a single poem, or just a compilation of wisdom literature under the label of “Hesiod.” Stallings can’t prove Hesiod’s historical unity. But perhaps she doesn’t need to. Maybe it does not matter whether a man named Hesiod wrote the Theogony or Works and Days so much as it does that the poems themselves claim that Hesiod wrote them. The Theogony announces his name; Works and Days his biography. Just as potsherds announce for posterity the names of their makers and those who drank from them, so do Hesiod’s poems. They are made, crafted things.

Stallings’s Hesiod, in many ways, is closer to the jealous potters and weavers he describes at length than to the vision of the blind, inspired, Muse-led Homeric bard of lore. The substance from which he crafts poetry is more than breath. Like clay and cloth, it’s tangible: the new letters of the Phoenician alphabet introduced to Greece at the end of its illiterate “Dark Ages.” This is significant. “The early alphabet,” Stallings observes, “likes to declare ownership or belonging, and it speaks in the first person.” In Hesiod, for the first time, the alphabet’s two earliest uses converge: it proclaims ownership even as it records poetry.

From this perspective, Works and Days looks like more than just a haranguing invocation of Hesiod’s ne’er-do-well brother, Perses, reminding him of the dignity of labor. It is rather an ode to craftsmanship and the thing well-made.

Hesiod gives instructions not just for the work of plowing, but for making a plow: its ideal dimensions, which trees to select, the need to hire someone skilled to actually build it rather than trying (like a foolish amateur) to do it yourself. Craftsmanship wins out over self-sufficiency. “Bind your feet in snug boots of ox leather, / Well-made, lined with thick felt,” he proclaims a little later. Pay attention, and even the dullest stretches of advice to modern ears—the planting seasons, the astronomical advice—start to sound as much like the praise of careful craft as they do a basic how-to guide.

This emphasis on craft marks an important break from the world and worldview of Homeric epic. In the Iliad and Odyssey, there are things shaped by artisans—but the truest craftsmen aren’t human at all; they’re gods. The famed description of Akhilles’s shield in Book 18 of the Iliad is a description of Hephaistos’s handiwork.

In contrast to craft, Homer’s heroes possess a single-minded focus on κλέος (kleos): fame and reputation, a glory that will outlast them. For its sake, Akhilles chooses a death in his youth; a central tension of the Odyssey is that, if he fails to return home, Odysseus might be forgotten and actually transformed into “No-One,” the false name he gives the Cyclops. (In Phaiakia, he asks the bard Demodocus to sing about the sack of Troy partly to test the state of his kleos after ten years of wandering.) Human dignity, in Homer’s world, inheres in the kleos won in the struggle of combat, in the clash of honor and dishonor.

Hesiod mentions kleos in the first verse of Works and Days, where the line-ending κλείουσαι (kleiousai) plays a role not dissimilar to the Iliad’s μῆνιν (meinin, the “rage of Akhilles”) or the Odyssey’s πολύτροπον (polutropon, “man of many devices”). It’s a poem about kleos and a poem about strife—striving for kleos, here as in Homer, is what separates humankind from the beasts of the field and birds of the air. This is more than what Stallings, in her introduction, calls Hesiod’s “Gospel of Work.” For Hesiod, she observes, “Work is the punishment for Prometheus’ original sin, but also the redemption.” It’s a pithy, astute summary, but I’d make one emendation: if work is the punishment, then craft is the redemption. You don’t need to sail for Troy to gain kleos, the poem announces. You can find it right here in workaday Askra: in the agonistic striving among potters, poets, farmers, weavers, even brothers embroiled in lawsuits. All you need to do is to sign your name, to mark your labor as your own:

“It turns out Strife’s a twin, a double birth—
There are, not one, but two Strifes on the earth—
A man who gets to know them both admits
One’s blessed, one’s cursed—the two are opposites.
One brings forth discord, nurtures evil war:
Wicked, there’s nothing mortals love her for
[…The other] Strife, high-seated Zeus
Set in earth’s roots—for this one has a use:
She spurs a man who otherwise would shirk,
Shiftless and lazy, to put his hands to work
[…] This Strife
Is boon to man. And that’s why in this life
Potter hates potter, builder has no regard
for builder, nor beggar, beggar; bard loathes bard.”

And what of the craft of the poem itself? “Translators who translate poems that rhyme into poems that do not rhyme solely because they claim keeping the rhyme is impossible without doing violence to the poem have done violence to the poem,” Stallings wrote in a 2009 manifesto for Poetry. “They are also lazy.” So what should we make of a translator who translates a poem that doesn’t rhyme into one that does?

In her note on the translation, Stallings insists that introducing rhyme in fact retains elements of Greek that would otherwise be lost in English: aphoristic flavor, a “timeless” language, the jangling line-end rhythm of dactylic hexameter. But rhyme does more than she admits: it binds thematic and formal craftsmanship.

Consider this by contrast with another recent translation from Greek literature. The most striking formal features of Emily Wilson’s Odyssey—12,110 lines, the same as the original; her command of iambic pentameter—emphasize the poem’s orality. (It’s a translation best read aloud.) Stallings’s rhyming couplets emphasize Hesiod’s writtenness. There are end-stopped rhymes, yes—these predominate in the later portions of Works and Days, tying together heroic couplets in a compendium of country wisdom: “Don’t raise a friend to the footing of a brother, / Nor, if you do, be first to wrong the other. / Don’t slander for talk’s sake. If he starts trouble / In word or deed, mind you to pay back double.” Elsewhere, however, rhyme weaves through enjambed mazes, as in her introduction of the fourth age of man:

“And when the ground had covered up this race
In turn, Zeus made a fourth one on the face
Of the richly pasturing earth, a juster one
And better, a god-like race of heroes known
As demi-gods—the race that came before
Our own on the boundless earth.[…]”

Unless I want to quote the entire passage, I have no choice but to break off mid-verse. So what’s written about this? “Rhyme can also free a poem from fixed line length,” her manifesto pronounces. “A rhyme lets us hear the end of the line, so lines may be of any metrical length, or even syllabic, and still be heard.” Stallings’s Hesiod composes according to two distinct syntaxes at once, breaking the rules of oral composition outlined a century ago by the studies of Milman Parry and Albert Lord. “Rhyme,” as she has already put it, “is an engine of syntax.”

An engine of syntax; a stamp of craftsmanship. Stallings is among the foremost formalist poets writing today—and rhyme (more than meter) resides at the center of her talent. Hesiod’s rhymes are Stallings’s invention (though, she confesses, she hears them faintly in the Greek’s opening lines). But it develops from her vision of him as a craftsman, working with the new material of the alphabet. He writes: writes first, then memorizes, then recites, and in doing so signs his name. Stallings signs hers, as it were, with rhyme.