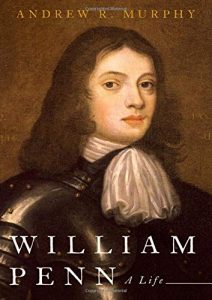 By the time William Penn (1644–1718) received his charter in 1681 from King Charles II for a new American colony he was already behind the times. New York, New Jersey, and Maryland, already well established, regarded Penn as encroaching on their territory. Boundary disputes abounded and, even worse, almost immediately Penn as proprietor of his own colony found himself out of sync with the new settlers. He was constantly playing catch-up, behind the development of public opinion in his own colony, and appointing administrators (one a Puritan, another an Anglican) who were out of sync with the Quaker mentality. But wait! It was worse than that. Penn expected a sizable income from Pennsylvania which never materialized. Most of his life he remained in debt, shifting between creditors without ever paying off what he owed, and ending up more than once in debtor’s prison in England. Hold on! He was also incarcerated because the established church distrusted Penn and other Quakers who would not swear oaths to the Crown but only “affirm” their allegiance. Even when he found an ally, James II, he picked the wrong protector, a Stuart monarch, suspect because of his Catholicism, and eventually forced to flee to France.

You think that would be enough trouble for Penn. But no! He was something of a con man, consigning lots of land to friends who then engaged in decades of disputes with the Pennsylvania colonial government, claiming title to what Penn had promised but never put in writing. Penn was never that popular in his own colony and, in fact, spent little time there, although he was always announcing his return. At various points, the whole business of colony proprietorship became such a hassle he thought of selling it all back to the Crown.

Although Penn never thought of himself as an American—no such conception existed yet—he seems one of us in the very contentiousness and ambition of his goals, wishing sincerely to establish a land where freedom of worship prevailed, if not exactly on the democratic terms that have become part of this country’s governing ethos. Penn lived in a world of deference and condescension. He expected colonists to bow to his demands and never could have supposed that their recalcitrance marked the beginnings of a new people and a new identity that would not be bound by old-world principles.

This William Penn, whose story, I think, demands exclamation marks is what I have gathered from Andrew R. Murphy’s authoritative, if plodding narrative. One virtue of plodding is that it shows just how dogged Penn was in asserting his rights and just how resistant the colonists were to simply acceding to his authority. Over and over again, we learn that Pennsylvanians were not behaving as their proprietor instructed. In fact, they did not seem to want to be instructed. A brisk summary of Penn’s troubles, cutting out the back-and-forth of decades, would have made Murphy’s biography a more engaging read but also less true to what it felt like for Penn and his friends and adversaries. This is the dilemma of any biographer who wants to be thorough, true to the evidence, and willing to sacrifice story values for meticulous attention to the factual, documentary record.

Another problem Murphy cannot overcome is how little we know about Penn’s feelings—other than that he was stubborn, courageous, and a loving husband. We know that his son was a big disappointment—reckless and demanding but without, it seems, much in the way of administrative skills or loyalty to his father’s Quaker principles. That there was more to Penn, the man and the thinker, is apparent from his friendships and alliances with those in power. Without forsaking his belief in freedom of conscience, which he wrote about extensively even when it put him in dire political trouble and then in prison, Penn worked well with the powerful and influential—perhaps because he grew up in the confidence of his father, an admiral, who had established the family’s importance in public affairs. At the same time, though, a disappointed father urged his son to relinquish Quaker principles that stood in the way of his son’s advancement in the English establishment. Yet somehow (we don’t have the evidence to know exactly how) Penn never quite lost the affection of his father and never went so far as to alienate himself completely from the political and Church of England establishment.

Penn was a curious mixture of opportunism and principle befitting the founder of new colony. He genuinely promoted the prosperity of others. He believed, somewhat naively, that as soon as he primed their expectations, their business would profit his own. Pennsylvania was not exactly a pyramid scheme, but let’s just say that no administrator Penn appointed could ever quite sort out all the deals Penn had made with Pennsylvanians who claimed more land than any written document could verify.

Enough is known about Penn to describe him as a character, not just as a transactional entity involved in various political, economic, and social controversies. But Murphy never really assesses Penn’s character, perhaps thinking a description of Penn’s actions is enough, so that the reader can do the rest of the work. Part of the problem is Murphy’s dull prose, his employment of overused expressions like “that said,” and perhaps his sensibility. He does not see what a comic figure Penn is in certain respects for all the seriousness of his occupations and principles. Penn had a penchant for getting into predicaments that a biographer with a Dickensian sensibility might well appreciate.

Murphy’s Penn is for scholars, which is all to the good in so far as that kind of biography goes, but Penn is also a study in personality full of magnificent contradictoriness and contentiousness. We need more than summaries of his arguments and conflicts. We need the wit of Lytton Strachey to bring to life Penn’s quirkiness that combined with an insatiable idealism and hopefulness. To be sure, Penn sometimes seemed to lose heart and submit to self-pity, but he was forever rebounding, overcoming setbacks deserving of a narrative that would make of his life something of a picaresque novel.

Carl Rollyson is the author of American Biography and the forthcoming This Alarming Paradox: The Life of William Faulkner.