A Refreshed and Refreshing Federalist 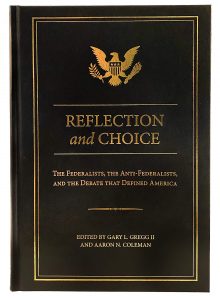 Since the original publication of The Federalist as a collection in 1788, there have been dozens of editions and commentaries on the eighty-five essays written by Alexander Hamilton, James Madison, and John Jay. The essays have maintained their relevance over the course of two centuries because they are windows into the minds and imaginations of the American Constitution’s framers, and they put intellectual meat on the bones of a document that is more like an impressionistic sketch than a detailed map.

The Federalist explains why the Constitution separates the powers of government into three branches and two levels and why a strong executive and independent judiciary are essential to good government. Understanding features of the American constitutional system like the electoral college or impeachment process is deepened by reading the essays written to explain and defend the document and the system of government it creates. It is no wonder that Supreme Court justices cite them with great frequency to explain the Constitution’s meaning. They were written as part of a public debate that culminated in ratification of the Constitution, which has endured longer than any written national constitution in the world. Their relevance has grown with time as Americans struggle to abide by a document written long ago and in circumstances that only faintly resemble contemporary America. With each generation, the Constitution and its underlying political theory face new efforts to undermine their legitimacy. The document has persisted for centuries, with the help of amendments, because it is based on enduring principles of government and politics that are articulated in The Federalist.

Not all editions of The Federalist are created equal. Most include the original essays and little else. The new edition from Gary L. Gregg II and Aaron N. Coleman is the most extensive in print. In addition to the original eighty-five essays, now divided into fourteen topical sections, it includes companion essays by the Anti-Federalists, biographical sketches of the three Federalist and twelve Anti-Federalist authors, an introduction, fourteen section essays and “Questions for Our Time,” an appendix that includes the Articles of Confederation and the Constitution with its twenty-seven amendments, and an index.

Including so much between the covers of one book makes this edition ideal for high school teachers and college professors who wish to provide students with a more complete representation of the debates over the creation and ratification of the Constitution. Rarely is the Anti-Federalist voice included in editions of The Federalist. By pairing Federalist and Anti-Federalist essays, readers gain a much better sense of the context for the Federalist Papers and the arguments made in support of the Constitution. The arguments made by Hamilton, Madison, and Jay were not made in a philosopher’s closet, but as counterarguments to those made by the Anti-Federalists. They are historical as well as philosophical and political. Readers who are unfamiliar with these debates will be struck by how spirited yet civil and thoughtful they were.

The title of the book, Reflection and Choice, is taken from Hamilton’s Federalist 1. There he comments in the first paragraph that “it seems to have been reserved to the people of this country to decide, by their conduct and example, the important question, whether societies of men are really capable or not, of establishing good government from reflection and choice, or whether they are forever destined to depend, for their political constitutions, on accident and force.” The Constitutional Convention was one such example of the people’s representatives engaging in the work of constitution-making, work that requires the very stuff of constitutional politics: reflection, choice, deliberation, debate, compromise, and consensus. The state ratifying conventions that followed the Constitutional Convention broadened the debate in three important ways. The debate became public; it was national and at the same time local; and finally, the debate greatly expanded the number participants in the debate. The Philadelphia convention was closed to the public and the press. The convention’s delegates engaged in robust debate and argument that resulted in a consensus that the existing Articles of Confederation should be replaced by the new constitution produced by the convention. This initial consensus was then subjected to extensive public debate that gave rise to The Federalist and Anti-Federalist essays. Both sets of essays are parts of a whole. Reading one group of essays without the other skews one’s understanding of the issues and arguments and leaves one with a truncated understanding of history’s first great public debates about the creation and selection of a republican government.

Reflection and Choice is, then, a book that provides historical understanding in a way that is relevant to the contemporary age and its challenges. For example, the intellectual and philosophical level of the debate between Publius and the Anti-Federalists is remarkably deeper and more civil than what typically passes for public, political debate today. The essays assume that readers are equipped sufficiently with knowledge about republican government, human nature, ancient history, international relations, economics and trade, and public finance to follow rather sophisticated arguments.

Reflection and Choice provides primary source readings that argue for and against various constitutional characteristics and clauses. The “Questions for Our Time” present a host of issues that were relevant to the ratification debate in the late eighteenth century and remain salient in contemporary American politics. For example, Section Fourteen is devoted to the debate about the exclusion of a bill of rights in the Constitution. The editors ask readers to consider the issue in light of recent debates about the expansion of national power. Surely with irony in mind, the editors ask if the eventual inclusion of a bill of rights in 1791 contributed to the very thing the Anti-Federalists wanted most to avoid, a large federal government that infringed on the power of states to govern themselves. Could it be that Hamilton’s Federalist 84 was on to something when he argued that a bill of rights could be dangerous? In section eight, the editors ask if the Framers’ system of separated and checked power still works. Such questions compel readers to move beyond the role of mere observers of historical events long past and to evoke such historical experiences as a way of exercising their duties as citizens in contemporary America, to be students and stewards of the republic. The book allows readers to deepen their historical knowledge as a prelude to participating in American politics in a more insightful, historically informed, and thoughtful way.

Readers who are unfamiliar with the debates between the Federalists and Anti-Federalists will be struck by their depth, substance, and civility. While there are instances of polemics and exaggeration, the debates demonstrate political rhetoric in a republic at or near its best. Moreover, the pairing of essays from each side allows readers to see that the focus of the arguments is substantive and aims to convince those who were undecided or wavering about ratification. The debates are partisan in one sense—they advocate for a particular political outcome—but they lack the overt partisanship of contemporary politics, a context in which political parties and political ideologies leave little room for genuine and principled debate. The Anti-Federalists do not claim that the Federalists are self-interested or merely hungry for power. They generally take the Federalists’ arguments at face value, but then explain why it is the Anti-Federalist views that comport with historical evidence and reason. The same can be said of the Federalists. The civility and substance of the debates are important because one way or the other, the two sides had to work together in building a republic whether it was legally formed by the Articles of Confederation or the new constitution. It indicates something profound, that after the debate was over and the decision made to adopt the Constitution, the two sides continued to have their political and philosophical differences, but they were able to participate in the work of constitutional politics: compromise, consensus, and deliberation. Their differences were not so great that the debate destroyed the possibility of unity within a plurality of political and philosophical views.

Such unity is far less likely, if not impossible, in a regime that was created by and is based on zero-sum politics. Individuals have to be willing to compromise with those on the other side of the debate. There has to be room for give and take and the synthesis of seemingly disparate ideas. The addition of a bill of rights was a major compromise between the Federalists and Anti-Federalists. That unity and synthesis of ideas, as opposed to uniformity, were possible in the aftermath of the constitutional debate speaks volumes of the distance between the Framers’ age and our own. Yet it is also a reminder of what makes constitutional politics possible: liberal learning, republican virtue, and a willingness to see one’s political opponents as instrumental partners in the work of governing a republic.

Michael Federici is professor of political science at Middle Tennesee State University and author among others of The Political Philosophy of Alexander Hamilton.