A Timeless History of Public Education 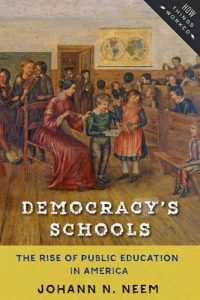 Democracy’s Schools is written by Johann Neem, an Indian immigrant brought to America as a toddler. He credits public schools with making him an American and giving a common experience to America’s increasingly diverse young generations. Perhaps being raised by immigrant parents shielded Neem from some of the tired partisan scrum surrounding issues of education in America. His book is objective in its recounting of history, and fair and incisive in its analysis. It will be satisfying in many ways for skeptics of public education, but it may be a more important read for public education’s less critical cheerleaders.

Most of the book tells the story of the public education reform movement in the nineteenth century, prominently featuring Horace Mann, with developments in the broader history of public education interwoven throughout.

Neem is clearly a supporter of public education, but is surprisingly sympathetic to skeptics. Two examples stand out: first, his discussions of localism—local control of school curriculum and hiring decisions and the role of parents in schools. And second, his shorter but perhaps more interesting chapter on Catholics and the issue of religion and sectarianism in public schools.

In his critique of the reformers, he notes more than once that they tended to give short shrift to parental involvement and to local administration, two factors that substantially helped public schools arise in the first place. “The greatest growth in school attendance before the Civil War took place before there was significant government oversight and taxes,” Neem notes. The very first public schools were administered locally, with the teacher and curriculum usually selected by the community of parents.

The reformers’ vision of a professionalized corps of teachers and a more heavily regulated and bureaucratized school system was not necessarily a bad one. But it was a vision that too often failed to grapple with the actual history of the schools that already existed, and with the reality of what took place every day in the schoolhouse.

One example shines above the rest. Neem retells a fictional story by reformer Daniel Thompson in which a new teacher turns a class of brutes into intellectuals who study so intensely that a doctor collectively diagnoses them with “brain fever,” or lethargy and fatigue from “too much mental excitement and exertion.” The parents, believing the schoolmaster is making their children “too intellectual,” nearly get the teacher fired, until a second doctor determines that the symptoms are due to bad air in the poorly ventilated schoolhouse. The parents relent, and the schoolmaster continues his transformative work.

The story perfectly encapsulates Neem’s critique of the reformers: at bottom they tended to have a starry-eyed view of pupils as adoring, easily shaped young people who couldn’t wait to become liberally educated, self-making young adults. The reformers were quick to blame lazy or poorly trained teachers, inadequate school buildings and supplies, and greedy or backward parents who either dismissed liberal education as elitist or didn’t want to pay higher taxes for a more robust public school system. They seemed to believe that if only they could have their way, every pupil in America would be coming down with “brain fever.”

This seems to be an error most progressive reformers make. Criminal justice reform comes to mind, in which talk of families, rehabilitation, and other pleasant ideas is front and center. The usual skeptical response—“Have you ever been inside a prison and met these prisoners?”—is more or less exactly what teachers and parents were saying to school reformers.

On the issue of religion in schools, Neem analyzes the sort of secularized Protestant ethic of many reformers, and agrees that Catholics were not wrong in their complaints that public schools were sectarian, and that their de facto religion was weak Protestantism mixed with an individualist ethos that could ultimately be antithetical to the common good. Indeed, after reading about reformers like Mann, in particular, one can understand exactly why progressives are sometimes described as secular Puritans.

There are many other bits of history in the book that, if widely known, might make for a more fruitful debate on education today.

Many of the tropes of education debates—the notion of schools as elitist, the stereotype of teachers as lazy, resistance among wealthier families to paying into a public school system they sought to bypass via private schools, and countervailing criticism of private schools as elite sanctuaries—were well established even by the middle of the nineteenth century. Debates over different types of schools—private, public, and schools resembling today’s charter schools—were common, as were controversies over subjects and testing. If this book could somehow be stripped of any identifying historical context, it could easily be mistaken for a book on contemporary American education.

Neem’s treatment of race is brief, but he frankly acknowledges racism and racial disparities in school access and educational attainment. Elite Southern whites feared educated blacks, partly because they were living contradictions of the idea that blacks were “natural slaves.” The reformers, including Mann, were mostly not racists, but either out of moral cowardice or out of a pragmatic desire to cultivate a wide base of support, they usually sidestepped or avoided questions of race.

A final historical nugget here is that, in Neem’s telling, schools were almost comically violent in the 1800s. More than one incident brings to mind a Three Stooges episode. One instance involves a switch fashioned from an entire young tree; another involves an overbearing teacher being thrown into a snowy bank outside. Neem even cites a student rebellion in which a disliked schoolmaster was locked out of his own school.

Schools may well have been highly functional and disciplined by the middle of the twentieth century, the golden-age period conservative Boomers sometimes point to when criticizing contemporary public schools. This brings to mind two thoughts. One is that the educational experience of Boomers was in fact largely based on the ideas of the earlier century’s reformers, and was therefore already far more of a consciously engineered product than memories of a no-nonsense “Three R’s” approach might suggest. Second, this is a useful reminder that treating 1950 as Year 1 in American history is likely to yield seriously off-base conclusions.

Beyond its illuminating history, Democracy’s Schools is fascinating for the ancillary issues it raises along the way.

One of the things the reader will notice is that in some ways, the school reformers were nationalists. In addition to teaching basic utilitarian subjects and higher subjects like liberal arts, they also wanted schools to teach children to be Americans, with the aforementioned subtext of Protestantism and self-made individualism. This sort of nationalism—perhaps all sorts of nationalism—is a kind of social engineering, and it is at odds with the localism of the early public schools, as well as the localism and federalism that characterized early America.

A later example is Christian socialist Francis Bellamy’s Pledge of Allegiance. Today, the ideas of nationalism and “American identity” are associated with the Right. But these nineteenth-century nationalists were also progressives, and their notion of national identity was a modern innovation in some ways foisted on an earlier American identity in which states and local communities came first. There is much food thought here about what “the nation” really is.

Another theme is the challenge of diversity. Even before the Civil War, it was difficult to craft a curriculum that could educate and inspire all students without offending any (or their parents). This intensified with mass European immigration. Yet those who decry immigration today as a unique and modern challenge to national cohesion may go too far. Critics often emphasize, for example, that many of today’s immigrants are neither Christian nor European. Yet Catholics and Romanians, for example, were at least as foreign to nineteenth-century Americans as Muslims and Ethiopians, say, are to twenty-first century Americans. The clash between pre-Vatican II Catholicism and America’s strange Protestant nationalism—which to the modern reader may look like the narcissism of small differences—reads in the primary sources as an existential crisis of national identity. Long before fears of schoolchildren being forced to recite Islamic prayers, Catholics feared the teaching of the Protestant Bible. The more things change, the more they stay the same.