A Treatise for Counterrevolutionaries 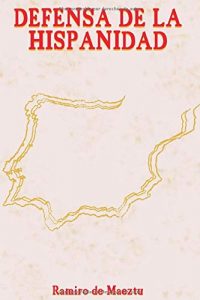 If Ramiro de Maeztu y Whitney (1875–1936) is remembered at all today, it is because of the manner of his death. Taken from his prison cell in the middle of the night in his pajamas, despite months-long efforts by the UK and Argentine embassies to free him, he was shot by a leftist death squad of the Second Spanish Republic during the early stages of the Spanish Civil War. His reported last words to his killers were “you do not know why you kill me, but I know why I die: For your children to be better than you!”

Maeztu was not a Falangist or a Franco soldier, but he was a bitter critic of the Republic even though he served as parliamentarian (1933–1935) in the Republic’s Cortes. With statues of Spanish explorers, saints, and soldiers being torn down in the United States in an orgy of anticolonial and antiimperialist fervor, the political thought of this arch-reactionary seems more salient than ever. Ninety years ago, Maeztu spoke powerfully about burning issues that seem torn from today’s headlines—identity, history, faith, politics. The Spain he wrote about and sought to influence barely exists, but the matters that moved him transcend the borders of his own country and language.

He sought to influence a Spanish audience at a time of great turmoil, and the man and his views, when not ignored, have since been derided in some Spanish discourse as “fascist” or far-right. After his death, given how he died and the traditionalist tone of his later writings, he was embraced by the Franco regime. But he has also been described more respectfully as “the main counterrevolutionary theorist of Spain, a man who updated the political discourse of the integral Catholic right, for which social order must be linked to the search for the common good.”

As his last names indicate, Maeztu was of Basque origin and his mother was English. His father had emigrated to colonial Cuba where he lost his wealth in the wars for Cuban independence. Young Maeztu was reduced to helping his impoverished father sell bread door to door on the streets of Havana.

Maeztu would early on be identified with the “Generation of ’98,” an influential group of young Spanish writers and intellectuals traumatized and transformed by the loss of almost all of Spain’s remaining empire at the hands of the Americans. It was a heterogenous group but many leaned towards the left and towards modernism and reform. Maeztu, who was more than anything else a prolific journalist and opinion writer, was influenced by Nietzsche and by Fabian socialism as a young man, but he and others would end up on the political right. The carnage of the First World War, witnessed as a Spanish war correspondent, brought him back to his Catholic faith. He rejected the term “conversion” because he had never truly abandoned that faith.

Maeztu’s great work on how and why Hispanic Catholic civilization matters and is to be valued is his 1934 book Defensa de la Hispanidad (In Defense of Hispanism), which had its genesis in a lecture he gave while serving as Spain’s ambassador to Argentina in 1929.

For Maeztu, Spain and the Spanish speaking world are best united by historical tradition and Catholic faith, epitomized in the Spain that reached its peak under the Habsburgs (1516–1700). He sympathetically portrays the civilizing and evangelizing work of Spain in the New World united under “the ancient Catholic Monarchy, instituted for the service of God and our fellow man” which he saw as fatally unraveling under the baleful influence of the French Enlightenment imported by the Spanish Bourbons. The poison that began in the eighteenth century would reach its full force in twentieth-century modernism and liberalism, “not a philosophy that sustains or a satisfactory system of law, nor the well-being of peoples, nor great art nor history nor poetry.”

He saw Spain’s fervent Catholicism, nurtured by the struggle against the Moors and against the Reformation, as tied indelibly to its empire: The New World was discovered the same year that the Cross was raised over Granada. Columbus discovered the Indies on the traditional day—October 12—that the Virgin Mary appeared to the Apostle James (Santiago, patron saint of Spain) at Zaragoza.

Maeztu does a good job of answering some of the hoary charges we hear to this day from woke revisionists and modern partisans of the Black Legend of Spain, but this element in his book is dated and has been done better and more recently by such writers as Maria Elvira Roca Barea and Iván Vélez. He does state a warning often ignored in the West today that “mere prudence would say that a people cannot live with its glories unknown and its shames nakedly revealed, without fleeing from itself and dissolving.”

Much of what Maeztu hoped for ninety years ago has not come to pass. Spain’s relations with its colonial offspring are nothing like the “special relationship” between the United States and the United Kingdom. Spain was never able to develop anything approaching the British Commonwealth or even la Francophonie. The struggle that he described between American capitalism and Bolshevism in Latin America continues, the latter replaced by a rising China. An Iberoamerican third way that could contend between those two poles never developed. The spiritual reawakening Maeztu longed for happened, in Latin America at least, among evangelical Christians and not Catholics and Spain today is much less distinctive, and less religious, than he thought it would be. The type of political system he envisaged can be found today in Europe, not in a divided Spain currently misruled by Socialists and Communists, but in Hungary and Poland.

But Maeztu was more prophetic on other matters. Yes, his was an authoritarian outlook (“duty, hierarchy, and humanity”) unacceptable in the West today but one that saw much value in a humanism grounded in religious faith. Unlike secularism and modernism, Maeztu contended that this kind of society provided true meaning and brotherhood, a faith in something real, in which “all men can be saved.” His vision of identity politics was more generous, broader, and kinder than what we see preached today. The global Hispanic Catholic community he so passionately described is not a chauvinistic or racist nation but—a term in vogue—aspired to be a civilization state, unique and enduring.

Maeztu saw clearly that, in the end, what would become the dominant liberalism of our age would not be enough and could not satisfy. “The fraternity of man can only be found in the paternity of God.” Nor would Western-style colonialism serve. The peoples of Asia and Africa “will either become our brothers or our masters.” He also saw the destructive tendencies of our own modern societies that would target their own heritage and traditions, “it is as if some spirit possessed us, exciting us to be someone else and not ourselves.” A people that is not faithful to its origins is lost.

The pathologies Maeztu traced from Rousseau and Robespierre to his own day have only deepened, as the West—in the guise of tenured radicals and malevolent children—dismantles and deconstructs itself leaving something even worse than a vacuum, “a perpetual gagging, a constant menace, a permanent insult.”

If he was mistaken about the needed solutions, Maeztu was not wrong about the problems. He called for “knights of Hispanism,” to defend something which was very specific and precious to him. For us today, the burning questions are not only if we are able to defend ourselves, but if we comprehend what we are defending and how much of it—after decades of masochistic assault—actually exists.