A Virus and a Fall of Rome 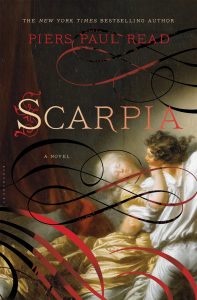 You could enjoy this novel about a young Sicilian rising through the ranks of Roman society in the 1790s without knowing anything about Puccini’s Tosca. It’s a page-turning entertainment replete with steamy affairs, internecine intrigues, and lush descriptions of a period that saw Pope Pius VI deposed and the Eternal City declared a republic. But to be truly appreciated, the book must be understood as the antidote to a mythical narrative that grips the modern mind—that of the noble revolutionary struggling against the wicked forces of religious oppression.

Read wrote Scarpia after encountering Susan Vandiver Nicassio’s 2001 book Tosca’s Rome: The Play and the Opera in Historical Perspective. His intent, he says, was to “redress the calumny of a French playwright, filling in the gaps left by history with invention.” Puccini’s opera is based on Victorien Sardou’s anticlerical play. The sympathies of both works lie with the escaped political prisoner and former Roman consul Angelotti and the painter Cavaradossi. Vitellio Scarpia is depicted as a cruel villain who seeks to extort sexual favors from the lovely singer Floria Tosca, only to go back on his promises.

In sharp contrast to Sardou and Puccini, Read paints Scarpia as a sympathetic if hot-blooded outsider and faithful Catholic who is justly dismayed by patrician Rome’s supine accommodation of Jacobin politics and libertine mores. Read’s Angelotti, on the other hand, is above all a scoundrel looking to profit from seizure of Church lands (he buys the confiscated palace of the Grand Master of the Knights of Malta for a pittance). As for the novel’s artists, they are depraved seducers who casually play the field, arousing lust and jealous passions.

But the book does not simply invert the opera’s Manichean clash between heroic free-thinkers and sadistic papal henchmen. No angel himself, Scarpia has several love affairs, the least sordid among them a fling with the shrewd, sensual peasant-become-diva Tosca. Then, in a lull between military exploits, he succumbs to the deadening effects of acedia. These interior wounds are salved with help from his spiritual director, an Oratorian who imposes stern penances. A number of pivotal scenes involve the sacrament of confession, which operates deep changes in both Scarpia and his wife, the Roman princess Paola di Marcisano.

Although he is best known for his 1974 reportage Alive: The Story of the Andes Survivors, Read’s preferred genre is the novel. In such works as A Patriot in Berlin (1995), an international thriller, and Alice in Exile (2001), set in the years before and during the Russian Revolution, he has combined pulse-quickening premises with literary sophistication. Read is also an outspoken defender of Catholic orthodoxy. Writing in 1997, he observed that a society in which there is no agreement on moral principles needs artworks that witness to objective truth. It is in just such a society, however, that believing authors have every incentive to separate their faith from their art. Indeed, despite having written bestsellers, Read was obliged to publish The Death of a Pope (2009) with Ignatius Press because of the novel’s overtly Catholic subject matter. In Scarpia he has avoided the problem by choosing a setting and era in which religion is woven into the fabric of everyday life and sin and forgiveness are natural topics of conversation.

Instead of limiting his story’s scope to June 1800, as in Tosca, Read traces his hero’s social ascension starting in the late 1770s. After an admirable but insubordinate act of daring, Vitellio Scarpia arrives in Rome accompanied by his sidekick, Spoletta. He is disgraced and practically penniless, but under the patronage of Treasurer—later Cardinal—Ruffo he secures a spot in the papal army and eventually marries into the old Roman nobility. Then, as Napoleon’s army approaches, Scarpia finds himself on a blacklist. He must return to his native Sicily while his wife remains behind to dally with lascivious Frenchmen and, worse still, with republican civic religion.

The story’s historical backdrop is lavishly painted. Some may find themselves reading the expository sections (“On 5 May 1789, the French Estates General convened at Versailles …”) more impatiently than gratefully. Still, Read narrates diplomatic catastrophes, mob violence, and Napoleonic battles with an irony that recalls Stendhal, whose treatise On Love gets a mention. (As portrayed in this novel, Scarpia may owe a debt to the French author’s Julien Sorel and Fabrice del Dongo, whose impetuosity and physical courage similarly set them apart in a world of blasé courtiers.)

By interweaving private sins and historical debacles, Scarpia issues a warning: embracing theological error has an inevitable price. “Man is a delicate mechanism, Vitellio,” remarks Cardinal Ruffo. “He can easily be set off course. We know from God through revelation the truths about our condition, and distortion of these truths can have grave consequences through many generations to come.” Jacobin ideology foreshadows today’s totalitarian identity politics, and the fate of post-Revolutionary Rome could be that of any Christian society severed from its roots. Upon arriving in the Eternal City as a young man, Scarpia encounters a vibrant culture steeped in “the values of the Gospels”:

… the poor were respected, even revered. Monasteries, convents and lay fraternities vied for the privilege of caring for the needy—feeding them, clothing them, educating them, giving them shelter and tending them while they were sick. There was free primary education, funds for dowries for impoverished girls, and the newly built prison, the carcere nuovo, was the most advanced in Europe. Foreigners who lent themselves airs or showed contempt for the poor were despised: in Rome a prince or a cardinal would happily share a pinch of snuff with his coachman or a beggar on the street.

Many of the city’s inhabitants laze about; everyone takes long afternoon naps. Nobles throw open the doors of their palaces to exhibit art collections. The churches offer music on feast days, followed by celebrations with public concerts and fireworks. The jubilation of carnival gives way to savage fasts during Lent.

But a philosophy incubated in Parisian salons is making its way southward. At a synod summoned by the Grand Duke of Tuscany, “radical ideas” emerge, including recommendations to ordain married men and burn fake relics (the locals respond to the latter proposal by rioting in the streets). Soon “the virus of scepticism” begins to spread in Rome itself. Fashionable clergymen “took part in theistic rituals, and expressed the opinion, sotto voce, that the Gospel was a fairy story and Jesus of Nazareth a gentle rabbi who never claimed to be the Son of God.”

By the time Scarpia is forced out of Rome, the holy city and the Papal States have a republican government, a constitution, and five Consuls:

The bronze angel on top of the Castel Sant’Angelo had been renamed ‘The Liberating Genius of France’, painted the red, white and blue of the French tricolour flag, and a Liberty bonnet put on its head. Crucifixes had been replaced by Liberty trees, statues of saints by busts of Cato and Brutus. Patriots rather than penitents now processed through the streets of the holy city, acclaiming the Nation rather than God. A grandiose memorial service was held for the republican martyr, General Duphot, in St. Peter’s Square—men in togas extolling his heroic virtue while young women in diaphanous costumes danced around a papier mâché altar. At the Piazza di Spagna there had been a ritual burning of the archives of the Roman Inquisition, where half-naked youths with wings attached to their shoulder blades lit the bonfire, and, at the summation of the ceremony, a naked woman symbolising Truth was seen rising from the Ashes of Superstition. The Roman hoi polloi, watching from the Spanish Steps, had booed and jeered, and pelted the performers with rotten vegetables.

A flair for the long game as regimes come and go has kept Rome’s leading families in power for centuries. It has also sapped their martial virility. Jacobinism spreads so easily through the privileged castes, Read suggests, because they have exchanged virtue for conformity to fashion, their tastes imported from Paris. Paola di Marcisano “was governed less by her confessor than by a notional committee of slightly older women—the arbiters of what was comme il faut and à la mode.” The new ideas, which the novel’s prelates describe as “satanic” and compare to a “malign virus” and a “plague,” release those infected from qualms about love affairs while conferring a sense of moral superiority. “What cardinal lives in evangelical poverty?” sneers the atheist Count Palmieri. “What parasitic priest would, if he truly believed in Christ, be able to look Christ in the face at the Last Judgment?” Scarpia has read Voltaire and is prepared for these arguments that mimic and simultaneously try to outflank the Gospel message. He even brings a blush to his adversary’s cheeks by pointing out that the American founders owned slaves, using a moral judo hold that has become the main act in radicalism’s repertoire only centuries later.

By the novel’s final sections Scarpia has matured into a father and soldier striving to cultivate Christian virtue on and off the battlefield. He remains chaste in the midst of a bloody civil war, even as many around him commit atrocities. But despite exemplary valor (he leads his men into battle, sword drawn and musket in hand), his acts of Christian mercy alienate him from his fellow counterrevolutionaries. Similarly, in what may be the book’s most moving storyline, his estranged wife, sobered by the regular political executions and feeling remorse over her part in republican liturgies, follows a redemptive path that earns her scorn from the trendsetters she admired. There are no happy endings here—unless, of course, one adopts the perspective of eternity, which, in contrast to Tosca’s clichéd anti-Catholicism, is what this diverting and intelligent novel invites us to do.