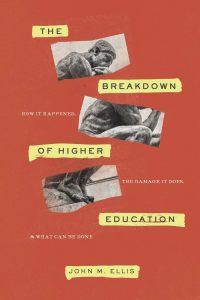 The Breakdown of Higher Education: How It Happened, the Damage It Does, and What Can Be Done
by John M. Ellis.
Encounter Books, 2020.
Hardcover, $224 pages, $26.

The irony of the year 2020 is that our culture is blind. By forsaking the light of history, our universities appear worthy of a new Dunciad, where “universal darkness buries all.” We come late in a long history, and we are (or used to be) sensitive to the philosophical and political problems that defy simple narratives. But the story of how the modern world came about is our story. To “cancel” those who would tell this complex story accurately is to bury ourselves in darkness.

John M. Ellis’s urgent and indispensable book The Breakdown of Higher Education reaches us at a time when the cancel culture shows no sign of abating. Fortunately, Ellis possesses an acute consciousness of history. Knowing history, he puts the anarchy-inducing accusations of systemic racism and ubiquitous sexism in perspective. He shows where in our culture these familiar charges and their attendant moral commitments originated. It is brazenly ignorant to condemn the past according to present-day moral standards that are the product of that past.

Historical sensitivity is increasingly rare. The professoriate, with little exception, can no longer think historically. It is too wedded to political radicalism, which wants to destroy Western civilization and replace it with a society so righteous that people will have no use for history at all. In fact, Ellis cites research indicating that our college graduates know next to nothing about history. Most of them wouldn’t know the U.S. Constitution from a hole in the wall. Ellis reminds us that the Constitution was written and vetted by scholarly men who’d mastered one key lesson: don’t give tyranny an opening. Sadly, that kind of learning-opportunity is now forbidden, because the West is contaminated by racism and sexism. Ironically, then, the great if imperfect good of the U.S. Constitution, which laid the groundwork for the Fifteenth and Nineteenth Amendments, must be jettisoned because James Madison and his colleagues were no better than inspired geniuses working within their timeframe. They were not transcendent beings. They were not woke.

To young progressives already brainwashed, The Breakdown of Higher Education probably comes too late. To young conservatives that owe their sense of history to Rod Dreher’s The Benedict Option, Ellis’s book may prove useful as a counterpoint. Ellis is a serious intellectual grounded in the modern world. Dreher, by contrast, is a populist Christian leading a revolt against modernity. It’s always tempting to quit. But if nothing is more essential to the conservative movement than acquiring historical knowledge of how we arrived at our current situation, then Ellis has much to teach us. Next time you’re told your entire worldview is racist and sexist, you might quote him: “The worldwide abolition of slavery was an accomplishment of Europeans, including those who moved to North America.” Again: “medical, technological, and social changes” have given “women opportunity that they could not possibly have had before.” And again: some “minority groups complain when their traditional clothing is ‘appropriated’ by Europeans, but those same people routinely visit dentists, board trains, switch on electric lights, and use iPhones—all of which constitutes a far greater ‘cultural appropriation’ than the one they complain of.”

Ellis’s approach to education affirms an ideal long at the heart of Western civilization, namely, the paramount importance of counterargument. In a wide-ranging study, we could turn to Cicero, Erasmus, Shakespeare, or J. H. Newman to confirm what the ancients called argumentum in utramque partem. We could trace the salutary power of counterargument in law and the arts. Aware that jargon-laced fashion has replaced serious counterargument on the one-party campus, Ellis cites John Stuart Mill: “He who knows only his own side of the case, knows little of that.” After decades of academic battle, Ellis has learned to advance his spearpoint where it cannot be easily deflected: “If leftist professors think they can fill the gap by presenting the right’s case themselves, Mill has a crushing answer: ‘Both teachers and learners go to sleep at their post as soon as there is no enemy in the field.’” Ellis adds impishly that, since the field is quite empty of enemies, campus radicals need “safe spaces” to protect their indefensible dogmas.

Ellis documents the far-left takeover of academia in grim detail. He cites an abundance of research regarding the diversity regime that emerged following the Allan Bakke decision in 1978. This regime, as Ellis notes, drew support from the expansion of Title IX offices, which were originally designed to support female student athletes. Ellis offers considerable evidence, if anyone wants to see it, that the main beneficiaries of the diversity regime are not minority students. The current educational system is, to a significant degree, invested in their failure. As Ellis writes, “The crux of the matter is that control of the education that should have led to full equality in the mainstream of society is now in the hands of people who loathe the mainstream.”

To follow Ellis’s harrowing line of analysis: the privileged radicals don’t really want the underprivileged to succeed, because, if they do, America must be a pretty good place. The radicals simply cannot admit as much while still demanding a Marxist-style transformation of American society. Education for citizenship was once a recipe for social mobility. Nowadays, if you are not running the show to begin with, you will be made to serve the radical agenda. I cannot disagree with this analysis, but it paints a very bleak picture of human nature and the raw workings of power.

What about the sciences? Unfortunately, by using the intellectual fog of “social justice” for cover, the radicals have infiltrated the realm of STEM learning. “The latest figures,” Ellis writes, “show that STEM fields too are now beginning to appoint almost exclusively leftist faculty.…” At UC Santa Cruz, where Ellis taught for many years, applicants for jobs in biomedical sciences and computers science face new hurdles: “Initial screenings of candidates will be based on statements on contributions to diversity, equity, and inclusion.” For taxpayers, this is a scandal and a swindle.

Before examining Ellis’s proposals for rectifying this catastrophe, we may take time to note his book’s uncanny relevance to our summer of disaster. Ellis finished writing The Breakdown of Higher Education before our republic was shocked by the image of a cop kneeling for eight minutes on the neck of a petty criminal who did not deserve to die. Academia, as Ellis accurately depicts it, could not be counted on to sift through statistical and other evidence regarding the police and racial matters. One result of this general failure (a few exceptions emerged) is that the dangerous movement to defund the police now attracts millions of American citizens even though, if it actually happens, it will doubtless bring great suffering to the very people the militant defunders claim to care about. What is going on here? What happened is closely connected to the radicalized campus. Youth of privilege are willing to sacrifice others to an irrational program of social transformation. This belligerent demographic is, thanks to the radicalized professoriate, impervious to instruction, resistant to facts, deluded about the history of Marxism, fond of wearing uniforms, and equipped to follow orders.

What, then, are Ellis’s ways out of this dead-end? His main prescription is playing hardball. Defund academic departments, shut them down, send tenured professors packing. Some diseases are so severe that we must risk killing the patient. Whether or not we agree to such measures, no sane person can disagree with Ellis’s call for accountability on every level—not just from derelict administrators, but from citizens and politicians who wield the power of the purse. Ellis is surely right that conservatives and liberals should join in common cause against the degradation of college teaching by radicals. Our national will is being tested, and either we will rise to the challenge as a nation, or we will descend further into violent chaos.

The characteristic of Ellis’s mind that worries me is his reticence about religion. He avoids the subject of faith. He never mentions Tocqueville. With a clean conscience, he writes the Enlightenment a blank check. And yet the dark side of Enlightenment is inescapable. It runs from the Marquis de Sade to Auschwitz to the hyper-specialization of knowledge that makes wisdom impossible. Dreher is a Christian critic of the Enlightenment. Ellis is its secular champion. While Dreher proposes a quasi-monastic retreat from the modern world to prepare for persecution, Ellis proposes that we realize secular modernity’s best potential. It seems to me that, if we want to bridge this present moment between our past and our future, Ellis and Dreher are equally deficient. Ellis’s work may have greater relevance, but neither represents the sustaining ideals of Christian civilization.

For Alasdair MacIntyre, by contrast, we must draw on our tradition to answer a challenging, historical reality. The sign of this reality is, of course, endless division. But we may prefer the example of a Christian philosopher who does not want to quit, or to tear things down and start over. MacIntyre aims, instead, at a renewal of high seriousness: at restoring “the crucial relationship between metaphysics and ethics,” and at understanding “human beings as directed toward God.” I see nothing in these aims that the Founding Fathers would object to.

Lee Oser is a novelist and a professor at the College of the Holy Cross.