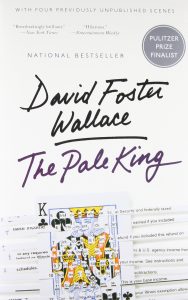 At a certain point you realize that David Foster Wallace is as much a horror writer as Stephen King, and the monsters under his bed are twins: absorption and distraction. Infinite Jest, Wallace’s massive 1996 masterpiece, has as its ouroboros spine the story of a video so absorbing that it destroys the people who watch it. In Jest characters are absorbed by addiction, depression, and the screen-mediated entertainment that is symptom, cause, and synecdoche of both. But they’re also absorbed by tennis and its discipline; friendship and maybe love; and the process of twelve-step recovery, where you’re swallowed up by the old-timer “Alligators” and spend the rest of your life, if you’re lucky, nestled safely in their leathery guts. Jest is about, among other things, how easy it is for our attention to become captured by the wrong things. And attention is the microcosm of the soul.

In The Pale King Wallace returned to this theme. King, published posthumously in 2011, was left as a pile of notes and computer files at the author’s death and arranged into a somewhat schematic but undeniably compelling order by Michael Pietsch, Wallace’s longtime editor. It is about paying attention, the horror of paying attention to the wrong thing, and the search for some possible right thing to attend to—the search for a good absorption. And it is also about a subject the normal person’s attention slides right off of: the assessment principles and procedures of the Internal Revenue Service.

It’s a flamboyant move, self-parodically extreme: “You’ve got to read David Foster Wallace’s unfinished epic about the IRS! I’ll never forget the chapter about sweating.” It’s a novel in which, according to Wallace’s notes, various climactic events are teased but none of them will ever happen. This leaves it as a work of images, portraits, scenes: the impression of teeth left in a desk blotter; a boy obsessed with pressing his lips to every single inch of his own body; a man slowly levitating, unnoticed, as he gives a coworker his undivided attention.

Many sections of the book have a palpable anxiety. The second section gives the internal monologue of Claude Sylvanshine, as he flies to Peoria for a second chance after a disastrous departmental meltdown. Sylvanshine is the opposite of absorbed. Desperate to study for his CPA exam, he finds himself instead buried under mental debris: bad memories, revulsion toward his seatmate, random facts, definitions of yaw and gimble (or is it gimbel?), scraps of accountancy, fits of self-blame—and, of course, miserable fragments of advice on how to focus. This is Hell, basically; it provokes what Sylvanshine calls “Total Terror and Disqualification.” This is distraction, the Scylla to addictive-depressive absorption’s Charybdis.

The center of the unfinished novel, as arranged by Pietsch, is another story of distraction, dissipation, dissolution—but one where the IRS is a haven. Chris Fogle drifted through life until one day he attended an accounting class by mistake. The lecturer, “the first genuine authority figure I ever met,” had good posture; the students’ notes were preternaturally organized. The gallant accounting students have sharp pencils, while Fogle “realized that I almost never had a sharp pencil at hand when I really wanted one.”

The class closed with an extraordinary peroration, at once ridiculous and inspiring:

“I wish to inform you that the accounting profession to which you aspire is, in fact, heroic. Please note that I have said ‘inform’ and not ‘opine’ or ‘allege’ or ‘posit.’ … Exacting? Prosaic? Banausic to the point of drudgery? Sometimes. Often tedious? Perhaps. But brave? Worthy? Fitting, sweet? Romantic? Chivalric? Heroic?” When he paused, it wasn’t just for effect—at least not totally. “Gentlemen,” he said, “—by which I mean, of course, latter adolescents who aspire to manhood—gentlemen, here is a truth: Enduring tedium over real time in a confined space is what real courage is. Such endurance is, as it happens, the distillate of what is, today, in this world neither I nor you have made, heroism. Heroism.”

Fogle, on fire like a rich man who’s just heard St. Francis preach, hurls himself into the IRS with relief and joy. At last, authority! At last, even for me, discipline and focus! At last, something to respond to with my whole being, something to be responsible to; a task which needs doing, and which so few are willing to do.

In the early-’80s world of The Pale King, the IRS is the site of an epic bureaucratic battle between civic ideals and the cash imperative. Should IRS audits focus on punishing major fraud, or on returning as much lost revenue as possible to governmental coffers? In other words, should the IRS turn a profit? The specific speeches in which Wallace presents this conflict struck me as among the novel’s rare weak points, but the conflict itself is part of the novel’s subtlest and most poignant theme: the difficulty of finding something really worth one’s attention.

Fogle’s IRS is a place where workers give the taxpayers the unavoidably toilet-evoking nickname “TPs.” It’s a bureaucracy in which layers of computer kludges mix up two different David Wallaces—including the astonishingly irritating character who purports to be our author, the odd man out in a novel in which even characters who bore, depress, or infuriate others manage to earn sympathy. This IRS is shady, complicit, a pawn in the projects of the United States government. It’s run by a triumvirate known as “The Three-Personed God,” but its headquarters is “Triple-Six,” for 666 Independence Ave. The focus it demands is not only superhuman but inhuman. A brilliant short chapter reads, “Howard Cardwell turns a page. Ken Wax turns a page. Matt Redgate turns a page. ‘Groovy’ Bruce Channing attaches a form to a file”—but hiding in this tedium is a genuine ghost story, about the people whose jobs demanded such unbearable absorption that they can’t stop paying attention even after death. In a brutal punchline, we learn that the man whose hymn to “the Service” lies at the book’s heart is known to his colleagues as “‘Irrelevant’ Chris Fogle.”

Before the word acquired purely negative connotations, “addict” was used to connote service or dedication. The height of addiction was complete, life-altering devotion to something outside oneself; a sixteenth-century translation of the New Testament has Paul call himself “the addict servant & obeyer … of God the father.”

In The Pale King absorption can reshape the body as surely as addiction to drink. Levitation, stigmata, uncanny flexibility are all the result, for these characters, of paying all their attention to one person, whether it’s a woman at a bar, Jesus crucified, or oneself. And yet—paying undivided attention to another person may help her, but not enough. Stigmatics, Wallace writes, receive wounds in their hands, whereas anatomy would require that the nails went through Jesus’ wrists. Attention is all-powerful but these characters find no way to attach it securely to love or truth.