After the Guns Fall Silent 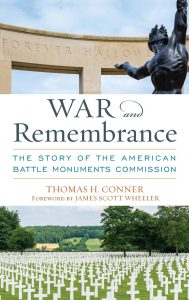 An obscure poem reads like this: “That bullet forever depriving him of seeing again his green and pleasant land …” It goes on to describe how the rural countryside has become mud, marked by “putrid smell.” Comes then the eleventh hour when the guns fall silent.

But the war is not over. One can easily imagine “pale men” appearing from the trenches, “cold shaking and ashen with shock.” They had fought for ideals that are noble, dignified, and lofty, with sacrifice essential.

I have in my own family six great-uncles drafted into that war. I have pictures of them only, but no commentary and thus no remembrance. Reading Thomas Conner’s War and Remembrance, however, has “drafted” me back into my own family history and imaginative interpretations of the service of those great-uncles, and then my father’s World War II service, and that of four uncles, including my father at the Ludendorff Bridge and an uncle at Bastogne.

Every Memorial Day my father and his fellow American Legion veterans would arrange white crosses in the village park, every year adding more crosses. Each corresponded to a name on a brass plaque. During the Memorial Day Service my father would read the list of the dead solemnly. When a name was read, a young person would affix a red poppy to that cross. After the service my father and other Legionnaires would linger. There was one cross in front of which my father would kneel, commemorating Kenneth Guddal, my father’s best friend, best man at his wedding, dead in World War II, and at rest in the Luxembourg-Hamm American Cemetery and Memorial.

There are in that cemetery 118 Jewish soldiers marked by the Star of David, 22 pairs of brothers buried side by side, and one woman, an Army nurse. There are unknowns. And George Patton.

Professor Conner’s book, War and Remembrance: The Story of the American Battle Monuments Commission is as monumental as the title suggests. The research is impeccable, the style precise. The narrative itself is neither maudlin nor emotionally dry. If we are talking about “first things,” the book is prescient inasmuch as it does not ignore the high principles of that part of public life that deals reverently and piously with American war dead, those who are part of bitter historical experience but whose lives must be regarded as part of our public life lest they become unremembered.

One might bookend Professor Conner’s work of military history by recalling—as he does at his book’s conclusion—the opening and closing scenes to Spielberg’s 1998 Saving Private Ryan, filmed above the Normandy beaches. The marble cemetery markers roll by as an unnamed veteran searches. In the movie we come to know his last name is Ryan and that he is fixated on war and remembrance. We are two decades from that fine movie, now a fixed part of our public consciousness.

The chapters of Professor Conner’s fine book detail the process from the time in which the Commission was established following World War I to the 1960s and then suggestive of the present moment.

The book addresses the question of what, first, to do with the gross amounts of World War I dead who had suffered unimaginable terror, and, second, what to do with the nightmarish landscape upon which the battles were fought and upon which so many perished: 116,516 in World War I alone is no mere statistic.

During both World War I and II, the army needed to identify and bury bodies as quickly as possible. This became the purpose of the Graves Registration Service. Often interment was done in nearby shell holes, and often deferred for a week or longer. We know the GRS took great care to mark the graves properly even if the grave was for an “unknown.” Sometimes the grave, far from a primary battlefield, was marked “Isolated.”

Conner explains the formation of the American Battle Monuments Commission in 1923. This independent agency of the United States Government was established to commemorate those armed forces dead who served since April 6, 1917. Its “commission” was to establish suitable war memorials, which included locating burial ground and then designing, constructing, operating, and maintaining those cemeteries. It’s an untold story now properly told by Professor Conner.

He begins in the time between 1918 and 1923. The problem was two-fold: First was the desire of American families to have their war dead at home, the first part of remembrance. The logistics were not only costly but complex and unlike any other war in American history, since the war dead were already interred so far from home.

Second, most of the dead were scattered “among thousands of locations in multiple countries. Fifteen thousand of the dead lay in [those] ‘isolated’ graves, likely to be found anywhere from remote forests to village churchyards and even the gardens of private homes.”

As the guns were silenced, and taps played signaling a time for the removal of the dead, the Commission was faced with a practical problem raised by the final number of American dead: the “sheer cost” involved in repatriating all the American dead home to their families.

This was not merely a line-item in the annual federal budget. The issue was moral. How, then, to carry the financial and moral concerns forward into time reverently and piously. And how to answer the prudential question of interring the dead on the battlefield where they had fallen versus expatriation and interment of the remains in hometown cemeteries. The Commission polled the families and offered those choices without any attempt at persuasion, even though several members of the Commission felt that to repatriate would be similar to “mustering out.” More proper to remembrance would be burial in a cemetery abroad that would be suggestive of the “fallen” still in service.

The selection of General George Pershing as the first ABMC chairman was prescient. As head of the American Expeditionary Forces on the Western Front, this “general’s general” embodied like no other commanding officer the spirit of the American Doughboy. He eschewed politics and remained on active duty for the whole of his life and his concern with the prestige of American forces eventually cemented his sound reputation.

His service was marked by remembrance involving “an organized and centrally supervised program of preservation and commemoration of the overseas battlefields.” General Pershing’s personal knowledge became indispensable to the work of the Commission. Policies needed to be formed, however, to bring under control the “unregulated proliferation of private and non-federal American war memorials on foreign soil.”

The Commission thus created its own historical section with initial duties to clarify American combat sites in France and Belgium. The Commission also articulated a working relationship with the Federal Commission of Fine Arts which would help to determine the architecture of chapels that would be built and the Latin Crosses or Stars of David that would adorn the “graves of each soldier buried in the permanent American cemeteries.”

As might be expected, disputes developed, but the prestige of General Pershing both at home and with America’s European counterparts eventually brought about the establishment of the “sites of memory along the old Western Front.”

It’s here that Professor Conner’s history becomes most poignant. Working with the United States Department of War, the Commission established eight European cemeteries, each with nonsectarian chapels and each sited upon a battle ground. To make a pilgrimage, then, to the Meuse-Argonne Cemetery and Memorial is to find one’s self in the midst of the largest number of American military dead in Europe, 14,246, most of whom lost their lives during the Meuse-Argonne Offensive.

It’s a beautiful but sobering place, the cemetery featuring eight rectangular sections of white crosses row-on-row and two focal points, a reflecting pond and a chapel with stained glass windows depicting American unit insignias. The place is unabashedly religious and is not contradicted by the cemetery featuring a view of the battlefield.

The authority of the Commission does not end with those eight World War I battle ground cemeteries. President Truman “issued an executive order [in 1946] confirming that the ABMC would retain its authority over the World War I sites and direct the nation’s World War II program.”

That later program, 1945–1960, broadly followed the pattern that had unfolded after World War I. The creation and construction of fourteen cemeteries took fifteen years. The Commission’s purpose remained the same under its new chairman, General George Marshall. The logistics again were more than problematic. The numbers of identified and unidentified dead obviously surpassed that of World War I. And since World War II was worldwide, many of the dead were in unlocated isolated graves.

Over time, then, the Graves Registration Service proceeded with the collection and sorting of bodies for either repatriation or burial in an overseas cemetery. At what is known as the Margraten site, for example, “more than seventeen thousand American soldiers had been buried within a year of the end of the war.” When the final disposition of the dead became clear, only then could the exhumations and permanent interments be completed. The Margraten site is now the World War II Netherlands American Cemetery and Memorial covering 65.5 acres where rest 8,301 American dead. There’s a chapel and reflecting pond; at the base of the chapel tower is a sculpture representing a grieving mother.

Professor Conner makes clear in this extraordinary history that these memorials are fitting homes for those who rest side-by-side with their comrades, some known only to God. It’s equally fitting to understand that although dead those interred in these cemeteries are still serving their country. Each of the memorials reverently created by the American Battle Monuments Commission is a grateful remembrance even if it is foreign soil that now gives these dead a home.

They are hallowed grounds.