‘All of time is cut in two’ 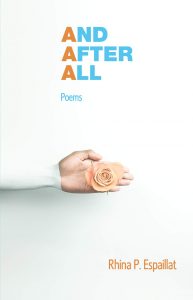 “Without you,” Rhina Espaillat says, “all of time is cut in two.” The best poems in Espaillat’s new book, And After All, are about grief. Espaillat lost her husband, Alfred Moskowitz, in 2016, and in many of these poems grief permeates the varied aspects of life. It’s easy for poems about loss to be sentimental, overwrought, or overly personal, but these poems draw us in through their natural, conversational language; exquisite, restrained formal poetic craft; and indeed, in the real-life emotions that accompany the loss of a spouse after more than fifty years of marriage.

The loss manifests itself in everything. There are the more obvious reminders of him, such as their empty house, “loud with silent echoes/music we made.” Some reminders engender anger at being left behind, such as the photograph where he “waves goodbye with an indifferent hand.” Even in basic objects, Espaillat sees the paradox of everything seeming at the same time exactly the same and forever changed, as shown in the double meaning of the word “still”: “basement workshop, where your tools hang still/ready for use.”

But there are “traps everywhere,” grief hidden in less likely places. In the sonnet “To My Good Left Hand,” Espaillat lulls us into thinking this is simply a poem about trying to use her nondominant left hand. But when we get to the third stanza, the “turn,” addressed to “Apprentice, understudy,” she introduces the idea of another. With the second, revealing “I know” in the last line, this poem about an innocuous subject turns into a cry of loss:

Apprentice, understudy, you who stand
for all who are least likely to make good,
what will you do now that the other hand—
your clever twin—is swaddled still as wood,
with twice the weight of failure left for you?
It’s hard, I know, I know; I’ve been there too.

Espaillat can treat her grief with humor, as in “Condolence Call.” In missing her husband, she misses everything about him, including the way that he teased her about his “Big Blonde” fantasy woman.

I saw her—your Big Blonde—the other day.
Yes, she dropped
in on me, as fantasies
may do, lonely for those who dreamed them up,
and even for the dull realities
like me, who are somehow chosen, preferred,
or settled for.

Espaillat doesn’t ignore all the realities of the love she had: “sweet and sour together: / work, children, quarrels, losses, pleasures, slights.” She knows that it wasn’t all perfect:

Love’s not blind: it sees what is,
she thinks, but turns from it, waves it away,
plays dumb on purpose.

She expresses real anger at times, using the line break after “you” in the poem “Album” to capture an accusatory tone and her resentment:

And you,
absent everywhere else, seem to have let
yourself be led away, as if some debt
to them outweighed your living vows to me.

But what grieves the poet perhaps more than the loss itself is the idea that her grief will pass, that she will forget him. She sees this forgetting presaged in the “sharpened shears he plied”: “No thing remembers him. / How difficult to bear.” She concludes the sonnet “Traps,” with an aching couplet about her memories: “Each is at once a blessing and a curse. / And when their ambush ends, that will be worse.”

Espaillat’s poems mourn other losses as well. In “Things That Go,” the poem starts as a simple rhyming litany of things that literally move, and surprises us with other things that have gone from her life:

Hoop and arrow,
wheel and dart,
kite and rocket,
stream and heart;

suns that burn
and rains that weep;
children you once
rocked to sleep.

Espaillat writes about memory as loss but also as continuity, as in her description of water from her father’s house, “the varicolored silk of tropic rain / we drew out of the rusty spigot, skein / after skein.” Her memories reach both into the past and the future, a story that continues while being made up of individuals who come and go and are forgotten—“an endless chain whose links cannot endure.” Her mother, father, grandmother, and many nameless relatives are all here, and she sees herself as taking her place among them, under no illusions about the fact that one day she’ll be one of those nameless faces:

one day this will be you
a woman staring through
film at which strangers stare.
You will not see them there.

The future is also part of this chain. In “‘Home is the place where …’,” she talks about those “who are already mine, though still to come.” Her grandchildren populate these pages too, where the poet just becomes “Grandma, who provides crackers and cheese” to a spaceship “ably captained by its two / commanders,” the next generation who will continue the journey and the endless chain.

There is poignancy in And After All, but there is harshness too. Espaillat doesn’t pull punches with those who have hurt her friends or family. In a response to someone who has attacked her for being Jewish based on her husband’s last name, she answers: “I was not born to what he thinks that “shame,” / but claim the right to share it as my due: / the hate that aims it makes me wish it true.” Even friends whom she loves come in for a gentle scolding. In “Believer,” dedicated to the Catholic poet Tim Murphy, who was a good friend of Espaillat’s, she gently rebuffs his conversion attempts:

My friend insists he wants me to be saved.
He argues that my soul will come to grief
unless it’s rescued from my unbelief
by Jesus—though I’m fairly well-behaved …

The masterpiece to all that has gone by is the ballade “Too,” a taking-stock poem set on New Year’s Eve, when we look back on everything we did or meant to do in the past year. Espaillat enlarges the thought to everything one meant to do in a life. She makes this difficult form, with its strict, limited rhyme scheme, seem perfectly natural, and its repeating refrain gives it an incantatory tone:

Too many books meant to be read, unread
on shelves youth stocked when it believed it might;
too much meant to be said but left unsaid
that wanted saying when the time was right;
too much said wrong, too much held close and tight
that should have been let go, have been largesse
flung free at once and never kept from flight.
And too late now to wish it any less.

The envoi, the last four lines, typically addressed to someone, is fittingly spoken to not quite herself but a reflection of her self, “Face in the mirror,” the only person left on this cold night:

Face in the mirror, reading by cold light
the lines that spell your history, come bless
what one more year decrees this final night.
Much too late now to wish it any less.

But that is not the last poem in the volume. Humorously, the second-to-last poem is called “Signing Off,” and yet there is still one more: “The Bargain”:

“Well, aren’t you all heart,” I said. “One hand
makes off with the silverware, and then
the other opens to lend me back again
one plastic teaspoon. I don’t understand.”

“I’m not such a bad sort,” Time said, “you’ll see;
but this last offer won’t be good forever.
There’s so much to reclaim: more bonds to sever,
lights to put out, and speech, and memory.
Trinkets you’ll need before I strip you naked.
Do reconsider.” And I said, “I’ll take it.”

And that is the true Rhina Espaillat. She leaves us with herself, grief-stricken and angry, clutching what may feel to her at the moment like “one plastic teaspoon,” but still willing to go one more round with whoever it is that’s dealing out the punches.

Midge Goldberg’s reviews have appeared in Claremont Review of Books and Per Contra, among others. Her poetry has been published in many journals and anthologies, including Measure, First Things, and on Garrison Keillor’s A Writer’s Almanac. She is the author of two books of poetry, Flume Ride and Snowman’s Code, which received the Richard Wilbur Poetry Award. She was also the winner of the 2016 Howard Nemerov Sonnet Award and the New Hampshire Literary Awards Readers’ Choice Award. She lives in New Hampshire with her family, two cats, and an ever-changing number of chickens.