All the History That Fits a Narrative 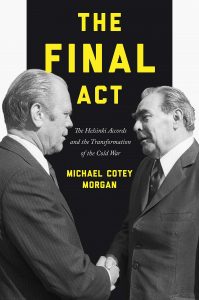 The Final Act: The Helsinki Accords and the Transformation of the Cold War
by Michael Cotey Morgan,
Princeton University Press, 2018.
Hardcover, 424 pages, $35.

People have a tendency, when they expend much time and energy working on a project, to inflate the significance of their work. We all like to believe the work we do is important. Authors and historians are no different from the rest of us in that respect. That phenomenon is the major flaw in Michael Cotey Morgan’s book about the 1975 Helsinki Accords, The Final Act.

Morgan’s extensively researched account of the varied approaches undertaken by the United States and its European allies, the interplay between the Soviet Union and its East European satellites, and the diplomatic jousting between East and West in the Conference on Security and Cooperation in Europe (CSCE) is well written and informative. Had he written a straightforward and detailed history of the CSCE and the Helsinki Final Act, without attributing to them the transformation and end of the Cold War, this would be a good book.

The author’s fundamental error in The Final Act is his apparent belief that ideas trump geopolitics. The Helsinki Accords were about ideas and concepts—inviolability of frontiers, territorial integrity, peaceful settlement of disputes, non-intervention in internal affairs, respect for human rights, scientific cooperation, freedom of emigration, cultural exchanges. Thirty-five nations signed the accords. As Morgan admits, the Final Act was a political not a legal document. It bound no nation. Yet the author equates it with the Treaties of Westphalia (1648), Utrecht (1713), Vienna (1815), and Paris (1919). Others, however, including the great analyst of Soviet communism James Burnham, compared it to Yalta (1945).

Burnham understood the Soviet Union and geopolitics. The Helsinki Accords, he wrote in a column for National Review, legitimized Soviet control of Eastern Europe. It made a mockery of the U.S. rhetorical support for the “captive nations” behind the Iron Curtain and reinforced the Brezhnev Doctrine, which proclaimed that no country could leave the socialist camp. Yet Morgan writes that the Final Act helped undermine the legitimacy of Soviet rule and the Brezhnev Doctrine.

Burnham wrote about the Brezhnev Doctrine in 1964, long before Brezhnev announced it. Soviet leaders, he wrote, divided the world between the Zone of Peace, the Soviet sphere of influence that was off limits to Western penetration, and the Zone of War, the rest of the world that was fair game for Soviet expansion and infiltration. The Final Act, as even Nixon recognized, did nothing to upset the Brezhnev Doctrine.

In 260 pages of text, Morgan allows only a few paragraphs for the Final Act’s other critics, who included Raymond Aron, Margaret Thatcher, Alexander Solzhenitsyn, Robert Conquest, George Kennan, and Ronald Reagan. He also notes that neither Nixon nor Kissinger thought that the CSCE or Final Act were in any way transformational.

Morgan accurately ties the Final Act to the West’s overall policy of détente towards the Soviet Union. Détente, he rightly notes, had several forms, including the Nixon-Kissinger version, the Ostpolitik of West Germany’s Willy Brandt, and the “interpenetration” of France’s Georges Pompidou. The Helsinki Accords were a product of détente, and Morgan believes that détente as practiced in the 1970s, and the Soviets’ response to détente, ended the Cold War on terms favorable to the West.

Détente’s geopolitical record is quite clear, though you would not know this from Morgan’s book. During the West’s policy of détente, the Soviet Union helped the North Vietnamese defeat the United States and conquer South Vietnam; sent Cuban and East German proxy forces to Africa; threatened to intervene in the Yom Kippur War; gained allies in Nicaragua and the island of Grenada; engaged in a massive conventional military and nuclear build-up (including the deployment of intermediate range missiles in Europe) that threatened America’s extended deterrent; invaded Afghanistan; clamped down on Jewish emigration; and continued to imprison political dissidents in psychiatric wards and the Gulag.

While all of this was happening, Western nations, including the United States, reduced defense budgets and engaged in arms control agreements that favored the Soviets. Defense Secretary Harold Brown explained the different U.S. and Soviet approaches to arms control: “When we build, they build. When we stop, they continue to build.”

Domestically in the United States, détente’s failures led to the formation of the Committee on the Present Danger, a bipartisan group of defense experts that issued dire warnings about the growing Soviet threat. One of the Committee’s members, Ronald Reagan, became President in 1981, in part because of the failures of détente.

Morgan mentions none of this history. It doesn’t fit his narrative.

The geopolitics of the 1980s is also entirely missing from Morgan’s history. The Reagan administration’s abandonment of détente and its replacement by a policy of “rollback” or liberation goes unmentioned, despite the existence of unclassified National Security Directives that reveal a U.S. policy to undermine the Soviet Empire. Morgan fails to mention U.S. aid to the Afghan rebels and the Contras in Nicaragua, Reagan’s coordination with the Vatican to ensure the survival of Poland’s Solidarity Union, or the forcible liberation of Grenada as part of what Charles Krauthammer called the Reagan Doctrine. He fails to mention the U.S–Saudi use of the oil weapon to pressure the Soviet economy, or Reagan’s massive military buildup that further stretched Soviet resources to the breaking point.

Instead of giving credit to Reagan and his policies, Morgan credits Soviet leader Mikhail Gorbachev for imbibing the ideas of the Final Act and peacefully ending Soviet control of Eastern Europe. “Gorbachev’s core commitments,” he writes, “reflected Western values.” “A new set of precepts now guided Soviet policy,” Morgan continues, “the freedom of people to choose their own political systems, the renunciation of force, mutual respect between East and West, and nuclear abolition.” Gorbachev, the author claims, brought Soviet policy “into line with the Final Act.” Reagan, it seems, had nothing to do with it.

It is true, as Morgan notes, that Western leaders paid lip service to the Helsinki Accords in managing the end of the Cold War after the fall of the Berlin Wall. But it was geopolitics, not the Final Act, that determined the end game.

Francis P. Sempa is the author of books including Geopolitics: From the Cold War to the 21st Century. He is an attorney and an adjunct professor of political science at Wilkes University.