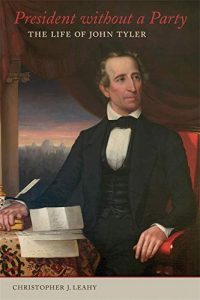 One cool February night in 1845, two weeks prior to the inauguration of recently elected president James K. Polk, a festive mood permeated the White House. Washington society had turned out for the final ball of the John Tyler presidency, and the president—who had been expelled from the Whig Party just three years prior—was oddly jubilant. The House of Representatives had recently approved the joint resolution to annex Texas, and the Senate was scheduled to do the same in nine days (which it did 27–25). As the party wrapped up, a smiling John Tyler remarked, “They cannot say now that I am a President without a party.” Today, Tyler exists in the public memory as half of “Tippecanoe and Tyler Too,” and to a lesser extent as the president who fathered fifteen children (with one grandson, Harrison Ruffin Tyler still with us at the moment of this writing). Christopher Leahy, Professor of History at Keuka College, provides a much-needed corrective in his new biography, President Without a Party: The Life of John Tyler.

Recent works such as Edward Crapol’s John Tyler, The Accidental President and Dan Monroe’s The Republican Vision of John Tyler focus respectively on Tyler’s foreign policy accomplishments and political philosophy, and the standard full treatment of his life was published in 1939. Relying in large part on the abundant correspondence Tyler left behind, Leahy reveals a man much more ambitious and cunning than is generally portrayed. Born in 1790 into one of the First Families of Virginia (descendants of those who settled in the colony in the first half of the seventeenth century), Tyler inherited a sense of duty and service from his father. He also absorbed his father’s political philosophy of Jeffersonian or Old Republicanism which was made up in part of devotion to states’ rights and a strict constructionist interpretation of the Constitution. Leahy makes clear that while Tyler was never an ideologue, “When faced with difficult decisions, he usually returned to the Old Republican principles he had inherited from his father.”

Leahy argues that three characteristics are essential to a fuller understanding of John Tyler: his southern identity, his addiction to politics, and a “masterful sense of timing.” That sense of timing was at least partly responsible for elevating Tyler to the highest office in the land. Leahy notes that Tyler was not just the beneficiary of good luck throughout his political career, but that he maneuvered to be in the right place at the right time. Like a good republican, he never openly expressed his ambition, but Leahy makes clear that throughout his political career he aspired to the presidency and to greatness. The Whigs, looking for a southerner to pair with nominee William Henry Harrison, settled on Tyler. In the famous “Log Cabin Campaign” of 1840, he stumped on behalf of Harrison, though carefully concealing his skepticism of Harrison’s nationalist leanings. “Tippecanoe” defeated Democratic nominee Martin Van Buren, but Tyler had little time to adjust to the vice-presidency. One month into his term, Harrison died, the first president to die in office. The relatively young nation—and Tyler—were now confronted with the realization that the Constitution was somewhat unclear about what should happen next.

Arguably due to the sense of public service instilled in him from youth by his father, Tyler refused to panic. While some scholars have criticized his interpretation of Article II, Section I of the Constitution, Leahy contends that by claiming that the full powers and duties of the office had fallen to him, he “staved off a possible constitutional crisis that could have clogged the wheels of government and undermined the authority of the executive branch.” Leading Whigs such as Henry Clay and John Quincy Adams expected him to act as a kind of regent or acting president, but Tyler had no intention of undermining his own authority. A weak executive was a central tenet of Whig philosophy, but President Tyler asserted executive power over the next four years (much to the chagrin of his fellow Whigs).

To what ends did Tyler exercise what he believed was his rightful power as president? Often, he acted to thwart the desires of the majority his other Whigs held in Congress. He stymied attempts to implement the Whig program such as chartering a third national bank (the second version having been killed off by Whig arch-nemesis Andrew Jackson), and in the process incurred the wrath of many a Whig. After his veto of the first congressional Whig attempt to charter a national bank, a drunken mob of enraged Whig partisans descended on the White House lawn and burned him in effigy. Yet public denunciations and subsequent attempts by Whig leadership to corral his impulses did little to curb his independent streak, and he was formally expelled from the party. A less ambitious fellow might have meekly accepted his new lame duck status, recognizing that he now had no party to call his own. Tyler was not meek, and he had no desire to return to his estate. Eager to secure his legacy, he pursued Texas annexation during his last two years in office

Texas annexation exacerbated sectional tensions over the spread of slavery at a time when the nation could ill afford it. On the one hand, Tyler decried the crisis of the 1850s, writing at one point, “I fear a great and permanent alienation of feeling between the sections.” But his love for the Union was superseded by his identity as a southern slaveholder. He professed a distaste for the inflammatory rhetoric of the Fire Eaters, served as president of the Virginia Colonization Society (which supported the establishment of colonies in Africa for free black Americans), and publicly held the position that slavery was more of a necessary evil whose end was hopefully at some point in the future (but not so close that it would affect him).

But his response to the weakening of the Union and the strengthening of abolitionist rhetoric was to grasp slavery and his southern identity ever more tightly. Even before Virginia made the decision to secede, Tyler publicly embraced secession. And when the opportunity arose to serve in the Confederate Congress, his addiction to politics prevailed yet again. As Leahy writes, “Tyler’s decision to join the Confederate government is best understood as the product of what may properly be described as his tragic flaw: an all-consuming ambition and a desire for political fame.” He died in January 1862 at the age of seventy-one, and Confederate president Jefferson Davis ordered his body be allowed to lie in state in the Confederate capitol. No honors were forthcoming from the United States, and the ambitious man so consumed with crafting his legacy was soon forgotten by the nation he betrayed.

Brian Cervantez is an assistant dean at a community college in Fort Worth where he resides. He is the author of Amon Carter: A Lone Star Life.