An Architect for all Purposes

Ralph Adams Cram was a man of such prodigious talents that even two volumes of biography, this and Shand-Tucci’s earlier Boston Bohemia 1881–1900, each weighing in at over 500 pages, can hardly do him justice. Cram, born in Hampton Falls, New Hampshire, in 1863, rose to become one of America’s greatest Gothic Revival architects, though as Shand-Tucci shows, he did important work in many other styles besides. Cram’s achievements extended far beyond architecture, however: He was a fine, and controversial, essayist; a novelist (Gothic, of course); a co-founder of Commonweal magazine, though Cram, a High Church Anglican, never became a Roman Catholic; also a co-founder in 1925 of the Medieval Academy of America and its journal, Speculum; and he was responsible for the first wide publication of Henry Adams’s Mont St. Michel and Chartres, which Adams had been reluctant to put into print. “If the world owes me anything for what I have done,” Cram wrote in his 1936 autobiography, “ . . . it certainly does so for my having been able to act as agent in making available to the public this great and singularly distinguished work.”

Shand-Tucci organizes this daunting curriculum vitae into four themes, the four quests of the book’s title. The medieval quest refers both to the blossoming of Cram’s reputation as Gothic architect and to his longing for a pre-Reformation Christianity. (Cram found some satisfaction for that longing, and for longings of a different sort, among the monks of Caldey Abbey off the coast of Wales.) Cram’s ecumenical and modernist quests were an outgrowth of his broad church and High Church inclinations: in his ecumenical quest, he took a keen interest in liturgical reform in both Anglican and Roman Catholic circles, eager to see Mass celebrated more often and with the laity closer to the officiant—he disliked rails—without diluting the dignity of the service. A tall order, to be sure, and Cram had equally lofty ambitions for his architecture: to be traditionalist without being antiquarian, to be modern without being rootless. Shand-Tucci captures the spirit of Cram’s modernist quest with a quote from the man himself:

Shall we restore a style? . . . Shall we recreate an amorphous medievalism and live listlessly in that fool’s paradise? On the contrary . . . We are retracing our steps to the great Christian Middle Ages, not that we may remain, but that we may achieve an adequate point of departure: what follows must take care of itself.

The medieval, modernist, and ecumenical quests blended in Cram’s ecclesiastical architecture—his design for the still unfinished Cathedral of St. John the Divine in New York, for example, which is perhaps his maximum opus. “He designed as much for ceremonial drama as for musical acoustics” in his cathedral architecture, Shand-Tucci notes. Modern materials could have a place in august Gothic designs, Cram believed. Atmosphere was of paramount importance in his non-ecclesiastical designs as well: in his Collegiate Gothic work on the campuses of West Point and Princeton, for example, or his neo-Georgian plan for Sweet Briar College in Virginia, complimented by one scholar as “a design more pleasing, lighter and freer than Jefferson’s work” at the University of Virginia. Cram’s range was considerable. In the 1920s and ’30s, his firm Cram and Ferguson were “Boston’s most successful Art Deco practitioners,” and Shand-Tucci argues persuasively that these buildings were probably not mere “‘office work’ in which Cram himself was unlikely to have been much involved.” 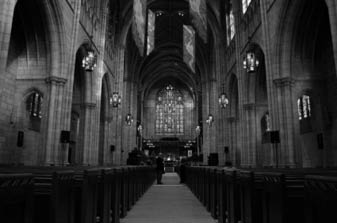 Cram’s American quest may seem, at a glance, to stand apart from his medieval, modern, and ecumenical interests. Shand-Tucci variously considers calling this Cram’s liberal quest or conservative quest, since it focuses on his political thought and that thought is hard to characterize. Cram was a man of the Old Right, a critic of mass democracy and a kindred spirit in many ways of Albert Jay Nock, the aristocratically minded libertarian writer whose view of mass man’s lowly level was crystallized by Cram’s 1932 American Mercury essay, “Why We Do Not Behave Like Human Beings.” “We do not behave like human beings because most of us do not fall within that classification,” Cram concluded, noting that only a handful of historically exceptional individuals haven risen above the mass of mediocrity and savagery. “What kinship is there between St. Francis and John Calvin; the Earl of Strafford and Thomas Cromwell; Robert E. Lee and Trotsky; Edison and Capone? None except their human form. They of the great list behave like our idea of the human being; they of the ignominious sub-stratum do not—because they are not.”

Cram’s doctrine was not as misanthropic as it might seem: He valued the herd of humanity as both precious in the eyes of God and as the seedbed from which the truly human few could arise. But he rejected egalitarianism, presentism, and the thesis of evolutionary progress; civilization’s “standard of today is no whit higher than that which obtained in the Middle Kingdom of Egypt, Periclean Athens, the Byzantium of Justinian or the Europe of St. Louis,” he averred. Not only Nock, but even figures as far apart as Ayn Rand and Russell Kirk exhibited Cram’s influence. In contrast to all these figures, however, Cram actually approved of Franklin Delano Roosevelt. Cram agreed with the comparisons others on the Old Right drew between Roosevelt’s New Deal and Mussolini’s Fascism, but Cram didn’t think the similarities entirely a bad thing. In 1934 he looked forward to a new political order, “Anglo-Democracy,” that would “be a democracy of status and of diversified function, under an hierarchical, not an egalitarian system of organization. In a word, it will be conditioned not by the quantitative standard but by the qualitative standard.”

Shand-Tucci’s chapter on Cram’s politics and legacy in political philosophy is outstanding, all the more so considering that Shand-Tucci is more interested in the religious and architectural themes in Cram’s life—and in Cram’s sexual orientation. Cram married in 1900, and the union, which ended with his death in 1942, produced three children. But Cram’s homosexuality is not in much dispute. Shand-Tucci, himself a gay man, draws heavy connections between Cram’s sexuality and his sensibilities in religion and art. Caldey Abbey appealed to Cram, Shand-Tucci believes, not only for its Anglo-Catholic orientation—the abbey eventually became Roman Catholic—but for the barely concealed homosexual culture of Abbot Aelred Carlyle’s island monastery. Shand-Tucci is on solid ground when he places Cram’s sexual, aesthetic, and religious sensibilities on the same map as those of Oscar Wilde, J-K Huysmans, and Frederick Rolfe (“Baron Corvo”), but he goes overboard with ghastly sub-Freudian sexual symbolism in several passages, including one detailing metaphorical “sex in the liturgy.”

This book was in need of a good editor, not only to rein in Shand-Tucci’s rhetorical excesses (grammatical ones, too—exclamation points abound by the bushel) but to correct dozens of typographical errors: To name a few, Huysman’s infamous novel A rebours is called A rebais, the historian Charles Hamilton is called Charles Hammond, and Isabel Paterson’s surname picks up a second “t.” Nevertheless, Ralph Adams Cram: An Architect’s Four Quests is an impressive work of scholarship, rich in path-breaking research into Cram and his time. The book fails to discuss Cram’s writings at as great a length as they warrant, but that simply leaves an opening for future biographers. For now, Shand-Tucci’s two volumes are his definitive biography, and they provide invaluable insight into the Protean achievements of Cram.

Daniel McCarthy is a contributing editor to the American Conservative.