An Artist in History 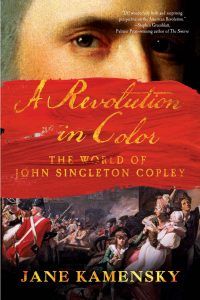 Much as honesty forces the admission that they are not of equal aesthetic quality, the works of John Singleton Copley epitomized late colonial and early revolutionary Boston as definitively as those of Gian Lorenzo Bernini and Anthony van Dyke did, respectively, baroque Catholic Rome and the royal court of England’s King Charles I. Nobody who has made a study of the founding of the United States can fail to recognize Copley’s depictions of Samuel Adams and Paul Revere. His paintings of such other prominent figures of the age as John Adams, Sir Francis Bernard, General Sir Thomas Gage, John Hancock, and Joseph and Mercy Otis Warren are, similarly, both standard artistic representations of their subjects and fine works of art. His Death of Lord Chatham in the House of Lords is among the most classic representations of that government body, and one whose number of historical personages has rarely been exceeded within a single painting. But the truly remarkable accomplishments of Copley go beyond the quality of his art and the way in which it has come to visually define the age in which he created them. Their much larger scope is revealed in A Revolution in Color: The World of John Singleton Copley by Harvard history professor Jane Kamensky.

Few artists whose achievements can be compared to those of Copley—and perhaps none of those artists by whose works his were excelled—were even a fraction as self-educated in their craft. Although born in 1738, Copley did not travel outside of North America until 1774. In fact he had, before that year, rarely been far from Boston. Whereas most artists’ training at the time typically centered on a study of works by the great Renaissance and baroque masters, Copley never encountered a single such original painting until after he had both immortalized the Massachusetts of the 1760s and early 1770s, and had become a regular contributor to the exhibition held annually in London at the prestigious Royal Academy. During his formative years as an artist the closest he came to making a study of first-rate works of art was in studying engravings and prints modelled on them. European artists-in-training did, it is true, themselves have to rely in no small part on inferior quality copies, but this was largely to attain a somewhat supplemental familiarity with a greater number of works. All of the European centers of culture in which prospective artists studied were filled with paintings of the finest quality, owned by patrons happy to allow young talent to have access to them. Some original works by the copied artists were also commonly available, and could be used as a lens through which to interpret the latter.

Isolation from the great paintings of artistic history was not the only handicap that Copley was able to overcome. Though not entirely self-taught, Copley never had the opportunity to serve as an apprentice under an accomplished member of his chosen field but was limited to learning the bare rudiments from Boston engravers. Books and correspondence with artists working in London provided him with what advanced guidance he was able to obtain. And not until he was able to ship his work across the Atlantic could he benefit from anything like expert appraisal of it. Copley had no master to give live demonstration of technique or to observe and correct his own. No master to analyze his painting on a daily basis. No master with whom he could probe the most precise questions of method and of aesthetic theory. Only a man of truly rare talents could overcome such obstacles to become a leading artist of his age and a notable figure in artistic history.

When Copley finally did travel across the Atlantic his very real intention to study the art of the old world was only a secondary motivation, though the one he did his best to publicize to his fellow colonists. His primary reason for leaving his home was avoidance of the war that had become almost inevitable following the Boston Tea Party and the passage of the Coercive Acts. Like most inhabitants of British North America, including most who were to become loyalists, Copley had initially been critical of taxation of the colonies by king and parliament. As attitudes hardened he became increasingly critical of what was turning into a revolutionary movement. Of an apolitical disposition, Copley was by nature inclined to prefer a royal government that required only passivity rather than an opposition that demanded at least a show of active support. Not only loyalists but many who came to support independence held in abhorrence the radicalism of the Boston Sons of Liberty and the mob violence with which they enforced their agenda. Copley’s own father-in-law, Richard Clarke, was a merchant and royal official whose physical safety had been endangered and whose home had been destroyed. Where men such as Benjamin Franklin and George Washington had welcomed steps the British government had taken toward reaching a modus vivendi, hoping for a return to the status quo ante Stamp Act, Boston radicals had feared that reasonable compromise would destroy support for the more extreme objectives of their movement and so had worked to reignite tensions.

For the better part of a year after his departure from America Copley traveled through France and toured Italy. During an extended stay in Rome he learned of the outbreak of the fighting he had feared, at Lexington and Concord, and of the besieging of his home city. Much money could be made painting officers during wartime if one were in a location far enough from the front lines to be free of its privations, yet close enough to them to have a regular military presence. Copley’s own career had largely taken off under such circumstances during the French and Indian War. But with Boston a precarious garrison town it would have been professionally disastrous for Copley to return, regardless of his political views. He settled for what he still hoped would be an indefinite rather than permanent move to London and transitioned into a second phase of his career, in which he attained the dubious distinction of becoming perhaps the only significant artist whose work declined in quality after making a study of works created by his most illustrious predecessors.

During the first phase in his career, Copley painted intriguingly beautiful works in a style both unique to himself and entirely typical of the aesthetic and culture of New England. Following his move to Europe he first turned, in most of his work, towards a closer approximation of Renaissance classicism and then to an embrace of the Grand Manner typical of late eighteenth century England. At best the result was painting that equals his earlier work in its aesthetic quality but lacks the individuality and the colonial American characteristic that make the creations of his “American phase” so attractive. In the worst cases they manifest the exaggerated and grandiose idealization advocated by Sir Joshua Reynolds.

Greater continuity can be seen in Copley’s political views. Reconciliation within the British Empire having become impossible, the artist became one of the first prominent figures to advocate the close friendship between the United States and the United Kingdom that was to become a reality in the twentieth century. He was always anxious to meet—and, of course, to paint—visitors from the new republic, coming to know some of its first diplomatic representatives in London. His portrait of John Quincy Adams is both one of the few of Copley’s later works in which he returned to his earlier style and one of the few depictions of the sixth president as a young man. That in time Copley became known as one of the first major American artists is a fact that strangely combines the ironic with the appropriate.

Kamensky’s account of Copley’s life is a valuable contribution to our understanding of three different aspects of American history: early American art and culture; the lack of rigid political divisions among colonists in the decade leading up to the Revolutionary War; and the extent to which the lives of colonists remained dominated by the ordinary practices of day-to-day life as the events that led to independence unfolded.