An Imitation of Christ 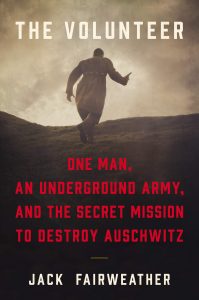 The Volunteer: One Man, an Underground Army, and the Secret Mission to Destroy Auschwitz
by Jack Fairweather.
Custom House, 2019.
Hardcover, 528 pages, $29.

If you have heard of Witold Pilecki, odds are you know him as “the man who volunteered for Auschwitz.” His life embodies one of the greatest instances of twentieth-century heroism. Officially suppressed under Polish Communism, his story still remains largely unknown in the West. Jack Fairweather’s The Volunteer is an important step in bringing this exemplary case of heroic virtue into Western consciousness.

Rotmistrz (Captain) Witold Pilecki—soldier, gentleman farmer, intelligence agent, and resistance leader—was born to a Polish family in the Russian Empire in 1901. In 1919, Witold enlisted in the Second Polish Republic’s newly formed army to serve in the Polish-Soviet War. Farm and family defined his life during the interwar years. He responded to the demands of duty in late August 1939 and met the German September invasion on the front line. Following surrender, Witold thrust himself into underground work and formed an early resistance organization in Warsaw. As prisoner round-ups intensified, more and more were being funneled into Auschwitz. The underground sensed an urgency to figure out what was happening inside and Witold was considered the best fit for the assignment, but he could not be forced into the mission; he had a family to consider. After some days of reflection, Witold knew he had to volunteer. He slipped into a dawn round-up on September 19, 1940. Two days later he entered Auschwitz.

Witold spent the next two years, seven months, and five days as a prisoner inside Auschwitz, witnessing and suffering its horrors, organizing underground activities within the camp, and smuggling out intelligence reports. Under cover of morning darkness in late April, 1943, Witold escaped with two other prisoners. He later took up arms in the 1944 Warsaw Uprising and was captured, returning as a POW to a German camp.

Released at the end of the war, Witold joined anti-Soviet underground efforts to combat Poland’s new tormenters. Communist authorities soon took notice. The secret police arrested him in May 1947 and brutally tortured him. Over the next seven months, Witold was interrogated over 150 times. “Auschwitz was just a game compared to this,” Witold told his wife at his show trial in March 1948. Days later he was sentenced to death, and executed by a bullet to the back of the head. Witold’s final resting place remains unknown.

Fairweather opens his narrative history with an epigraph quoting Thomas à Kempis. But Witold Pilecki’s relationship with Thomas’s fifteenth-century devotional goes further than the biography ever directly reveals; the epigraph is the book’s only reference. Despite the many praiseworthy elements in Fairweather’s historical reconstruction of Witold’s life in Auschwitz and later—a meticulously sourced and compelling account—the biography lacks proper contextualization for his patriotism and courage. Fairweather dwells on Witold’s motivations on several occasions, and draws attention to the hero’s patriotism as his commanding inspiration. In a concluding paragraph, he writes, “Witold’s patriotism furnished him with a sense of service and a moral compass that sustained his mission in the camp.” This leaves us with an incomplete picture.

In fact, Polish patriotism was part of a more encompassing motivation. Witold’s embrace of sacrifice was deeply rooted in a Christian account of the virtuous life. To best understand this hero, one should look to Thomas à Kempis’s book. Speaking with his wife, Maria, for what would be the last time before his execution, Witold asked her to read and teach The Imitation of Christ to their two children, in hopes of passing down the principles in which he had found inspiration and strength. Fairweather does recount the moment Witold refused to beg for forgiveness during his show trial. After nearly a year of torture, imprisonment, and a mockery of judicial procedure, he told the Stalinist judge, “I tried to live my life in a such a fashion so that in my last hour, I would rather be happy than fearful.” Those words of courage were also words of piety, paraphrasing Thomas’s teaching in the Imitation: “Try to live now in such a manner that at the moment of death you may be glad rather than fearful.” To understand how Witold was able to not only lead a resistance network from within the walls of Auschwitz, but consistently lead a life of sacrifice and courage at every turn, one must consider his witness as an imitation of Christ.

“If you wish men to bear with you, you must bear with them,” Thomas teaches. Fairweather describes a moment, days into his time at Auschwitz, when Witold was taken aside by a German kapo, beaten with a cudgel, and assigned the role of room supervisor. He was handed a club to wield over his fellow prisoners. But Witold’s repeated restraint from dispensing physical punishment soon won him hard labor, intended to goad him into inflicting a level of cruelty the functionaries deemed acceptable. A day after returning to the block, Witold tried to cover for three sick men who could not work that day. When the kapo was informed of this, he stormed the room to find two of the men lying down and the third kneeling in prayer. The sight of the praying prisoner sent the block’s kapo into a screaming fit, beating the prisoners and expelling Witold permanently from the relative comfort of his position. Fairweather writes,

… how could he expect to lead others in the camp if he allowed himself to be compromised? The squads had already left for the day, so Witold joined the rejected invalids from the hospital for punishment drills in the square.

Days later, Witold was subjected to a particularly cruel group activity at the direction of a another kapo: hopping like a frog until the overseer ordered otherwise. His bare feet were soon bleeding but he kept jumping, pausing only when another prisoner fell with exhaustion. Those who fell were beaten to death by the functionaries, who mocked the dying. Witold could have given in to the order to spare himself, or rationalized it as a necessary evil to preserve his covert mission inside the camp. But he did not. He maintained the constant and firm will that made just action toward others possible. This characteristic adherence to right reason would prompt a fellow prisoner and collaborator to say “I count only on you, sir.”

“All human glory, all temporal honor, all worldly position is truly vanity and foolishness compared to Your everlasting glory,” Thomas prays in the Imitation. After Witold’s escape from Auschwitz, he began to draft a more comprehensive report on the structure and organization of the camp, supplementing the intermittently smuggled intelligence. He desperately hoped to convince the underground to support an uprising within the camp that would be coupled with an attack from outside. Any hope for such action was dashed in summer 1943 as turmoil gripped underground leadership. Witold received no reply to his request, but learned that the leadership was “very favorably disposed” to award him a medal. “Witold threw the letter away in disgust,” Fairweather writes. Witold’s distaste for vanity was such that “He didn’t want a ribbon. He wanted action.”

This vignette, among others in The Volunteer, exemplifies Witold’s soldierly attitude toward vanity—rejection of glory and honor because it would bring dishonor to seek them while poor souls still cried for mercy. He found glory in adversity and his commitment remained uncorrupted.

“Realize that you must lead a dying life; the more a man dies to himself, the more he begins to live unto God.” Throughout the Imitation, the faithful are directed to embrace the cross because it is both unavoidable and the surest pathway to salvation. More than any single event or vignette, the entirety of Witold’s life habitually reflects this understanding. To partake in eternal life, Witold embraced the cross at every turn, rejecting comfort for suffering. When rediscovering relative peace in the company of his family following his escape from Auschwitz, Witold could have chosen to fall back after the suffering of the past few years. Instead, he chose again to embrace the cross as the post-war Communist occupation approached. Fairweather impresses this upon the reader:

How could he tell Maria that their future was once again postponed? But as he had always done, he chose nation over family. He took the oath and swore in the name of God and Poland to fight to the death if need be.

Witold consistently led a dying life, unapologetic until his dying breath, leaving little doubt that he had cultivated fortitude of the highest degree. Through the nourishment of the Imitation, Witold intimately understood that “[t]here is no salvation of soul nor hope of everlasting life but in the cross.” So the Lord demands of us all. Few have so clearly and completely reflected this truth as Witold Pilecki.

Joseph Barnas is a senior year college student at the University of Illinois at Chicago, studying economics and public policy.