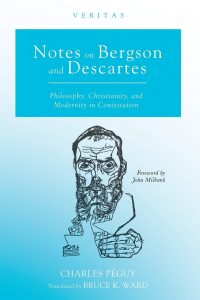 On September 5, 1914, as the First Battle of the Marne was beginning, Lt. Charles Péguy of the French infantry took a bullet to the forehead and breathed his last. The general mobilization had called him into active service only five weeks earlier. This errand had forced Péguy to break off mid-sentence his writing of a remarkable essay, “Conjoined Note on Descartes and the Cartesian Philosophy,” now fully in English for the first time as part of Notes on Bergson and Descartes. These titles portend dry, donnish dispassion and so belie their contents. In fact, these writings encompass some of the most frighteningly keen diagnoses of the modern world ever preserved. It’s as though fate meant to silence their author before the truth became too appallingly clear.

Before turning to those diagnoses, a bit more about the man, whose reputation in the English-speaking world is not so much dim as non-existent. Péguy was born in 1873 in Orléans, France, to a peasant family. It was the kind of authenticity that many a socialist would wish to appropriate, and that many a peasant would wish to escape. Péguy’s father died when he was a baby, and he grew up in toilsome poverty. His mother and grandmother, who earned their bread re-caning chairs sixteen hours at a stretch, could barely read. Nevertheless, he made it to the École Normale Supérieure, where in the course of studying philosophy he was converted to socialism and began to publish essays, poems, plays, and a journal to which he was the primary contributor. His literary reputation swelled. Sometime around 1908, he returned to a kind of Catholicism, which, though non-sacramental, was deeply felt and resulted in many works on Christian themes, to say nothing of the pilgrimages to Chartres. For several years until the First World War, he also audited courses by the philosopher Henri Bergson (1859–1941).

The essays in this volume are almost incomprehensible without some familiarity with the thought of Bergson. He is the activating ingredient that lets the essays under review explode into color. Although many now seem strangely unaware that Bergson was one of the greatest philosophers who ever lived, Péguy glimpsed the significance of Bergson immediately, as did so many of his contemporaries.

Bergson’s whole oeuvre is in some ways a meditation a single beautiful idea: the difference between the world of exclusive objects spread out in space, and the world of the first-person subject that endures creatively through time, utterly unlike the physical objects we touch and see—more akin to music than matter. For practical reasons, the human intellect is equipped to think in terms of exclusive objects and thus finds it nearly impossible to grasp our real inner nature, which must be known through pure intuition. In a series of works published between 1889 and 1907, Bergson launched an exhaustive and lyrical attack on the modern idea that existence could be understood as something inert and mechanical. Existence was, rather, organism—creativity itself.

Péguy thought that Church leadership ought to have appreciated—even if it could not outright bless—such a pretty demolition of Enlightenment lying. Instead, it placed Bergson’s works on its Index of Prohibited Books. Péguy was incensed: “He has against him those who owe him everything.” It was this rage at ingratitude that animated his last essays. How to sum them up? This is perhaps adequate: the modern world is sick because we don’t appreciate the real meaning of time. The remainder of this review attempts a summary of Péguy’s sinuous essays—really, more of an enticement to encounter the originals.

Physics treats time past, time present, and time future as the same because mathematics takes no notice of “tensed time.” The variable t can receive a number but no marker of a living perspective. Rudolf Carnap (1891–1970) noted in his memoirs that this disturbed Einstein, who “explained that the experience of the Now means something special for man, something essentially different from the past and the future but that this difference does not and cannot occur within physics.”

Yet for the human being, past, present, and future could hardly differ more. Think of a man passing a beggar. If this event occurred in the past, the man can no longer change whether he gave the beggar a dollar or not. If he expects this event to happen in the future, he may or may not follow through with his intention to give a dollar. Only in the present can he actually effect his intention. This is the privilege of the present: the opportunity to make a difference. Only when a leaf on a stream flows by me now can I choose whether to pluck it out, or not. “The present is not inert,” wrote Péguy. “It is not merely spectator and witness.” Time, then, is not simply “one damn thing after another”; time is our opportunity to shape the world in accord with our purposes, however feebly. The true meaning of time is the entrée of human value and human freedom into an otherwise indifferent and monotonous world. (A contemporary defense of this idea may be found in Raymond Tallis’s magnum opus Of Time and Lamentation.)

So far, so Bergsonian. Here Péguy takes up the story. If Bergson supplies the metaphysics, Péguy supplies its social application. Péguy had noticed something strange happening to the modern experience of the present tense: more and more the present moment seemed informed by our cares for the future. Accordingly, the present tense seemed rigid, mechanical, less free. But why would this be so? Why would careful planning bind us? Consider how I scheme to provide myself with a good future. I must rely on aspects of the world that repeat, that are stable. Pattern is the lifeblood of prediction: the tides, the seasons, the stars. Nevertheless, the more reliable something is, the less creative it must be. The last thing I want is for my savings account to exhibit creativity. Nor do I want the currency of my country, through some catastrophic “innovation,” to lose its status as legal tender for all debts public and private. It follows that any society dedicated to creating a secure future for the greatest number must build social structures that are increasingly reliable, and thus increasingly rigid.

This is the burning core of Péguy’s criticism of the modern world: we may think of foresight as freeing. Péguy sees it as a cage. When I plan for the future, my present freedom is, so to speak, spoken for, requisitioned. The more foresight I exhibit, the more the future reaches back in time, through my very prudence, to control my present moment: “[O]ne ends up with a present that is a thin slice of the past, at the limit of the past.” Péguy means that the present becomes as immobile as the past, since my cares for the future now inform it entirely; this is, in his arresting phrase, the “mummification of the present.”

In an older society where I am subject to upheavals and vicissitudes, I may be full of dread about the future, but I am never under the illusion that I am totally responsible for my destiny. In modern society, however, every choice at every moment seems to determine where I end up in the world. Provide, provide! The presiding spirit of modern world is Ben Franklin: “the great hero, the great man of our primary school teachers, the greatest man in the world according to them, the only wise and knowing and moral one, and truly the guy.” Whether or not I actually can control my fate is irrelevant; I feel as though I must either take or pass up opportunities to prepare, above all, for a comfortable retirement. “As the Christian prepares for death,” Péguy writes, “the modern prepares for this retirement.… the world is destined to become an immense old people’s home.” We learn prudent habits, but they are, increasingly, all we learn: “the death of a being is its complete saturation by habit.… a dead soul is also a soul habituated to its limit.” In the course of securing my future, I blind myself to time’s true meaning: the incarnation of freedom in a world of necessity.

To modern people, no conclusion could be more absurd. But no conclusion could be more consonant with the New Testament. “The one who economizes, who saves money for his old age, is strictly speaking the one who is prodigal, and a bad prodigal,” Péguy tells us, “For he binds, he alienates his freedom, his fecundity, which are the true goods. He sells them, and what he puts aside is precisely the price of this sale.… This is the most profound teaching of the Gospels, the most everywhere present in the Gospels, and certainly the one that Jesus evidently most honored.” When Christ announced his imminent crucifixion, which he would not “prudently” avoid, his followers were aghast. His response? “Get behind me, Satan! For you are a stumbling block to me.” There is little wonder that the author of these essays, animated by this otherworldly principle, would go to the Marne to receive a bullet. These last writings of Péguy deserve the attention of all who live, or are about to live, in an ever more mechanical society—in short, everybody.

Nicholas Meverel is a writer living in Washington, DC.