An Invaluable Bit of Aquinas 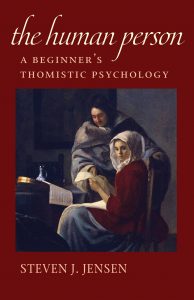 How would our society be different if all Americans had just a little bit of Thomas Aquinas? Many of our age’s most pressing questions would be answered sagely and succinctly—yet sufficiently—if Americans had the same familiarity with the Prima Pars of Aquinas’s Summa Theologiae as they do the lyrics to Journey’s “Don’t Stop Believing” or the storyline of the original Star Wars trilogy. Yet, I’d wager, most Americans would be hard-pressed to identify who Thomas Aquinas is, let alone his most important works or ideas. This is why The Human Person: A Beginner’s Thomistic Psychology, by University of St. Thomas, Houston professor Steven J. Jensen is such an invaluable text. In less than three-hundred pages Jensen effectively and accessibly introduces the most foundational concepts of Thomistic philosophical thought. In keeping with the claim that Aquinas can answer many controversial contemporary debates, this article will answer three such questions, all offered through the prism of popular American films.

Blade Runner 2049, a popular remake of the original 1982 film Blade Runner, takes place in an imagined 2049, where robot bioengineered people called replicants serve as the slaves of humans. The remains of a female replicant who died during a caesarean section is discovered by a replicant police officer, seeming to suggest that the robots are capable of sexually reproducing. Over the course of the film, the viewer is told that these replicants can feel, think, and dream just like humans. Perhaps the most salient questions raised by the sci-fi movie is then “can computers ever acquire all the traits that would make them indistinguishable from mankind?” Aquinas gives a thorough, well-reasoned answer.

We must first understand what he describes as the essential difference between transient and immanent actions. The former are actions defined by an agent (or subject) giving rise to some change in a patient (or object). Examples of this include most things we visibly witness in the material world: a person drawing a picture, fire making a pan hot, or a cat begetting cats. The latter, alternatively, are actions without a patient acted upon but that retain a certain end—the actions begin and end with the agent. Examples of this include thinking, imagining, remembering, and certain parts of the actions of seeing or hearing.

A computer can obviously do plenty of transient actions. For example, it can play chess by following mathematical computations, and then offer outputs. These transient actions can be very complex and very rapid, which can given the impression that a computer might possess the same qualities as a human person. But a computer cannot perform immanent actions. It isn’t aware that it’s playing chess. Nor can an arrangement of transient activities, no matter how many or how diverse, create an immanent activity like memory. As Jensen explains, a collection of transient activities only “directs the activities of the parts.” The “memory” that machines have is more akin to the memory of a notebook, rather than that of a person. The ink on the paper has no “memory” as such, but lies in the mind of the person who wrote it, or those persons who later read it. Likewise a machine only has “memory,” inasmuch as it derives from the person who created the machine, or later persons who understand how it works. Put simply, machines, no matter how complex, will never transcend their material, transitive nature.

Here again, Aquinas’s distinctions are helpful. Let’s first consider reason. It’s true that animals’ behavior can look like reason: beavers create patterns when constructing their dams; other animals appear to recognize similarities and differences. Yet humans are fundamentally distinct—only they are aware of themselves as conscious beings. Thus while an animal might draw a connection between a behavior and a result (like a dog who sits acquires a treat), it does not abstract this “knowledge” into broader principles. It simply recognizes that a certain physical behavior results in a sense-based thing it desires. Moreover, the dog associates behaviors with results, but it doesn’t comprehend the telos, as in why certain behaviors are rewarded and others are not.

Let’s also consider language, another indication of human-like abilities. Though a chimp learning two or three hundred words may look like language, it only conveys information; it doesn’t engage in a mental process of representation. Recognizing that doing the sign for the American Sign Language word for banana will often lead to receiving a banana is not the same thing as understanding that a certain external behavior represents banana. This is even clear when we consider the formation of sentences, which is something animals simply don’t do. Indeed, animals trained to imitate grammar by forming sentences have never increased the length of their combinations of words or phrases, suggesting they only connect words with sense-experience.

Moreover animals never seem to pick up language without human direction. Chimps who hang around scientists all day don’t learn words or phrases like “control,” or “measure” or “have any weekend plans?” They only learn the words or phrases purposefully and dogmatically taught to them: “give” “banana” “me.” Indeed, we have no reason to believe a chimp actually understands, in the abstract, that he is communicating “Give me [a] banana.” As Jensen notes:

Attempts at undermining human uniqueness have also come from philosophical speculation regarding man’s will and fate. In the popular 2007 film No Country for Old Men, archetypal sociopathic killer Anton Chigurh determines the fate of many of his victims with a coin toss. One of his victims, shortly before he kills her, tells him: “You don’t have to do this.” He demands she call a coin toss. She responds, “No, I ain’t gonna call it.… The coin don’t have no say! It’s just you!” He responds, “I got here the same way the coin did.” Chigurh operates out of a twisted sense of fate, believing that the coin toss, not his own actions, are ultimately responsible for persons’ fate. There are many people in the West who believe man’s actions are just as predetermined—perhaps by evolutionary biology—as does Chigurh.

Aquinas’s response begins by arguing that every act of the will arises from an inclination. More precisely, this inclination is towards the good—every willful act by a human person is taken because the will is inherently dispositioned towards the good. Yet the will is directed by that other human power with an immaterial end, namely, the intellect. Thus, although the will is in one sense not free (it isn’t inclined towards the bad, but always the good), it is free in relation to lesser goods, which are determined by the intellect. Jensen explains:

In the interplay between reason and the will, then, reason begins by presenting some good (such as health), which the will then desires. Next, the will moves reason to deliberate, in order to determine whether this good is worth pursuing and by what means. The deliberations of reason ultimately issue some judgment about actions to be performed (such as biking). The will then must accept or reject this judgment. More precisely, the will must either continue with its movement to deliberation or it must cease deliberation and move to the action that reason has presented.

This view is quite sophisticated, because it recognizes that all objects have some good, but don’t fully realize the ultimate good. Thus man, moved by his will, often chooses things that have some marginal good, but actually undermine his greater good. Yet he always retains the ability to direct his will—via his intellect—towards what will promote his own flourishing. Contra the Texan murderer Chigurh, man always has the choice not to make his choices by some coin flip, or some indelible inclination towards certain ends, but by intellection, directing the will towards any number of outcomes that could never be predicted by biology or chemistry.

These reflections have only scratched the surface of Jensen’s text and the logical labors behind the arguments I’ve presented here. For those who require more intense argumentation to accept the claim that robots will never be human, that humans are greater than other animals, or that humans possess free will, they will have to read the relevant chapters in The Human Person and decide for themselves. Yet I hope even these brief, inadequate summaries of St. Thomas and Dr. Jensen will prove to the casual reader that Aquinas is more than some esoteric medieval Catholic theologian, but a brilliant mind whose ideas and arguments on topics of the highest relevance to contemporary society require careful consideration to realize the truth. Indeed, as Aquinas’s own spiritual and intellectual mentor declared, “the truth will make you free.”