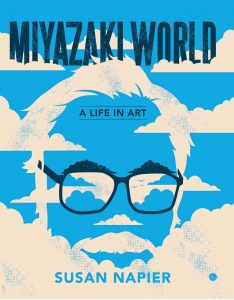 We owe Susan Napier and the Yale University Press a debt of gratitude for her efforts in Miyazakiworld, a book that shows everything academia has to offer when it comes to the popularization and interpretation of poetry—for what animation director Hayao Miyazaki does can only be adequately described as poetry. Napier, the Goldthwaite Professor of Rhetoric and Japanese Studies at Tufts University, who has published books on anime before, now has completed a sort of comprehensive study of Miyazaki, writing a chapter on each of his movies, another pair of chapters on his only anime series and his longest manga, and an introductory chapter on the man himself, with further useful biographical notes annotating his career, which spans more than fifty years at this point.

Miyazaki is the most important animation director since Walt Disney and he seems to have invented or perfected a form of storytelling that has acquired every mark of success, from wealth to popularity to prestige to Oscars to, finally, the interest of intellectuals. Napier seems to take his work so seriously as to have read every significant interview Miyazaki has given, as well as many by his collaborators, and the man’s essays and journalism, too. She is also familiar with his poetic sources and the thriving Miyazaki critical literature in Japan. What’s more, she deploys the fruits of this exhaustive archival work and survey of literature skillfully and without any attempt to show off. At its best, the book shows the curiosity of a scholar who loves Miyazaki’s poetry the best way she can—as a scholar.

Since this comes across as a neutral attitude, not taking sides in disputes about the meaning or influence of Miyazaki’s work, siding everywhere with mainstream interpretations and rejoicing in the fame the man has acquired, it’s particularly useful to introduce people to Miyazaki. If you’ve seen any of his movies and felt the strange attraction they exert, this is the book for you—it will guide you through all the others and reward your attention with more pleasure from watching the movies, all the while reassuring you that anime is a respectable genre.

Of course, academics aren’t angels. There’s a price to pay for all Napier has to offer. You have to put up with a lot of psychologizing of Miyazaki. Clearly, Napier loves his work and wants to defend his reputation against most criticism, but she is constantly trying to reduce his art to biographical notes—traumas, primarily, which allow her to play the game of recognizing elements of his psyche in his work, so that she never has to consider any single movie as a coherent whole, self-standing and with something to offer. Arrogance is the sin of the enlightened academics—they wonder at beautiful poetry, but cannot ultimately believe that a poet may be superior to academics …

This leads us to the weakness of the book. It does very little to explain why Miyazaki has become a revered figure in Japan. Napier makes no attempt to make the case for his greatness, and yet that is the best way to understand him. That would mean to compare him to Akira Kurosawa, the greatest Japanese director—the man who endeavored to rescue Japan from the ignobility of World War II, which isn’t reducible to defeat, by creating new myths, ambiguously historical and philosophical, and some of them incredibly popular and influential, including in America.

Miyazaki, born during World War II, also sees his mission as rescuing Japan from ignobility—but what worries him is something other than the war and the history that led Japan in that direction. Instead, it is the possibility that what we might call culture could be totally annihilated as people get used to a fully artificial, technological society. To speak in the terms we have inherited from our philosophical traditions, the problem Miyazaki is facing is that nature could be completely covered up by conventional wisdom, because now conventional wisdom is not just a matter of myths or prejudices that could be dispelled by science. The conventional wisdom that threatens to desiccate our world includes science and a scientific theory of nature that fully excludes human beings from account, making us strangers in the world.

Napier looks to shinto, the ancient animistic Japanese religion, as the source of Miyazaki’s ideas, as well as the answer to why Japan has fallen in love with his stories. This seems to reveal what’s distinctive about his art, since it announces an opposition to the Western view of things. Napier calls the latter anthropocentric: man is different than and superior to the other beings. Since all the stories have heroic protagonists, however, the same view of man’s special status naturally emerges from Miyazaki’s stories, so this is a complicated problem.

What’s more, since Napier herself loves this art without having any of the faith or habits of the Japanese, she’s in theoretical trouble. The stronger the claim for Japanese distinctiveness, the less is she personally competent to make that claim. The academic form of this contradiction is that Napier acts as a scholar, describing dispassionately another culture, but implying all the time that, actually, she gets it—it’s not “other” after all. Unless there’s a bit of shinto in all of us, however, do we really get Miyazaki’s movies, or are we just deluding ourselves, given his international success? Such are the pitfalls of academic multiculturalism.

Napier says shinto is a kind of nature-worship, and we can also point to the habit of Japanese people of participating in shinto rituals and visiting shrines, all of which suggests remembrance of and maybe reverence for a preindustrial Japan. There is something to this as well and, again, opposition to the West would seem to be what’s sought in shinto. But of course, neither Miyazaki nor Japan are trying to reject modern industrial civilization, so we’re again stuck. As Napier points out, modern technology is not an unmitigated evil in Miyazaki’s stories, so this is not about a reactionary attitude.

From an academic point of view, the way to think about Miyazaki would be to turn to Rousseau, Nietzsche, and Heidegger, the greatest critics of artificiality and technology from our own tradition. Someone up to this challenge could complete Napier’s view of Miyazaki. Rousseau is far and away the most astute critic of modern society, the philosopher who can vindicate the claim of Miyazaki’s movies, that children are in a way innocent of our social ills, that they retain an ability to receive a natural education. Since Rousseau was a great influence on nineteenth-century literature, including many of the children’s stories that Miyazaki grew up loving, there is a far more direct connection between them, bypassing academia altogether.

Nietzsche is the philosopher who claimed that the way out of nihilism is to learn to love the world, to affirm our suspicion that life is essentially tragic and there’s no divine providence or salvation waiting beyond this world. On that basis, Miyazaki’s attempt to show that there’s hope after the apocalypse, something Napier comes back to again and again, could be vindicated, as well as his attempt to show within the fantastic element of animation that the postmodern future means retrieving the premodern past.

Heidegger was the most implacable critic of technology and its effects on our minds. He claimed technology is responsible for our inability to experience nature as what it is, forcing us instead to reduce everything we see to ways of exploiting power or energy. Heidegger also talked about the premodern way of living in communion with nature, that is to say, banishing strife and striving from human experience and accepting mortality instead of trying to conquer nature and death.

These thinkers could account for the three most important elements of Miyazaki’s poetry and, moreover, for his preference for storytelling over arguments or treatises—for poetic over intellectual engagement. First, children in Miyazaki stories are able to see clearly the conflicts that are threatening to tear our humanity apart and have to find some way to work through them. Next, these conflicts themselves reveal a threat to end the world as we know it. Once we adopt the point of view of children, we become able to see this threat and can thus be properly terrified by the enormity of the crisis of modern life. Finally, beyond the catastrophe of the artificial world in which we live, there is a strange kind of grace, which seems to announce some kind of divinity, but is certainly neither Christ nor some prebiblical god. It’s in that world that we can hope the children over whose fates we worry will be able to live free of our divided being, of our tendency to be our own worst enemies.

This also accounts for why so many people from the West love Miyazaki’s movies—they seek relief and release from Enlightenment and the scientific view of things. Miyazaki’s open rejection of the realism of movie-making in favor of fantasy is a guarantee for his audience that they are free of the trouble that otherwise make us so miserable. But his poetry is not escapist, even though it deals with how to escape our crisis. He just thinks poetry is a better way to experience our crisis—within the restraints of art it becomes manageable, or at least bearable.

The preference for child protagonists over adults helps to redefine what makes human beings important. Adults have caused, or at least perpetuate, the crisis of modernity—their self-importance has to be punctured because they always think the solution to he problem must be more of what caused the problem. Children, on the other hand, can discover the true ground of what makes human beings important by trying their hardest to save the adults from the catastrophic consequences of their actions. The children are caught between nature and the artificial world, but could hopefully reconcile that division.

Miyazaki seems to hesitate among the three elements of his thought: the innocence of children, the apocalyptic power of adults, and the possible grace of the world, beyond our power to control or predict. The reason for his hesitation can also be understood if we understand these elements. He cannot choose between adults and children without declaring, implicitly, that mankind is naturally evil or that evil is in fact an accident to be overcome.

If the way of the adults is the truth about human beings, then apocalypse is the necessary and deserved consequence. Man is naturally evil and only extinction could put an end to that evil, given the powers scientific technology has given us. But if the way of children is the truth about human beings, then we can overcome evil, since innocence mysteriously recurs in each new generation.

Miyazaki reproduces in his work not psychological trauma, but our own modern dividedness. It takes great respect for each of his works to discover his insights and think about what modern experiences they deal with. Psychology is indeed the crucial question, how our memory and imagination and other faculties make sense of our experience, but it is not for us to psychologize Miyazaki—it is for us instead to learn from him about what stirs in our own hearts.