At the Suffrage of the State 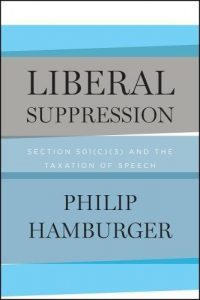 Why read legal history, especially if you are not a lawyer? The field is dominated by specialists and opportunists. Specialists can inform us in important ways about particular areas and eras of law, for example showing the continuing importance of natural law in early American courts. But most specialists refuse to integrate their findings into more general descriptions of legal development, let alone law’s influence on society as a whole; they prefer to deal in specificity and detail. Still, their work can be interesting and highly useful to those seeking to piece together a more complete picture. Not so the work of the much more common opportunists—practitioners of what is rightly derided as “lawyer’s history.” These ideologues “explain” doctrines and documents (e.g. the Bill of Rights, fault, or the Fourteenth Amendment) by weaving together tendentious examples and misleading abstractions to shape narratives supporting their own political programs. Such efforts have garnered attention and heightened status for skilled opportunists, at the cost of politicizing courts and delegitimizing law and lawyers.

In a series of books written over the last fifteen years, Philip Hamburger has trod a different path. Brought up in a lost scholarly tradition (his father, Joseph Hamburger, was an important historian of political thought), he has combined careful consideration of text and context to illuminate specific legal doctrines. He has gone further by showing how these doctrines were influenced by and in turn affected historical trends that have undermined American law and society.

Laymen and lawyers alike can find in Hamburger’s work penetrating critiques of modern-day prejudices supporting judicial supremacy, the administrative state, and the doctrine that religion must be kept out of the public sphere. But Hamburger’s work tells a story that is broader and deeper than any particular doctrine. His explorations of the roots of changes in legal theories and rules bring to light the dimly understood sources of American authoritarian impulses, namely fear of authority, formalized as the “religion of democracy” and its adherents’ assault on our republican institutions.

Liberal Suppression: Section 501(c)(3) and the Taxation of Speech announces in its title Hamburger’s method and conclusion. In this book Hamburger shows how a once-obscure tax provision played an important role in transforming American public discourse and legal, political, and social practice. In formal terms, 501(c)(3) has roots in a 1919 provision exempting “non-profit” corporations from certain federal taxes. The provision was built on and strengthened in its restrictive power through severe limits on lobbying in 1934 and a ban on campaign activity imposed by then-Senator Lyndon Johnson in 1954. In broader terms, 501(c)(3) is the product and tool of liberal theology and liberal politics, both of which have a widely ignored and increasingly powerful dark, authoritarian side.

Central to Hamburger’s argument is the fact that 501(c)(3) is unconstitutional. From before the Founding into the twentieth century, common law recognized that churches and other voluntary associations are not commercial, profit-making enterprises. Fraud existed and was to be punished, but non-profits’ essential character as associations meant that their incomes, like their property and activities in general, are not appropriate objects for taxation. Yet today non-profits must refrain from engaging in expressive activities central to their purposes or suffer crushing financial penalties, especially income taxes and the loss of donors’ ability to receive tax deductions for their donations. In effect, 501(c)(3) forces associations to give up their rights to speech, petition, and religious liberty in exchange for being left alone. On these terms, 501(c)(3) is a government protection racket aimed at suppressing expressive activities challenging liberal orthodoxy.

How did we come to the point where we accept government licensing (and bullying) of idealistic associations as if it were normal? Building on the argument he presented in Separation of Church and State, Hamburger marshals a wealth of direct textual evidence to show how cultural breakdown (he terms it “individuation”) and fear of authority combined to change the very structure of American society and public opinion. Within this new structure voluntary associations exist only on the sufferance of the state and must conform to the tenets of the national, democratic faith if they wish to be tolerated.

The prime mover of both individuation and fear of authority in America is liberal ideology. Taken to an extreme and out of its traditional context, liberalism becomes a faith in the power and goodness of the individual. That individual is seen as capable of great things, but in constant danger from authoritarian institutions. Already at the time of the Founding, various individualist, liberal sects had grown up in which each person was to follow his own conscience alone. But these religions coexisted with more deeply rooted faiths and traditions that cabined their atomizing tendencies.

Over the course of the nineteenth and early twentieth centuries, liberal theology helped erode these faiths and traditions, undermining natural associations and republican institutions. The original, state-appointed membership of the Senate is an obvious example of institutions designed to protect localized culture and decision-making that fell under the axe of democratic ideology. But long before this constitutional revolution liberal ideology targeted local communities and voluntary associations—and especially the “authoritarian” Catholic Church—for suppression.

The massive influx of Irish Catholics during the early nineteenth century elicited fear and loathing among liberal religionists, along with those few secularists engaged in public discourse at the time. They responded, first, by stifling Catholics’ attempts to gain public support for their own religious schools, which sought to compete with the overtly Protestant public schools. More broadly, liberals began constructing a set of centralizing institutions aimed at forcing assimilation to a narrow, warped reading of the American way. Early attempts to silence Catholic voices emphasized the danger posed by persons owing allegiance to a “foreign prince” (the Pope). This prejudice quickly expanded to encompass any authority residing in a partial grouping, be it church or other voluntary association. Such associations, on this view, pose a threat to individual conscience, disloyalty to the national ethos, and subversion of public morals, taken as commitment to an increasingly individualistic way of life. All this was couched in terms of a defense of American democracy.

“Democracy” thereby became a political and philosophic code word for the sort of society that so many liberals sought—a society in which individuals stood alone in relation to government. Although this individuality may initially sound liberating, it came (as Tocqueville understood) with an enervating equality—to be precise, an equal weakness in relation to government. Americans traditionally overcame this equal weakness through their voluntary associations, but this became increasingly difficult when the speech of such bodies was condemned as the “propaganda” and “influence” of antidemocratic and thus “subversive” organizations.

Individualism of the selfish sort Tocqueville feared came to dominate as liberalism grew from a minority position within a society made up of natural, local associations into a dominant orthodoxy. Thus, America’s variegated republican polity eventually collapsed into a hollow, democratic regime; a regime that relied on a “religion of democracy” to bind its citizens to the state and justify marginalizing opposition voices.

Unfortunately, in accordance with the limited scope of this book, Hamburger’s history is not complete. He does not discuss in any detail the role of the “laissez faire” court in suppressing local associations in the name of science and national markets. He also glosses over the shifts in liberal leadership during the late nineteenth and early twentieth centuries. During this time the heights of public opinion and power were seized by progressive liberals (for example Woodrow Wilson and John Dewey) who looked to the administrative state as both the guardian and the tool of democracy. But these elites shared with more populist forces—including even leaders of the then-not-marginalized Ku Klux Klan—a determination to forge a society of individuals. In practice this meant enforcing a common, unquestioning faith in the goods of equality and majority rule, forcing individual persons to face the state and the national culture without the burden (or benefit) of natural associations rooted in faith, locality, and salient common characteristics.

Decades before Harvard philosopher John Rawls pronounced his ideal of an “overlapping consensus” dictating the kinds of reasons suitable for promoting public policies, liberals already asserted that policy arguments must eschew controversial assumptions or goals. Rawls merely reformulated, for an increasingly secularized and individuated audience, what had become democratic dogma by the 1930s: that comprehensive visions of the good, especially if rooted in religion, are in bad taste and smack of attempts to coerce supposedly more rational members of society. Science and common sense were reformulated to exclude concern with spiritual and even communitarian impulses, and 501(c)(3) was harnessed as a means to enforce this vision.

Increasingly, then, expressions of religious opinions, concerns, and goals—along with expressions of most other visions of the common good—were forced out of the public square. As liberalism became more powerful, its adherents laid aside pursuit of mere balance in the public square, instead seeking dominance and elimination of the authority of religion and orthodoxy. Neutered by 501(c)(3), churches and other nonprofits are treated in law as mere associations of individuals, interested solely in expressing and following their own consciences. Religious reasons in particular are minimized, derided, and marginalized in favor of secular values (always of the left-wing variety) and adherence to orthodoxy is treated as a weakness, if not a disease.

Today’s law and dominant social forces deny that, as Hamburger puts it, “when organizations are oppressed, so are individuals.” Today’s liberal individualism is incapable of recognizing that people by nature form and live much of their lives within associations and that, as a result, the suppression or destruction of such associations impoverishes and even oppresses the persons who constitute them. Indeed, such actions prevent people from becoming fully human.

Above all, liberal suppression empowers the central state at the expense of real, living persons. The resulting society can be far more authoritarian than one made up of overlapping, sometimes authoritarian associations because it demands national conformity of belief regarding who we are and what we should value. Above all, liberal individualist society lacks checks on power. As Hamburger notes, “idealistic organizations may be essential if government is not to control the public opinion by which government should be controlled.” Caesarism ever is presented as the will of the mases; it may be so again, or already.