Baseball, Out of Time? 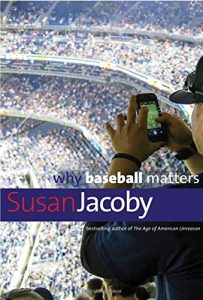 Baseball remains one of the most profitable sports franchises in the country, trailing just behind football and basketball. In Why Baseball Matters, however, the latest volume in Yale University Press’s “Why (x) Matters” series, Susan Jacoby argues the game is losing clout amid demographic and technological shifts. Jacoby sometimes gets bogged down in detail, but Why Baseball Matters ultimately succeeds both as an interesting cultural history of baseball and defense of the sport in a time of great change.

As its title suggests, the book is essentially a defense of America’s favorite pastime in a changing cultural climate. Jacoby begins by praising the game’s “clockless suspension of time” that makes it exist seemingly apart from the humdrum of ordinary life. Subsequently, she discusses the various challenges baseball faces in the twenty-first century, among them the drift of various demographic groups away from the sport and an increasingly technology-saturated culture that detracts from a true appreciation of the game. She concludes her book by recounting an anecdote about meeting a group of baseball fans in France that filled her with a swelling sense of patriotism, which grounds her argument that it is incumbent upon Americans to pass on an appreciation of baseball rightly understood to successive generations.

The book is most interesting when it discusses how baseball has historically overlapped with trends in American life. Jacoby writes of how Dodgers batter Jackie Robinson challenged racial mores in Jim Crow-era America as the team’s star athlete, and how baseball experienced something of a cultural renaissance in the 1980s as baby boomers who grew up with baseball in the 1950s began to settle down and start families. In sketching such vignettes, Jacoby writes in an engaging way that captures baseball as both a distinctly American form of escapism and a reflection of the country’s ever-changing national character.

One criticism is that Jacoby sometimes goes on baseball digressions that are not particularly interesting for the casual reader. For example, the book features an extended discussion of sports executives’ desire to shorten the standard major-league game by fifteen minutes to appeal to younger fans. The thesis, and by extension her reader’s interest, can become so weighted with such details as to be momentarily lost to sight.

Ultimately, however, Why Baseball Matters makes for a short and interesting read both as a cultural history of baseball and an apologia for an American tradition. Rambles aside, Jacoby largely demonstrates self-discipline and a consistently engaging style. The book should appeal both to baseball fans looking to engage more deeply with the sport and those with an academic interest in American culture more broadly.

Caden McCann is a current Wilbur Fellow at the Russell Kirk Center for Cultural Renewal. He recently finished a masters degree in political science at the University of Windsor in Windsor, Canada.