Bradbury in the Afternoon 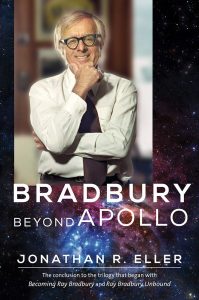 Anyone who considers the life and career of Ray Bradbury (1920–2012) is eventually struck by a remarkable fact: although the renowned author spent well over “seventy years at play in the fields of the Lord” (as he called his long day in the sun as a writer), almost all of his best-known works were written early in his career. The Martian Chronicles, The Illustrated Man, The October Country, Dandelion Wine, Fahrenheit 451, the screenplay for John Huston’s film adaptation of Herman Melville’s novel Moby-Dick, and Something Wicked This Way Comes were all history by 1962, when the last-named novel was published.

By that time Bradbury was a legend: he was hailed and feted by his writing peers and admiring readers of all ages, his name mentioned in the same breath with H. G. Wells and Jules Verne as a writer of astonishingly imaginative science fiction and fantasy. Within the world of literature he knew everybody that was anybody, and his works were well on their way to becoming staples of middle-school and high-school literature courses. So what did the man do for the remaining fifty years of his life? The answer is hinted at in the title of the third and final volume of Jonathan Eller’s masterful Bradbury biography, by the words “Beyond Apollo.”

Why those words? Their significance lies in that from Bradbury’s perspective, the Apollo moon landings—particularly the initial landing in July, 1969—marked the apex of much that the author had dreamed of, the first step in mankind’s outward journey to Mars and beyond. When Neil Armstrong and Edwin (“Buzz”) Aldrin first set foot on the moon at Tranquility Base, it marked the pinnacle of the U.S. space program’s endeavors at that time. Everything that followed—the subsequent handful of successful moon landings, the space-shuttle initiative, the probes to Mars and beyond, the international space station—were wonderful but somehow a step down. As with Bradbury’s career, there was a sense that there was nothing left to prove. Beyond Apollo, there was a transitional phase of reset and refocus in America’s approach to space exploration and in Bradbury’s career.

Which is not to say that the final decades of Bradbury’s life and career were in any way a failure or a letdown. But while Bradbury’s post–1962 career was full of sunlight and success, it was also a time of “almosts,” which are described by Mr. Eller in detail that is fascinating to the Bradbury enthusiast and to the interested newcomer as well. Yes, it was a time for doing a home-run trot around the bases and acknowledging the legions of fans who remained lifelong admirers of the early works, but it was also a time when he continued pursue his lifelong interest in the stage and screenwriting, and to write novels and short stories that were almost in the same league with his more famous work. His novels The Toynbee Convector and Death Is a Lonely Business are almost as memorable as his early novels. The short stories collected in Quicker than the Eye, Driving Blind, and The Cat’s Pajamas are stirring and almost of the same caliber as the stories in The Illustrated Man and The Golden Apples of the Sun. During that time, he almost worked with acclaimed film director Sam Peckinpah on a screen version of Something Wicked This Way Comes.

One “almost” is typical; and it took “the form of a feature-length television adaptation of ‘The Screaming Woman,’ originally a 1951 story of a little girl who cannot get anyone to believe that she can hear the cries of a woman buried alive in a vacant lot.” Mr. Eller continues,

This project grew out of a Universal Television deal for three Bradbury stories, initially targeted for Rod Serling’s new Night Gallery series. That was Bradbury’s expectation, at least, but the deal only led to “The Screaming Woman,” which expanded into a 72-minute made-for-TV movie production that aired instead as an ABC Movie of the Week on January 29, 1972. The expanded format and budget allowed for a John Williams score and a distinguished cast of film greats and TV veterans, including two-time Oscar winner Olivia De Havilland, Joseph Cotton, Walter Pidgeon, and Ed Nelson. Bradbury initially worked on the project, but the expansion of the story into a full-length film plot was crafted by scriptwriter Merwin Gerard. The film received critical praise, but very few elements of Bradbury’s edgy tale remained.

Almost is the story of many talented writers who seek to transition their work from page to stage or from page to screen. He did grasp that dream early in his career, notably through his wrestling of Melville’s sprawling novel into the screenplay for a successful two-hour film version of Moby-Dick; but his myriad successes beyond Apollo would never again be achieved with the same sense of Creation-morning newness that had been his during the ’40s and ’50s.

With this said, Bradbury remained the genuine article: a vastly talented, hard-working writer who published numerous memorable works and became a larger-than-life figure, even as he progressed through the autumn years of his life. His work is pervaded by joy: the joy of life, of having been given the great gift of living in a world filled with wonder, with uplift, and with terror, all hinting tantalizingly at a world beyond, a world of the spirit. One key work that arose from those years, The Halloween Tree (1973), has become a minor classic in the literature of Halloween, combining Bradbury’s characteristic sense of fearful childlike wonder with a darkly imaginative look into the possibility of dire spiritual realities of Halloween that is head and shoulders above most modern literary and film treatments of that holiday.

In the previous volumes of his Bradbury trilogy, Becoming Ray Bradbury (2011) and Ray Bradbury Unbound (2014), Mr. Eller laid the groundwork of his subject’s life in a detailed and compelling manner, describing the background and development of Bradbury’s life and career in an approachable, sensitive manner that is informed and sympathetic but not worshipful. The biographer hits all the right notes with the proper accents and dynamics, noting perceptively that throughout his career Bradbury’s fiction was shaped by the filter of his experiences as a boy in Waukegan, Illinois and as a young man in Los Angeles. The dark, mysterious ravine in Waukegan (where lurked a local serial killer), the ghastly cave of mummies in Guanajuato, Mexico, and Bradbury’s up-and-down experiences with director John Huston while working in Ireland on the screenplay for Moby Dick stuck with Bradbury throughout his life and recurred in his written works. His 1992 novel Green Shadows, White Whale provides fascinating insight, faintly masked, into the genial cruelty that was part of Huston’s personality, which was also captured in Bradbury’s classic short story “Banshee.”

Throughout his career, Bradbury demonstrated a mastery of writing stories of the supernatural and suspense, though he found himself pigeon-holed as a science fiction writer. He bristled at that designation, preferring to be considered a writer of fantasy and high imagination. But truth be told, he dreamed throughout his life of mankind traveling through space to other worlds, there to survive, to thrive, and somehow to overcome Adam’s curse of Original Sin. In his Space Trilogy—the novels Out of the Silent Planet, Perelandra, and That Hideous Strength—C. S. Lewis viewed with horror the prospect of humanity journeying to other planets, believing that we would simply carry the stain of sin with us to those worlds and spoil them while bringing misery to any new life forms that were encountered. Bradbury himself knew well of the taint of poison in the human gene pool but remained unconvinced that its existence should hamper the exploration and settlement of other planets. Somehow we must press on, he believed, to pursue that dream. But beyond Apollo, the dream was deferred.

Mr. Eller’s eloquent conclusion forms a fitting summary of Bradbury’s life. He writes: “The 1960s and 1970s permanently wedded Bradbury to the Great Tale of space exploration and changed the trajectory of his role in American culture. If there was a diminished output of great short fiction across the final decades, it was not just a function of Hollywood and stage productions bleeding off his best writing efforts; it was also the result of a fundamental shift in his felt purpose in life. His true trajectory in the final four decades of his life would be that of a visionary, asked over and over again to tell us why we desire to explore, why we should go to the stars, and what we might become when we get there.”

Biographies of authors can sometimes be dull, as writers tend to spend much time at their desks working. But as evidenced in Mr. Eller’s biography, Bradbury is among a handful of American writers of genius who lived interesting lives and crafted works that continue to appeal to the moral imagination of readers the world over. This final volume, published in the centennial year of its subject, is a fitting tribute to an admirable American original.

James E. Person Jr. is a Senior Fellow at the Kirk Center who has written extensively on Russell Kirk and Ray Bradbury.