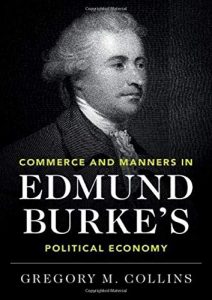 Only someone like Edmund Burke could find in the “motions of England’s internal grain trade” anything resembling “poetry.” But find it he did, according to Gregory M. Collins. In his new book, Commerce and Manners in Edmund Burke’s Political Economy, Collins shows that Burke’s economic thought was attuned to the ways that a market economy could reflect the “rhythmic pulse” of economic life, capturing an element of human communal existence that planned economic policies never can.

Collins carefully examines the entirety of Burke’s economic writings, ranging from the well-known (Reflections, Thoughts and Details on Scarcity, Speech on Economical Reform, and the two American speeches), to the neglected and even obscure (Observations on a Late State of the Nation and Speech on Butcher’s Meat Bill). The result is the most thorough and nuanced assessment available on Burke’s political economy, sure to be an essential resource to all those who study and write on Burke.

The book’s subject is also timely. At a time when conservatives are rethinking their approach to economics and trade, it cannot hurt to go back to the so-called “first conservative” for insight. Of course, the reader will not find answers to questions about Chinese trade or an American industrial policy in Collins’s book. But that reader may be reminded of why conservatives were attracted to markets in the first place, and come away with a fresh perspective on their promise and limits.

Perhaps the most well-known aspect of Burke’s political economy is his unflinching support of the landed aristocracy, featured heavily in his most widely read work, Reflections. But Collins shows that Burke was as committed to the rights of mobile property and the freedom to exchange and dispose of that property as he was to the country’s “great oaks.” Indeed, taken out of context, Burke’s language might sound like that of a good, Reagan-era conservative: “The moment that Government appears … all the principles of the market will be subverted.”

This side of Burke’s political economy certainly does not spring from anything resembling “market fundamentalism,” a term that some on the right today seem to think underlies conservative preferences for capitalism. (After all, this is the same man who warned that Revolutionary France was putting its country’s fate in the hands of “money-jobbers, speculators, and adventurers, composing an ignoble oligarchy.”) Rather, it comes from a deep sense of political and intellectual humility. Burke placed great emphasis on the limits of human knowledge—on our inability to precisely define or fully understand the complex social phenomena that comprise our communal existence. This was true of his economic thought as well.

Any reader of Burke should know of his aversion to egalitarian levelling: The Revolutionaries’ “goal of establishing social and economic equality,” Collins describes, “was a futile quest to create a perfect society in an imperfect world.” But less radical attempts to impose determinate economic outcomes through governmental policy partook of a similar spirit. For example, in attempting to establish set, fair wages or prices, economic policies overlooked the extent to which the complex fabric of economic life is not susceptible to simple answers.

A market economy can do what the detached statesman often cannot—distill various needs, preferences, and interests in a way that is most mutually beneficial. Outcomes based on the interaction between real human beings with real needs in real, distinct circumstances can capture the “fluid and intuitive agreements, practices, and understandings between flesh-and-blood human beings” that “cold bureaucratic rules” cannot. As Collins describes it when discussing Thoughts and Details,

A free market in grain permitted Englishmen and women to make economic decisions based on their private desires unique to their particular circumstances. The competitive price system reflected the infinite fluctuations of production and consumption. And the preservation of supply and demand laws enabled farmers and laborers to make contingent employment arrangements based on their shifting preferences.… Such fluid activity in the market exemplified the many dimensions of social life that could not be measured by a ruler.

Collins further connects such a view of markets to Burke’s broader political thought by pointing to the famous line in Reflections: “The nature of man is intricate; the objects of society are of the greatest possible complexity; and therefore no simple disposition or direction of power can be suitable either to man’s nature, or of the quality of his affairs.”

This appreciation of markets is remarkably parallel to Burke’s appreciation of accumulated tradition and experience in politics—both display a preference for the aggregate results of collective human endeavors over the abstractions of philosophy or policy. And, as Collins stresses on several occasions, Burke believed any economic policy ought to be firmly grounded on carefully observed empirical reality, so as not to disrupt or undermine the natural economic forces already at work.

The same market principles animated Burke’s views on imperial trade, where he continued to stress the possibility of mutually beneficial economic arrangements. In both the American and Indian contexts, Burke promoted the economic liberties of the colonial subjects, arguing that the metropole would ultimately benefit more from the interchange with productive, vibrant colonies than it would from the taxation and exploitation of stagnant ones.

There is also a reflection of the doux commerce thesis to be found in his ideas—though it is somewhat unclear as to whether Burke would see this principle extending beyond imperial borders to promote peace among peoples pulled apart by geopolitical factors.

But politics does not exist simply to promote economic life. The right to property and freedom to exchange were not pre-political rights that override all other considerations. Rather, they furthered a principal goal of political society: an equitable manner in which goods can be made to serve the whole community. In Reflections, Burke inverted conventional natural rights doctrine by declaring that “if civil society be made for the advantage of man, all the advantages for which it is made become his right.” But he certainly did not have modern “entitlements” in mind. Rather, he continued, “[Men] have a right to the fruits of their industry; and to the means of making their industry fruitful.” The working of the market provided these opportunities better than any scheme of distribution that could be drawn up by men.

Because he fit economic exchange within a broader political horizon, Burke was open to exceptions. For instance, though he was highly attuned to their risks, as evidenced by his years-long fight to impeach Warren Hastings, he approved of the establishment of trading monopolies like the East India Company when they “inspired men to pursue ‘great risks in useful undertakings.’” Likewise, he supported the trade restrictions of the Navigation Acts, since they had operated on the American colonies from their “infancy” and the colonists, by and large, accepted them.

But even more important than such political constraints were the ethical constraints of the titular “manners.” Ethical constraints embedded in cultural traditions—not markets—civilized and tamed men. They “prevented the healthy pursuit of profit from mutating into an uninhibited avarice, one that otherwise would have transformed all sacred social relationships into perilous mediums of instrumental exchange.” The manners taught by the “spirit of the gentleman and the spirit of religion” allowed for fair and equitable dealing, thus allowing the market to achieve its broader societal purpose. Even more importantly, these manners kept men connected to the higher, moral human goods that cannot be quantified or exchanged.

There are obviously tensions to be dealt with in this synthesis of what we would consider to be modern economics and premodern social thought. Collins acknowledges as much by framing his book around “Das Edmund Burke Problem”—reflecting the “Das Adam Smith Problem”: are Burke’s market-friendly economics in tension with his tradition-focused political theory? Collins thoroughly and persuasively dismisses one element of this tension, namely, the charge that his economics are an example of Burke embracing the very type of abstract theory he denounced across the Channel. By showing that Burke saw markets as capturing empirical human realities, he fits the economic aspect of Burke’s thought very neatly into the political.

Another tension may still be somewhat ambiguous: Does Burke overlook the extent to which market economies promote avarice and undermine the very manners that made them possible? He seems to have recognized that the commercial society has such dangerous tendencies:

Too many of the financiers by profession are apt to see nothing in revenue, but banks, and circulations, and annuities on lives, and tontines, and perpetual rents, and all the small wares of the shop. In a settled order of the state, these things are not to be slighted, nor is the skill in them to be held of trivial estimation. They are good, but then only good when they assume the effects of that settled order, and are built upon it.

How does our understanding of market economies change in an age when the ethical foundation that framed economic intercourse and elevated our minds to higher things—the “settled order”—has largely been destroyed? Moreover, does the fact that so much of our economic life today consists not in meeting the necessaries of life that Burke was focused on—grain, corn, fisheries, textiles, and the like—but on satisfying passing whims (or even creating new whims in the souls of consumers) serve to make markets a more destructive moral force than they were in Burke’s time?

Ever the pragmatic statesman, Burke had his eyes on his own time, not ours. So he cannot answer these questions for us. But he can, at the very least, caution us to not abandon the principle of market exchange rashly lest, in our quest for a more perfect policy, we overlook the limitations of human understanding, the “intricate” nature of man, or the “complex” ends of human community.

John G. Grove is associate editor at Law & Liberty and the author of John C. Calhoun’s Theory of Republicanism.