Can Whimsy Save the Small-Town Novel? 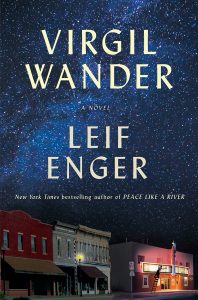 Small towns in American fiction have a history as varied as the landscapes they inhabit. Often stifling or enervating, as in the work of Nathaniel Hawthorne, Sherwood Anderson, or Willa Cather, on rare occasions they have been figured as sites of profound beauty, as in the work of Sarah Orne Jewett, Ray Bradbury, or Wendell Berry. The tension in writers between seeing the village as deadening on one hand and a warm and comforting place on the other can even play out in the work of one writer—consider how Marilynne Robinson moves from a desperate vision of rural Idaho in Housekeeping to her much warmer depiction of Gilead, Iowa in her later novels.

The American small town faces no shortage of complexity in political and social contexts as well. Most have been in decline for a century, victims of global urbanization and an American economy that sees the land as a resource to be exploited rather than a home place. Though an unchecked pandemic and urban unrest may have some privileged urbanites casting their gaze to the countryside, a public health crisis and recession hardly provide the context for a revival of these already resource-poor areas. The future of the small town as a distinct cultural identity in this country may thus be short. Small towns with a life of their own are already so rare as to make Robinson’s Gilead or Berry’s Port William appear almost as nostalgic fantasies. In the future, the small town as a setting for fiction may seem as exotic as stories of life aboard a whaling ship—a romantic narrative of a vanished lifestyle.

Writers taking up the small town today thus face the challenge of telling a story about a subject that much of their audience may find irrelevant at best. Stories of village life all too easily fall into sentimental kitsch on the one hand or overwrought pontification about rural sociology on the other. What stories can be told about small towns now that will evade these pitfalls? What writerly strategies can make the small town setting vital in our urbanizing world?

In Virgil Wander, his first novel in ten years, Leif Enger pursues whimsy as the virtue that might revive, if not small towns themselves, at least fiction about them. Enger is a warm and satisfying writer, whose work bears the influence of popular American stories by Harper Lee, Charles Portis, and the Coen brothers. I have read his debut novel, Peace Like a River, with a graduate seminar and given it to family members—it has met with universal affection. Whereas Peace Like a River and his second novel, So Brave, Young, and Handsome are road novels and quasi-Westerns, in Virgil Wander Enger seldom strays outside the bounds of a single small town, the fictional Greenstone, Minnesota, on the border of Lake Superior.

Greenstone is a failed mining community: “one tattered city of two dozen short streets, a new water tower already rusting at the seams, a few spires, an exhausted block of brick façades, and of course our mightiest edifice, the shuttered monolith of a taconite plant.” Despite its lakeside status, the town has few tourist prospects—the Department of Natural Resources so far has declined to install a breakwater, necessary to attract the lake vacation crowd. Like many a small town in this country, it was founded on a single boom in natural resource extraction, and with the end of that enterprise has come, not the end of the town, but its steady withering. Its community life extends to little beyond fishing, gossip, and scrounging for enough work to make ends meet. The town’s notable public figures include a former minor-league baseball player who disappeared in a private plane over the lake, and the dissolute filmmaker son, aptly named Adam Leer, of the town’s industrialist founder. Nobody is especially remarkable or successful. Greenstone is “full of people who could make you sad just by strolling into view.” Few aspire to much beyond taking a vacation to Florida or catching a record-setting fish.

Greenstone is in trouble, not just because of its typical Rust Belt struggles but due to a series of unsettling, violent events. The unexplained disappearance of the baseball player, Alec Sandstrom, who left behind a wife and child, looms over the novel. The local handyman, on the verge of retirement, drowns when a giant sturgeon pulls him into the lake. And Virgil Wander, the title character and narrator, sustains a traumatic brain injury when he drives his “heartbroken Pontiac” off a bridge and into the lake.

Despite these calamities, Greenstone’s city officials persevere in their attempts to revive the town, with a new festival the latest hopeful project. Attempts to secure Bob Dylan to play the grandstand fail—Virgil manages to reach his agent, who reveals that Bob remembers Greenstone from his Minnesota boyhood, but not fondly. While driving through town in 1964, he got two flat tires; during their repair, the local café served him a meat pasty studded with glass. Virgil comments, “Apparently he wrote a song about it. I don’t know which one.” Next, Leer, whose single film is obliquely suggested to have been pornographic, is invited, then disinvited to speak. Finally, the town settles on an ironic theme of Hard Luck Days and lines up a sad marching band and revelers in zombie costumes for the parade. Greenstone has no prospect of salvation in the Hard Luck Festival, but at least the community will have some fun and maybe a few new tourists will show up.

Amidst what passes for Greenstone’s public life, Enger’s central characters confront their own heartbreaks and longings. Virgil is a solitary man, not native to the area, who drifted into Greenstone after losing his missionary parents in a train derailment and subsequently washing out of divinity school. He loves Nadine, Sandstrom’s widow, but can’t work up the nerve to speak to her, though he once found himself holding her hand in the post office, an experience about which they have never spoken. Enger implies that his plunge into the lake may not have been entirely an accident. Meanwhile, Nadine is raising her son Bjorn alone, troubled by other men less reserved than Virgil. She must also cope with the surprising appearance of Rune, a pensive Norwegian and the long-lost father of her missing husband, who has come to Greenstone seeking to learn as much as he can about the son he never met. All three need each other in ways they can’t articulate, and struggle with griefs that never come fully to the surface.

Despite the pangs of unrequited love or the loss of family members, Enger’s central characters are devotees of whimsy. Virgil operates the town’s movie theater to little profit, showing classic films which he introduces each night with a speech to an audience ranging from fourteen to twenty-seven. Nadine makes her living on custom neon signs built out of her basement—winged books for bookstores and smiling piglets for barbecue restaurants. And Rune spends his days flying a playful assortment of custom-built kites, in the shape of a dog, a bike, or an anvil. These playful, impractical pursuits help the three cope with the various hardships their life in Greenstone has brought upon them.

Greenstone’s own revival, however, does not come from whimsy, nor from the Hard Luck festival, but rather from its shocking and violent disruption. Greenstone is ultimately revived not by Virgil and his quirky friends, but by an estranged and desperate married couple, the ambitious Ann and the down-on-his luck Jerry Fandeen. The explosive end to their marriage also takes down the festival and the last remnants of Greenstone’s mining heritage, transforming Greenstone in a single day.

The aftermath of an event that brings Homeland Security and the FBI racing to Greenstone’s outskirts is a town restored, if not to prosperity, at least to hope. Adam Leer and his father’s derelict mine both vanish. The Department of Natural Resources builds that breakwater after all. Dylan deigns to return for the next year’s Hard Luck Days. Virgil and Nadine, married, may be on their way out of Greenstone, taking their whimsical pursuits with them; yet their departure is accompanied not by despair at Greenstone’s fate or loathing of it, but with joy that the town no longer needs them quite so desperately. “Our future is airborn,” Virgil lyricizes as the novel concludes, “when the sun rises we’ll know what to do.”

Whimsy will not be the salvation of small-town America. The pleasure of a kite in the sky, a fish on the hook, or a hand-built neon sign cannot revive whole communities. But these small, playful, everyday occupations can be what preserves small-town literature from the twin pitfalls of nostalgia and despair, each of which carries its own tendentious stereotypes about the American village. Enger’s characters are their own individual selves shaped by their own small delights, never comic country bumpkins or fatuous portraits of Rural America Today. Accordingly, Virgil Wander is a satisfying and durable comic novel, not too beholden to the news cycle, but timely in its consideration of Midwestern life nonetheless.

And for those of us who persevere in small-town life, whimsy as modeled by Enger’s protagonists can be an invaluable source of comfort. Something noble adheres to the obscure and seemingly purposeless hobbies one can run across in small towns—hunting mushrooms, carving stumps, local history. When one’s place can’t pretend to national significance or cultural dynamism, whimsical pursuits can nonetheless get one through the days. Even more than tools for coping with hardship, small acts of whimsy can lend joy and pleasure to even the biggest moments of life. And so it is for Virgil. From lonely despair as a part-time film projectionist to renewed happiness as Nadine’s husband, Virgil attains his personal hope in and through whimsy. It is no accident that on the evening when he and Nadine first kiss, it is under the light of neon. Outside the house, Rune’s kite flutters against the stars.

Matt Miller lives and writes near rural Reeds Spring, Missouri, where he is working with his family to reforest their retrosuburban lawn with regenerative food crops. Less interestingly, he is Assistant Professor of English at College of the Ozarks. Reach him via matt-miller.org.