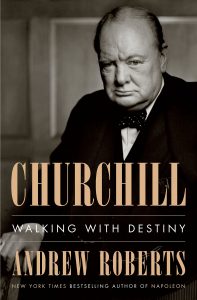 There are now more than a thousand biographies of Winston Churchill. Or so declares the publicity material accompanying Andrew Roberts’s new biography of Winston Churchill, which reflects a somewhat peculiar notion of how to publicize a book. One amid many, many similar things! hardly seems a selling point—unless, of course, the new one is as special as Churchill himself was. “We are all worms,” he once told his friend Violet Bonham Carter, “but I do believe that I am a glowworm.”

And maybe Andrew Roberts’s new book is that special. There’s certainly something well matched in the contrast between Roberts’s fast-reading prose and the ornate periods in which Churchill spoke. More to the point, Churchill: Walking with Destiny is as balanced as a single-volume biography can be: condemning of the man’s failures, praising of his successes, and wise enough to know the difference.

That kind of wisdom is much needed these days, given that we live at a moment in which, for example, the astronaut Scott Kelly could quote one of Churchill’s feel-good aspirational lines in a tweet—and then feel compelled to apologize when the Twitter commentariat informed him that Churchill was a racist, sexist, classist, and nationalistic troglodyte. A Nazi, in essence, which is a strange fate for the reputation of the man who saved Britain from the Nazis. But then, Churchill’s reputation has always been a shuttlecock, battered from side to side.

The truth is that Winston Churchill was wrong about a lot. About Gallipoli, about leaving the Conservative Party, about Europe’s “soft underbelly,” about the Soviets not being a threat for decades after the conclusion of the Second World War, about holding on to the British Empire, about the abdication of King Edward VIII, and about calling off the invasion of Southern France. He paid the price for many of those wrongs, while living long enough to see some of them later viewed as right.

Or, at least, some of his errors came to be viewed as springing from characteristics that were needed on other occasions, his vices proving his virtues. “During the Gallipoli campaign,” Roberts notes, Churchill’s “bulldog obstinacy” left him “appallingly vulnerable.” But “in the Second World War, [it] proved invaluable.” Indeed, Roberts writes, the public trusted him in 1940 “not because they believed he had always, or even generally, been right.” They trusted him “because they knew he had fought bravely for what he believed in, while many other, more self-serving politicians had not.” Perhaps that is why his political errors never seemed to end his career the way they would have for other politicians. He knew something that others seemed willing to ignore—that war with Hitler was coming and that Britain must fight it. And through the 1930s he kept his eye on that one big truth.

Along the way, however, he would be many things: soldier, aristocrat, journalist, author, historian, artist, traveler, cabinet member. His varied adventures proved both how animated he was and how desirous he was to achieve fame and fortune. But it is worth noticing—as Roberts’s biography makes clear—that at every stage, he deliberately set himself to grow as a writer and speaker. From very early, he realized that he would achieve none of his desires if he could not persuade and inspire.

At the rhetorical techniques of persuading and inspiring, he proved a success. His ever-increasing publishing advances for stories and books kept his lifestyle close to appropriate for his station. His driven study of oratory is illustrated by the “Scaffolding of Rhetoric,” the manual he wrote for himself in his early twenties. He understood that artful and effective communication would serve his purpose better than being right on any particular political issue or strategic decision—for, after all, once a decision is made, particularly a complex and controversial one, it must be explained in ways that can inspire crowds who start with suspicion about cynical politicians.

As Roberts notes, Churchill published 6.1 million words: “more than Shakespeare and Dickens combined.” And he made those words work well for him in an age where audiences needed to be convinced and the truth had to be debated in the course of governing Britain’s transition from the Victorian Age to the post-colonial world, all while waging wars that threatened to end the nation.

The publicist’s claim of more than a thousand biographies is a little misleading, as many of those books concern a single feature of his life. Some focus on his odd childhood and distant parents. Some concentrate instead on his thrusting ambition and military service at the edges of the British Empire. Others analyze his money troubles or his driving love of secrets. His interest in guerrilla warfare and his hereditary involvement in the politics of Irish home rule. The underdog story of his careening from Dunkirk to the Battle of Britain. His foment of a “special relationship” with the United States, as perhaps the legacy of his American mother.

What Roberts understands—particularly as Churchill turns the Second World War from British calamity to Allied victory—is the role played by his writing and speaking. “History will be kind to me,” he once claimed, “because I intend to write it.” And write and speak history he did, and for good money, in a dramatic style that readers eagerly snatched up. With the ability to marshal so much ink toward his reputation, he created a first draft of history that people still want to be true. In an influential 2005 volume called In Command of History, the historian David Reynolds argued that Churchill worried about himself first, political impact second, and history a distant third. But the fact remains that Churchill’s books are still used today as the place to start on the wide-ranging topics in which he was involved.

Roberts’s work rings true on key points other biographers have not as clearly explained. Churchill’s energy, enthusiasm, and penchant for action, for example. His drive to be personally involved in everything and moral courage. His military career, his roles in both the Conservative and the Liberal parties, his big game hunting, his painting. His involvement in every great issue of his time, from aircraft development and production to the advocacy of social-welfare programs. Roberts notes that the years spent on the outside of government before the start of the Second World War afforded him the singular opportunity to provide the nation hope, at a time when no other British leader possessed the credibility to do so. And having such hope himself, Churchill—the talented speaker, the dramatic rhetorician whose patriotism burned in his heart—filled the void with both the will to fight and an understanding of why fighting was vital.

Churchill’s own published words are not the only sources now, and Roberts had access to a wide variety of never- or little-consulted records, especially Churchill’s private correspondence with the king—a source filled with his unpublished words meant for an audience of one. And it is by weaving those words into his account that Roberts provides a book worth reading now. Yes, when the first of William Manchester’s three volumes about Churchill appeared in 1983, it proved masterful. Martin Gilbert’s work, especially his 1991 Churchill: A Life, had special access. Many other books have their place on a reading list, with their focus on fascinating slices of the man’s life and work. But Roberts’s Churchill: Walking with Destiny updates and perhaps completes them all.

In the end, Roberts shows that Churchill was a reasonably good strategist and politician, but he was a giant of a communicator. The form and function of his rhetoric is what should be studied and appreciated. Roberts makes a further and final point, one that needs to be appreciated today—that despite Churchill’s aristocratic nature, he sincerely believed in British liberty as the greatest gift one generation could pass to the next. It is a point audiences today would do well to appreciate. As the American political theorist Harry V. Jaffa once remarked, “Can there be another Winston Churchill? In 1939, Winston Churchill did not think so. But, as so often in his life, he was mistaken. Let us take comfort in that.”

Joseph Bottum is director of the Classics Institute at Dakota State University. Benjamin F. Jones is dean of the College of Arts and Science at Dakota State and author of Eisenhower’s Guerrillas: The Jedburghs, the Maquis, and the Liberation of France (Oxford University Press).